How To Pick Up Women at Happy Hour 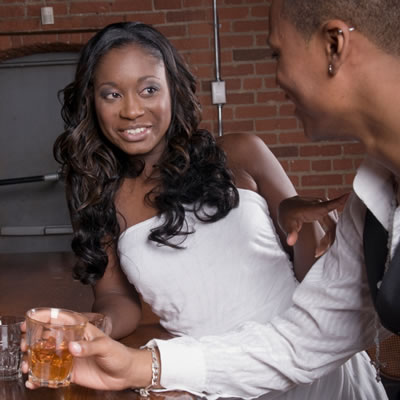 I would buy you a drink, but the way my bank account is set up is…

Word on the street is that I can make a lot of money by helping men who don’t have “game” learn how to talk to women. I’ve never been drawn to this industry or position, but funds is low. So why not?

If you know anything about the good Dr. J, you know that I take my happy hours very seriously. Unfortunately for a lot of men, happy hour is something they dread. They choose to spend most of their time annihilating an open bar or talking sports with the guys. What about the guys who want to talk to the eye candy instead of just looking? It’s a daunting task, but it can be done. I can’t give you all the secrets. But if you take my previous posts on how to talk to women and these five tips, you’ll be on your way.

Before we get started, let’s get in mode. Repeat after me,

The Single Man’s Credo: The answer is no. If I don’t say anything to her, I will not have her number. She will not know my name. Therefore, the outcome that I fear the most has already happened. There’s nothing to fear but fear itself. YOLO!

Good Idea: Talk loudly to a friend about your love for a popular TV show that women enjoy. For example, “I can’t get enough of How I Met Your Mother. I can watch it for hours.” This will pique the interest of the female patrons in the venue.

Bad Idea: Talk loudly to a friend about your love for a popular TV show that only men watch. “What are you talking about? The match was fixed! No way The Rock beats John Cena.” This will reveal that you’re still watching the same TV shows you watched in grade school. Do you watch Power Rangers reruns too?

Good Idea: Plan to wear a nice outfit to happy hour after work. Pick out a nice (but not flashy) suit with a matching tie and socks. Please match your socks. There’s nothing worse than a peek at your socks to reveal there’s not a color in the lounge that matches them.

Bad Idea: Showing up to happy hour in your UPS uniform, or Dickie’s and Nike boots. I can’t knock the hustle, but throw a pair of khakis, a polo, and some loafers in the back of the van before your route.

Good Idea: Tipsy enough to step outside your comfort zone. Having a couple drinks before you work the room is not a bad idea. It’ll loosen up your shoulders, relax your facial muscles, and reduce your inhibitions.

See Also:  A Man's Dream: Can You Get to the Damn Point?

Bad Idea: Tipsy enough to step inside everyone else’s comfort zone. Having a couple drinks, a couple shots, and a couple beers before you work the room is a horrible way to approach anyone. Your speech is slurred, you’re stumbling all over the place, and most people just wish you would leave.

Tip #4 – Make sure your team is supreme.

Good Idea: Going out in a mixed group. A mixed group of men and women is a good way to provide yourself with a safety net for the night.

Bad Idea: Going out in a group of all guys. The worst feeling for a woman is to be stared at like a piece of meat. Imagine how the scene looks, it’s a group of men standing in formation salivating over a young lady. Not a good look.

Good Idea: Every man should have an adult beverage that he calls his own. It shouldn’t be a rail and mixer, it should show that he has culture. You’re not going to just order Henny, you’re going to order Privilege on the rocks… just joking. A man’s drink should be his favorite, not everyone’s. And it should be something that he can handle in moderation. For example, Mr. Spradley’s Old Fashioned.

See Also:  AskMen: 6 Ways to Determine How Much Your Relationship is Worth

Bad Idea: Buying bottles. No woman takes a man seriously if he’s willing to buy a bottle of liquor with a 1,000% up-charge. It’s okay for a special occasion, but not every night. How can you save for a wedding when you spend $2K a week in the club…on a Tuesday?

I know most of you are thinking “Isn’t most of this common sense?” You would think that right? It’s not. Ask women about the men they meet at happy hour. They’ll tell you that they hear some of the darndest things out of their mouths. I attribute this to the fact that most men always want to do something to stand out in the crowd. That really doesn’t make much sense. A woman wants a man, not a unicorn. Take these five tips, try them out at your next happy hour, and report back on your results. Have a good one.

Speaking of happy hours, SingleBlackMale.org is planning an event  in Washington, DC in the coming months. Stay tuned, more details to come in the next week.  As always, we really appreciate your support.

previous The Black Folks Enrollment Form: For Non-Black Folks
next The Weekly ‘You Need to Chill’ Awards: Rihanna, Cold Weather, Drake, Howard U, Beyonce and Obama