Home Announcements Why Going to See “Think Like A Man” is a Good Idea
Announcements
Featured
April 19, 2012 The Mighty Most 40 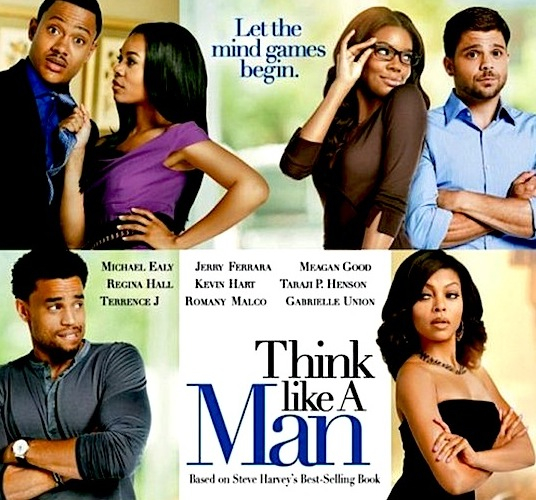 I never read Steve Harvey’s “Act Like a Lady, Think Like a Man.” I didn’t read it for a number of reasons. First, I have an aversion to self-help books of any sort–but particularly ones that purport to offer advice on love and relationships—just not my cup of tea. Second, I didn’t read it because (like some of the characters in the movie) I didn’t trust the source. My general response when folks started talking about the book went something like this: “Steve Harvey … from Family Feud and “Kings of Comedy,” a guy who’s been married three times, has a book that’s supposed to help women reach their relationship goals? Yeah, I’ll pass.” Third, and most importantly, I didn’t read the book because, well … I’m not a lady. All these are reasons why I didn’t read the book and they are also reasons why I responded with trepidation when it was announced that a movie would be made of the book. In my mind, the chances of the movie being good, when, in my mind, the source material was inherently flawed, seemed low. Up until about a week ago, I had no intentions of going to see the movie.

I’ve seen the movie, but I didn’t pay to see the movie. I saw the movie along side the lovely Lala Anthony and a few other folks in the blogsphere as part of a screening sponsored by the good folks at X-Rated Fusion Liquor, hosted by the awesome PR Team at LuxeLife Media. They gave me candy, popcorn, tons of free alcohol and the company of lots of cool people.

The folks behind “Think Like a Man” are breaking bread. As you might notice, there are ads for the movie on our blog. Those ads are paid for with money. That money eventually goes into bank accounts and is eventually spent on keeping SBM fresh and sexy.

Why You Should See The Movie:

All that said, the freaking movie was absolutely hilarious. Seriously. If you’ve read me around these parts for a while, you know I’m not really into comedy. Hell, I’m not even really into laughing too much. Generally speaking, I’m the kind of guy who calls movies “films” even though he knows it sounds kinda douchey. If I’m going to lose 2 hours of my life sitting in a dark room getting fat on junk food, I want to watch something that’s going to leave me deeply affected emotionally. Or at least something so suspenseful that it has me on the edge of my seat till the very end.

Still, I walked into “Think Like a Man,” begrudgingly, expecting to be underwhelmed by a typical, predictable black movie with a half a**ed script, poor, cliched dialogue and unrealistic, emotionally exploitative plot twists. I was dead wrong. The movie was funny, like, laugh out loud despite yourself funny. It was so funny that at times you felt like you were missing certain jokes because you couldn’t hear them because the crowd was still laughing so hard at the previous one.

See Also:  I Hate Talking On The Phone

Are there cliche’s? Yeah. Is Terrance J a little extra sometimes? Sure. Does it at times take advantage of just how drop dead gorgeous Meghan Good, Taraji P. Henson, and Gabrielle Union are … of course. There’s even a gratuitous shot of a well known and oft desired black actor hopping out of an expensive car in super … SUPER slow motion. Still, writer Keith Merriman and director Tim Story have done such a great job creating realistic banter and shot the idiosyncrasies of black male and female interaction so accurately, that even scenes snatched straight from the textbook of bad black film making, come off as if the film is poking fun at its viewer’s expectations, its genre, and by extension, itself. It does so in a way that respects the modern black moviegoer’s intelligence and ability to appreciate quality film, while also indulging some of our less evolved guilty pleasures … like seeing beautiful people our color quote Plato while sipping an expensive Merlot, in beautiful apartments, with good jobs and nice cars.

But besides all that, and more to the point – the movie is funny, really, really funny. Kevin Hart steals the show with his signature style of conversational, reality based humor. Too often in films, the dialogue amongst a crew of black, or mostly black men is overdone. The slang is often a few years behind, and the delivery makes it painfully obvious that the actors don’t speak that way in real life. If you’ve ever seen a movie starring Shamar Moore, you know what I mean. ‘Think Like A Man’ avoids this by allowing the actors to stay in their comfort zone. They don’t go overboard hamming it up, nor do they sound like they’re trying to be Bryant Gumbel or somebody. It’s realistic. The movie also has an abundance of cameos … more cameos than the entire first season of “Single Ladies,” still, the cameos are almost all laughter inspiring instead of cringe inducing. I know it’s a cliché to say that something is a perfect date movie … but this is a perfect date movie.

See Also:  Signs That She's a Ride Or Die Chick

I started off this post by offering you all three points of disclosure I thought it important to mention before sharing my thoughts on the movie. The truth is, all three of those points would have been irrelevant if the movie sucked. If the the movie was terrible, we would not have placed ads for it on the site, nor would we be encouraging you to go see it. But suck it did not. So you all have suffered through my over-sharing so that I can sleep well, integrity in tact. This weekend, hit up a happy hour and then take your guy friend or lady-friend to see Think Like a Man. You won’t regret it.

tags: think like a man
previous Why Men Don't Attend Anything That Smells Like a Singles Event
next Typical Mistakes All Men Make In Dating: Part I