The Western Conference playoffs will be tightly contested in the later rounds. There are many good teams out west, but the match-ups don’t lend themselves to many tight series in my opinion. Here’s how I see this side of the bracket playing out: 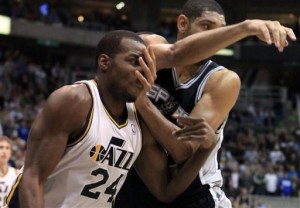 San Antonio Spurs – The Spurs have to be considered the surprise of the season for many reasons. Very few thought their veterans would survive the shortened schedule. Coach Gregg Poppovich managed his team perfectly all season; opting to rest his team in key situations. The result is the top seed in the West, and talented young players who played a ton of minutes throughout the year. The only concern with this team is height. Are their front court players enough versus the toughest opponents?

(8) Utah Jazz – The Jazz were a surprising team in its own right this season. As a relatively young team with a very young coach, expectations were low coming into the season. The team’s depth in the front court, and quick development of young players helped lead this team to the playoffs.

Prediction: Al Jefferson and Paul Millsap will have to be HUGE for the Jazz if they will contend in this series. They have the potential to give the Spurs’ big men problems, but I don’t see it. The Spurs are too much and will win in five. 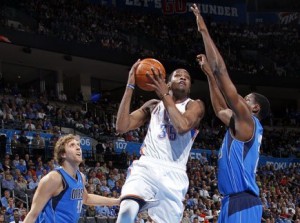 Oklahoma City Thunder – The Thunder are the team many picked to come out of the West. If they’re going to do that, they’ll need to get through the defending champions first. That’s a tough order. If both teams play their best, the Thunder will win pretty easily. If Russell Westbrook forgets that he’s Robin and Kevin Durant is Batman, things will end badly for them.

Dallas Mavericks – These Mavericks are hardly the same team that won the championship last year. Owner Mark Cuban opted to save money this year by letting key contributors leave in the offseason. The team can do well in this series, but their margin of error is slim. Dirk will need to dust off the Superman cape he had in the playoffs last year to pull off the upset (a lot of superhero imagery in this series apparently).

Prediction:  Russell Westbrook plays under control, and the Mavericks won’t have enough firepower to match the Thunder. Oklahoma City in five. 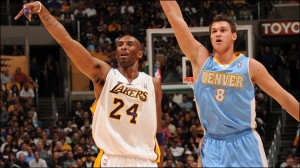 Los Angeles Lakers – The Lakers have had a wild season so far. From starting Josh McRoberts to acquiring Ramon Sessions to Coach Kobe to “The Elbow,” it’s been a roller coaster. The Lakers have the best front court in the West, and one of the best players of all time on the wing. What could go wrong? Well, their depth is a concern, so missing Metta World War Peace for the series will hurt.

Denver Nuggets – The Nuggets have a good team, but who is their best player?  They count on big contributions from whoever is hot on a given night, and this makes them unpredictable. While they have a good team, their only match-up advantage in the starting five is Danillo Galinari over Matt Barnes.

Prediction: The only way the Nuggets can compete in this series is to speed the pace and try to outscore LA. This will mitigate the advantage the Lakers have down low. I can’t see it. I also can’t see any team with JaVale McGee making it to the second round. Lakers sweep. 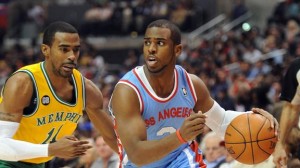 Memphis Grizzlies – So many people have picked Memphis as their “sleeper” that they are no longer underrated. They made a surprising run last year without Rudy Gay, and seem poised to do the same this year with a (mostly) healthy squad. Marc Gasol and Zach “Z-Bo” Randolph anchor the front court, while Gay, OJ Mayo, and Mike Conley handle the wings. This is a dangerous team whose only real weakness is outside shooting.

Los Angeles Clippers – Lob City had an up and down season. After expectations were raised very high with the pickup of Chris Paul in the offseason, the Clippers struggled to find their identity throughout the year. Losing Chauncey Billups has hurt, but Randy Foye has proven to be a capable fill-in. They’ll need to play a great defensive series, and keep games close for Paul to takeover in the fourth quarter.

See Also:  Pedicures, Happy Endings, and Why I Can Understand Men Paying for Sex

Predication – This is the best series in the West on paper. I see a back and forth series with Memphis taking it in seven. CP3 will keep the Clippers in this series, but the Grizzlies are more complete. And honestly, do YOU trust Vinny Del Negro to make the right decisions in a tight series. No way.

What say you, SBM Sports Fans?  Do you think any of the underdogs can compete in the West?  What team has the best chance for a first round upset? I can’t wait to see what happens. I predict a lot of long nights and struggle in the mornings at work.