Last week, I embarked on a two-part series on typical mistakes that men make during dating. Yeah, some of the stories from last week were kind of funny, embarrassing moments from elementary school. If you missed it, check it out here.

Have you ever been in summer school? If you have, then you would know that there is absolutely nothing to do during summer school. You’re in class for about 3-6 hours a day; for the rest of the time, you are bored. Only about 10% of the campus is there, and if you’re a person of color, that just makes your social life dismal. The best thing you can hope for during summer school is for someone to visit you. A friend of mine had a friend come in town for the weekend. A young lady attending summer school at another college took a weekend off to visit. The friend was bad. Bad meaning good. On a scale of 1-10, and I’m being modest, she was an 11. We all plan a double date, or what in college was really a “let’s all hang out and do stuff” night. Dating is such a strong word in college.

I’m pretty sure we all went to the movies and then Red Lobster because there wasn’t much to do in the summer. We stopped by the liquor store, got some wine coolers and a bottle before returning back to their apartment to drink and chill. That’s when things got weird.

Everything was cool and then we decided to watch a DVD. At one point during the DVD, my friend got tired and left with her boyfriend to go back to his place. We finished the movie and then I started to feel awkward. I didn’t want to send the wrong message and being in my friend’s apartment with her friend from out of town seems odd. I interpreted this to mean the night was over. So I left. Once I got home, I realized that I left the backpack I used to smuggle the liquor on campus at my friend’s apartment. I texted my friend, but I didn’t get an answer. I decided to just go back over and get the backpack myself. I knew a way to get in the apartment without needing a key. I got back in and then I noticed that the girl from out of town had changed into less clothing than before. I said, “Hey, it was fun hanging out today. Did you have a good time?” She replies, “Yeah, I wish things hadn’t ended so early. I had a great time though.” Then I said, “Yeah, I usually like to hang out later, like I’m not even tired right now. Are you getting ready to go to bed?” She said, “I’m not tired, but I guess I am.”

I, then replied, “Well, cool. I guess I’ll see you in the morning,” and left. I get back to my apartment and I text my friend that I went and got the backpack so ignore my earlier text. She responds, “Wait, why are you home right now?!” #Facepalm.

A couple of my boys and I went down to Miami for a few days to do some hanging out on the beach and get some clubbing in. We didn’t have a rental car; therefore, we had to rely on only going to places within walking distance or catching a cab. At some point on Sunday, I completely lose recollection of everything going on after a few margaritas sitting by the pool. I remember the following in flashes:

The club was a lot of fun. Most of what happens at the club is not important. The only thing of note is that while at the club, this happened:

I found myself in between relationships and starting to date again. I was just trying to get my feet on the ground, so I figured I’d start dating casually– sort of like an offseason workout before really diving back into the dating world. I met a young lady and before long, our casual dating started to become a bit more habitual. I couldn’t read this girl very well, though. For starters, she told me in these exact words, “I really like being single. I like being able to go where I want and do what I want, when I want.” In my head that meant, “Don’t do anything stupid like ask her to be your girlfriend.” Full disclosure: I hadn’t planned on doing anything stupid, but it’s very few and far between that you find a situation like this one. I figured I’d do my best to just shut up and be quiet. 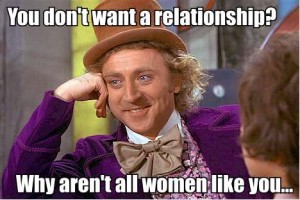 Over the next few months, we hang out once every couple weeks. We would go out to dinner, movies, or just stay in. It was nothing serious. We went out one time to this lounge in DC and we had a few drinks. I’m starting to realize that almost all situations that turn sour start with, “we had a few drinks” – more like eight. As we’re hanging out, she starts showing signs of jealously. She won’t stop touching me, which bothers me– I’m an only child. She’s giving me the only eye; that doesn’t bother me so much, but we were in public and she was blatantly obvious. It wasn’t long before she reached the point of full on annoyance. That’s when I said something to her, which probably sounded like, “Why are you acting this way?” but it more than likely sounded like, “Stop acting like a complete retard!” to everyone else. Suddenly, the weather forecast changed…

Dark and cloudy, with a 100% chance of rain… and now she’s crying in public.

I walked away, but I knew then that she had developed strong feelings for me. I didn’t say anything about it, I just apologized and we went home. The next day I was completely baffled. She told me that she liked being single, but she was acting like an emotional wreck. I did what any other man would have done in my situation. I just shut up and stayed quiet about it. After that night the times we would hang out would happen less frequently, to the point that we hadn’t seen each other in a few months. We had both moved on to new relationships or situations. We met up for happy hour after work one time and she explained to me in these exact words that I’ll never forget:

“Why didn’t you just ask me to be your girlfriend? Every girl says they don’t want anything serious, but it’s a lie. I just said that because I didn’t want to freak you out. I really liked you, but I just got the feeling that things were going nowhere.”

I had this look on my face like, “But you never said anything like that to me.”

I mentioned in the comments last week that I got wiser because of each of these stories. I learned to stop simping, but that doesn’t mean that I don’t do nice things for people. I struggle with it, I try not to do things just for a reaction and pride myself on taking care of the important things. I’ve probably overpaid for a few dates or bought some expensive piece of jewelry for someone I’m not with anymore. I have neglected to share the details of a Valentine’s Day date with my significant other and came home to an angry woman. I don’t consider all those mistakes. I’ve learned some valuable lessons along the way. I’ve learned that mutual respect and communication are the key success factors for any relationship to work. I learned that Aaliyah’s precious soul gave us the best dating advice ever, “If at first you don’t succeed, dust yourself off and try again.” Most importantly, I learned that if you truly practice and believe in the golden rule to do unto others as you would have them do unto you, your dating mistakes and successes will always make you a better person.

See Also:  How to Take a Woman Out on a Proper Date

New Mix today from Carver The Great titled, Snapbacks & Tattoos, right-click and download it here, or stream it below: