We hear a lot about women burning men’s clothes, keying cars, poking holes in condoms, raking faces, pulling out men’s teeth, filing fake charges, and pilfering men’s wallets in the courtroom, but we don’t hear too much about the crazy things men do…sans the ones that take it too far. The truth is, men can be just as crazy as women, but we just don’t like to admit it because that ain’t cool. Crazy ain’t cool unless it’s CrazySexyCool. You miss those days don’t you? Yeah, me too. Less gimmicks, more music. Anyway… check out the crazy things men do.

I was having a conversation recently about some of the crazy things a lot of us (men) used to do when we were young whippersnappers. At the time, the actions seemed logical. But there’s nothing logical about emotion even though we’ll swear that the craziness was justified in the moment. Looking back though, we realize that we kinda sorta were really possibly maybe wildin out (said with as much hesitancy and awkwardness as it reads).

You wouldn’t know that now because the average guy has learned from the errors of his ways. Why do you think we don’t ask too many questions? Do we ask women not to share certain things with us? Why do you think we have no interest in looking at your phone and want it as least 10 feet away when it rings? Why do you think so many dudes say Drake is wack? He’s striking suppressed nerves and making many of us remember the unsavory aspects of our younger selves.

We know where our minds may go, so we don’t inquire about anything that might turn us green. After all, every man knows about the Hulk gene. We’ve probably showcased it along the way, but just not to you. And that’s the basis of today’s post. I don’t expect everyone to get everything below, **turns and looks at camera** but I expect everyone to get everything below…cuz everybody knows somebody that’s done one of these things or some variation thereof. Let me share with you five generally crazy things men  have done that we don’t admit because crazy ain’t cool.

The following takes place circa 2001 between a man unsure of his girl, and his friend that regularly cheats.

Unsuremont: Yo, I don’t trust this chick sometimes.

G-Conscience: Dog, just do what I do to ease my mind. Hop in the whip, drive by her place and see if her car is in the driveway. If it ain’t there, you got some questions to ask. Nah mean?

Unsuremont: Yeah, you right. *Daps up GC and heads outside*

Impressionable and unknowingly insecure, ‘mont hops in his undersized ‘99 Sentra and takes a 30 minute drive to see a Neon, while blasting Black Rob and hoping he doesn’t get there and have to say whoa.

Jaquarius rings his girl’s doorbell at 11:45pm on a Tuesday talking about “Hey baby, just wanted to drop by and say I love you before going to bed three towns over.” 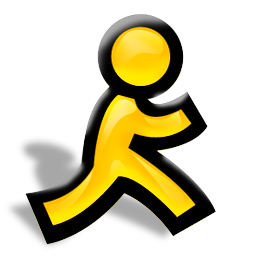 The AOL Instant Messenger Active, Idle, Active, Idle with No Replies Situation (Circa 2002)

AOL Instant Messenger (AIM) died a slow painful death at the hands of gchat. I mean…AIM’s still technically around, but you don’t log onto that unless you want spam from xxsmoothbooty86xx. Not too long ago — maybe yesterday for you — that idle business (grey name) was a problem. If you sent your boo a message, saw them go active then idle, then active, then idle again with no reply to what you said, there was some splainin’ to do. It was like “Yo, I know you saw my message. The f*ck is going on over there?” And let that name sign off then you hear a door open on your computer speakers like two hours later. You back at your computer desk HULK SMASHING your e-Machine’s keyboard and flirting in another chat box with someone you had absolutely no interest in. Yep, dudes did this too.

See Also:  Battle of the sexes: The Power of the good good

DeadAIM was one of the first AIM additions that allowed for tabbed conversations and chat-logging. It’d set up a folder in Documents that contained another folder called Chat Logs. People didn’t really lock their computers back then, sooo…yeah.

We lock our computers now.

It was a gateway to arguments and subsequent breakups. And as we all know, if you look hard enough for something, you’ll find it.

In full disclosure, I set up an Ex of mine that I suspected of snooping. I told her I was using DeadAIM and how cool it was, said I was going to the store, then went outside to my bedroom window to see what she’d do. Within 60 seconds, she was at my computer and in the chat logs. Little did I know I’d set myself up for failure along with her. I turned into the Hulk, tried climbing in the window, got stuck in the frame, and scraped my knee.

Call waiting was cool until cell phone companies started letting callers know the person was on the other line. This led to men dialing at times they wouldn’t normally dial and a whole lot of “I was just calling to say good night” and one-ring missed calls.

In summary and as you can probably tell, we’ve all done some “crazy” ish over the years. And “craziness” hasn’t went away, it’s just evolved. The same stuff men and women were doing 10 years ago, they’re doing today but in a different form. It never really goes away for a lot of us. We just know how to bury it.

By the way, I didn’t define crazy because it’s so subjective and recklessly tossed around by both sexes. Well, that and I wanted to hear (read) what you have to say. Ladies and gents, aside from the clinical, how do you define crazy?  Are the behaviors listed above “crazy” to you? Who do you think takes the overall crazy crown? Any other examples of “questionable” behavior come to mind that I didn’t cover? Let me know in the comments.

P.S. SBM does not condone or support any type of violence. Please don’t take this post left and start talking about OJ or something. Just enjoy it and keep it the way like crazy things men do!

tags: craziness foolery Men too cool for school Women
previous Secret Service: Why Men Always Pay For Sex
next SBM Sports: Is Mayweather's Mind In It to Win It This Weekend?