Home Featured SBM Sports: What to Do with the New York Knicks?
Featured
Sports and Entertainment
May 8, 2012 Joe Sargent 27

SBM Sports: What to Do with the New York Knicks? 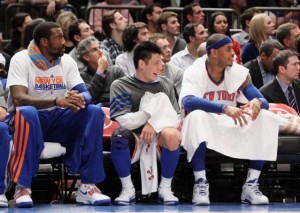 While the Knicks managed to delay the inevitable on Sunday with an 89-87 win over the Miami Heat, it’s obvious that this team needs work before it can be considered a championship contender.

The focus of the roster is on the two “superstars,” Amar’e Stoudemire and Carmelo Anthony. The Knicks paid a steep price for both players, who were supposed to lead them to wins, awards, success, championships, a Nobel Prize, etc. Instead, the Knicks are stuck with a 7th seed in the Playoffs, and down 3-1 to a team no one really thought they could beat. (I mean…come on, Knick fan, we can be honest about this).

That said, it’s time to think about what to do to shape this roster into a contender. Thankfully, I’m here to play General Manger. My qualifications include several Fantasy Basketball trophies. I know talent. Anyway, here are the Knicks realistic options for the future:

This option leaves the Knicks essentially where they started the season. The difference is that now they run Mike Woodson’s offensive system instead of the point-guard-centric approach they used under Mike D’Antoni.

This option highlights the Knicks’ biggest problem: Amar’e and Carmelo aren’t a great basketball match. They’ll never be as good together as they could be apart. Amar’e is best working off of a strong guard while Carmelo is one of the league’s best one-on-one scorers. That just doesn’t add up.

See Also:  10 Red Flags in Dating: He Might Be a Loser

If the Knicks keep together the roster that they have now (and pray that no other kneecaps explode), they’ll end up right where they are: mediocre.

Remember Linsanity? How much fun was that? In this scenario, the Knicks handed the offense to Carmelo and Jeremy Lin. The only problem is, like Amar’e and Carmelo, neither is at their best playing off the other. Lin used the pick and roll to become a global sensation this season. In theory, Carmelo could run the pick and roll with Lin, but he’s shown us over the past 8 seasons that he prefers the ball on the wing with his teammates spread on the opposite side of the court. Shucks.

Another issue here is what the Knicks could get if they trade Stoudemire. Will teams see him as an injury prone player who has regressed recently? Or will they see him as the MVP candidate from the beginning of last season? The risk associated with trading for Stoudemire will scare just about any team. That means they’d have to deal Amar’e for an unproven player or one with his own sets of issues. Basically, they are trading their high-mileage sedan for someone else’s. At least you know the problems with your car; no sense trading it for a lemon.

Carmelo and Lin aren’t taking the Knicks to the Finals. Next!

This makes more sense right away because you could certainly get more for Carmelo than Amar’e at this point. Also, Amar’e was a legitimate MVP candidate through the first half of last season (see above). Could he really have fallen off this badly in 18 months? It makes more sense for the Knicks to try and maximize the chance for Amar’e to succeed rather than trade him for a player that isn’t as good.

In this scenario, the Knicks trade Carmelo for a young, talented player and draft picks. Let’s say Eric Gordon of the New Orleans Hornets and one of the two top 14 picks the Hornets own in this year’s draft. Could a lineup featuring Lin, Gordon, Amar’e, Tyson, and Shumpert compete? I think so.

The primary weapon would be the pick and roll featuring Lin and Stoudemire. This worked to great effect earlier this season. Add Eric Gordon’s ability to shoot from outside and create his own shot, and you have a dangerous offense where almost anyone can succeed (except Jared Jefferies…never Jared Jefferies).

The defense would remain strong with Tyson Chandler as its anchor. Eric Gordon is a better defender than Carmelo, so anything he can add makes them even better than this past season. Don’t forget, the Knicks were pretty good this year on defense. Becoming even stronger on that side of the ball is a huge plus.

Those are my thoughts. What do you think SBM Sports Fans? Is there anything that can get the Knicks over the hump? Actually, Knicks fans are pretty annoying and their team hasn’t won’t a ring since 1973…do the rest of us really want them winning a title?