How Can Women Avoid The Friend Zone? 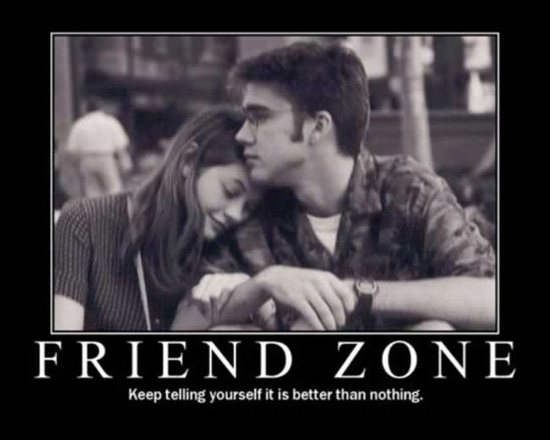 I was hoping you could offer me some tips about how to avoid being the “homegirl”. I have two older brothers and was a tomboy while growing up. I enjoyed playing with trucks more than I did dolls. I loved being “one of the boys” and bonding with my brothers while watching wrestling or playing catch at the park. In high school and college, I began dressing more feminine and my male friends would sometimes comment that I looked nice in this outfit or that outfit. They would never ask me out on dates though a close male friend told me once that I give off the homegirl vibe. I laugh and joke like “one of the guys”.

I enjoy sports and appreciate good practical jokes. I wonder if my down to earth demeanor takes away from any sort of attraction my males friends could potentially have for me when initially meeting me. I am not interested in dating any of my current male friends, I was just wondering if there were things that I could say or do (without changing who I am and becoming another person entirely) in order to not continue falling into the homegirl category with males that I meet in the future.

I don’t think you have to change anything about yourself. You love sports, you have a sense of humour, and you are down to Earth. What man wouldn’t love those qualities?! I can understand you launching a preemptive strike against any man tagging you with the “homegirl” label, especially if you find them attractive. However, there are some points to consider given your situation:

See Also:  How A Man Can Avoid The Friend-Zone

I know you said that you have no interest in dating your male friends. You also said that a close male friend told you that you give off the “homegirl vibe.” I don’t want to question your friendship with these gentlemen, but I don’t know if your friend kept it all the way real with you. We have discussed the concept of opposite sex friendships here, over here, and right thurr. After reading through those excellent pieces [||], and through my own experiences, I think that men and women can be friends. How they end up as friends is a different story. To me, you can be friends with the opposite sex if either a) there’s no attraction whatsoever b) there was a previous intimate relationship of some sort, and you two decided that it would be better to remain platonic or c) you are family of some sort.

Most male/female friendships are born out of some type of attraction or admiration. When men talk about their female friends, even if they wouldn’t ever touch them in their sweet spot, they will acknowledge that you have “touchable” qualities. Unless we are blood related (and in the case of the Lannisters and Targaryens this doesn’t matter), we won’t deny that a woman is attractive. When your male friend tells you that you “give off a homegirl vibe”, does he #REALLYMEAN that HE doesn’t find you attractive? There’s a difference between an attractive woman who doesn’t appeal to a man’s preferences, and an unattractive woman. I know you might say “no sh*t Sherlock” to my last statement, but it’s very poignant to this discussion.

On another note, your male friends might “know” you well enough to know that trying to do anything other than seriously date you is not an option. When we are friends with women, men will usually hear their relationship drama, have a better understanding of women’s thought processes, and get a #nofilter perspective on a woman’s taste in men. Men have a heart when they truly value a woman’s friendship, and will weigh the pros and cons of a physical relationship with you before making a move. Maybe they don’t want to rock the boat. Conversely, there could be some trait you possess that raises red flags for men and they know, but don’t want to tell you. This is when you need that belligerent, well meaning guy friend who will look you dead in the eyes and say “you cute, but that moustache gotta go ma!” You can question a friend’s tact, but you can’t question their heart.

Women rarely have to do anything but be themselves when they want to attract attention. As the poet Chris Rock once said: “women get offered d*ck every day!” I don’t have enough information to determine whether your actions cause you to get tagged as “the homegirl.” However, my advice would be to ask your realest guy and girl friend why they thinks you get friended a lot. Ask them to keep it 100, and pull no punches. be prepared to hear anything, accept the constructive criticism, and see what you have to do to improve your situation. It may even behoove you to beseech people who DON’T know you well, so that you can get an unbiased and respected opinion. If you have to switch up your fashion, your hair style, hit the gym, or perform any other reasonable task to avoid the Friend Zone, embrace the challenge and succeed. There’s no way that the Friend Zone should pertain to women especially if they look good, have a good personality, and do the basics. Women created the Friend Zone as a purgatorial society for emergency d*ck and platonic male companionship. When your own invention becomes Skynet, and you become a homegirl, it has to be more about you than the men. Figure that out, solve the problem, and return to using your feminine wiles to achieve dating success.

See Also:  How Can Women Escape the Friend Zone?

Ladies and gentlemen, how can a women avoid being a homegirl and stuck in the friend zone? What actions, either physically or mentally, can women undertake in order to appeal more to men? Would you rather go to your close opposite sex friends, or acquaintances, to determine whether you have friend zone characteristics?