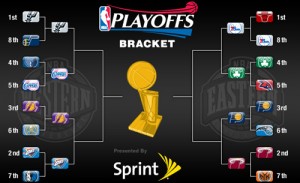 As we head into the second round of the NBA Playoffs, I can’t help but to reflect on all of the injuries that occurred in the first round.  An injury to Derrick Rise is the only reason I did not receive a 100% on my first round Eastern Conference predictions…smh!  Anyway, it’s time for Joe Sargent and me to update our predictions: 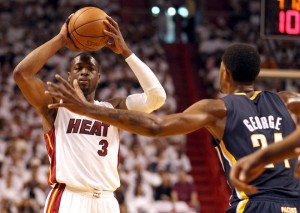 Indiana Pacers: The third-seeded Pacers came into this series with the Eastern Conference’s best record over the final 20 games of the regular season. The Pacers are regarded as one of the most physical teams in the league and rank among the NBA’s leaders in fouls.  They have three NBA All-Stars (West/Granger/Hibbert) in their front court, which has been viewed as a weakness.  The Pacers have a balanced attack with Danny Granger, George Hill, Paul George, Leandro Barbosa and Darren Collison on the perimeter.  While David West, Roy Hibbert and Tyler Hansbrough dominate inside the paint.

Miami Heat: Thus far in the playoffs, the Miami Heat have been as advertised.  Lebron James has been the most complete player in the league while dominating the ball on both the offensive and defensive side.  Dwayne Wade is the best player in the NBA at making a difficult shot look easy.  Chris Bosh continues to keep defenses honest against James/Wade while being a deadly weapon with his mid-range jump shot. He’s out with the ab injury, so we’ll see how that goes.

See Also:  Instant Gratification: We want what we want, when we want it!

Mario Chalmers’ defense and shooting has made him arguably the Heat’s fourth best player.  The deeper this team goes into the playoffs, the more they are going to need Shane Battier, Joel Anthony, and Mike Miller to provide them with constant play off the bench.

Prediction:  Hibbert provides the Pacers with an advantage inside the paint, however, he tends to get in foul trouble because of his inability to consistently stay with ball handlers in the pick-and-roll or control his body around the rim.  This will be an interesting game of chess between two young coaches but I believe the Heat will call checkmate in five games. 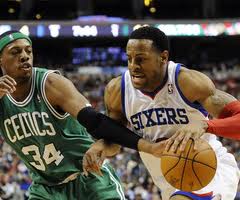 Philadelphia 76ers: The surprise team in the Eastern Conference semifinals.  Who would have ever thought this team would have made it this far this season?  After Game 1 of the Bulls/76ers series when it was announced Derrick Rose would be out for the reminder of the season, I still had the 76ers as a long shot to win that series.  However, the 76ers are in the second round for the first time since the Iverson era.  The 76ers have plenty of depth in the back court with Andre Iguodala, Evan Turner, Jrue Holiday, Lou Williams and Jodie Meeks. Spencer Hawes was the difference in the Bulls series.  Hawes provided the 76ers with an inside presence that they tend to sorely lack.

Boston Celtics: Father-time must have never gotten this team’s address because they look posed to make a deep run in this year’s playoff.  During the second half of this season, Kevin Garnett was moved from the power forward to center position and he has been one of the best players in the NBA.  Ray Allen and Paul Pierce are battling injuries, but both seem to be getting back into game shape.  Avery Bradley provides the Celtics with a tough on-ball defender and Rajon Rondo does EVERYTHING for this team. Rondo has become a complete player since developing that mid range jump shot.

Prediction:  The 76ers need to make this an up tempo game to stand a chance against the Celtics.  In this year’s playoffs, the Celtics have yet to play with any urgency. However, the Celtics continue to do just enough to win.  The lack of presence on the inside has the 76ers at a huge disadvantage.  The Celtics need to play with some urgency or they will lose the series. With that said, the Celtics will win this series in five games.

So SBM readers, what do you think about my second round prediction of the Eastern Conference?  Do you agree with my picks? What team has the best chance for a second round upset?  Which series will be the most entertaining?

See Also:  SBM Sports: The Five NBA Teams that Could Win It All in 2012