Three Reasons to Care About the San Antonio Spurs 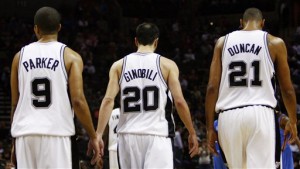 All basketball fans know the Spurs have been great for over a decade. The calling care of their brilliance is its methodical precision year in and year out that’s represented by Tim Duncan, the understated superstar of our generation. Because of their expected success and a lack of polarizing stars, the Spurs have been tuned out by just about everyone. Spurs games are expected to be low-scoring and frustrating to watch.

I am here to throw out this stereotype and tell you why you should give the Spurs (the 2nd highest scoring team in the NBA) a chance. Here are three reasons to give a crap about San Antonio:

The Spurs are damn good. – Whether it’s the New York Yankees or New England Patriots, sports fans find dominance compelling. The Spurs have been so good this year they deserve our attention. Spurs coach Gregg Popovich chose to rest his starters at several points during this condensed season to keep them well-rested. No big deal, except they gave up on an 11-game winning streak twice to do so. They were so bored with winning they opted for rest over W’s. Well, sorta, they still ended up with the league’s best overall record.

To date, the Spurs have won 28 of their last 30 games including no losses in the Playoffs. We should all be watching the Spurs to see how good they can get. They are the anti-Bobcats, the team most deserving of our attention. 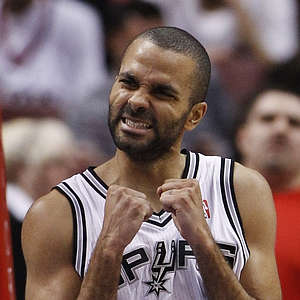 Tony Parker: Scurge to Women, Hero to Men – Tony Parker makes the Spurs fun to watch because of the drama he created over the past year despite surprisingly few headlines. Parker was famously married to actress Eva Longoria until an abrupt divorce in 2011. Around the same time, rumors circulated that Parker slept with the wife of Brent Barry, his former teammate!

For women, this makes Parker fun to hate. Women love to band together around a jilted comrade. This is why divorce parties and many romantic comedies exist. Rallying around women who were wronged gives fellow women fuel. Ladies, you should watch the Spurs to root for Parker to lose, blow out his knee, and cry on national television. Lots of men watch LeBron James for this very reason. Popular television commentator Skip Bayless has made a career from it.

For men, Parker is watchable for a similar yet opposite reason. This season, the Frenchman played the best season of his career. He finished 5th in MVP voting! Parker’s divorce, followed by a career renaissance makes him a hero. Fellas, watch the Spurs, crack a beer, and raise a glass for Tony Parker, Bachelor of the Year.

They’re not as boring as you think. – If this isn’t enough to sway you, consider their style of play. The Spurs play the type of team basketball you hope for when you run pick up.

The team spaces the floor with the league’s best group of three-point shooters; a group led by Matt Bonner 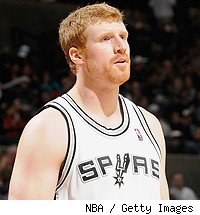 (the Irish bartender looking gentleman on the right). Bonner isn’t fast, can’t jump, and plays basically the most stereotypical game you can imagine. He is what we would be on an NBA court. How can you not root for that? Look at that (lack of) muscle tone. Bonner is the Homer Simpson of the League.

Besides the barrage of three pointers, the Spurs have one of the league’s craftiest players in Manu Ginobili. If you can look past the flopping, Manu gets to the rim like few others (Pause). He creates balance on the floor with a flair that is genuinely fun to watch.

The maestro of it all, Tony Parker runs the team’s motion offense beautifully by incorporating others while scoring on jumpers and his trademark teardrop floater. He keeps the offense moving, unlike many “stand and watch” isolation offenses throughout the league (Knicks). Basketball is just more fun that way.

Look, the Spurs have earned their boring reputation over the years, but they’re actually fun to watch — this year in particular. If you enjoy good basketball, you will definitely enjoy this team. They will be playing the Oklahoma City Thunder next, and I am giving you fair warning that they will beat OKC. You should hop on the bandwagon now so you can say “I told you so” when if they win the championship.

If you’ve refused to watch the Spurs in the past, have I swayed you? Will you give the Spurs a chance now? If you watch them play and don’t think they’re interesting, I’ll Paypal you $1. If you already care about the Spurs, tell five other people why. I have a hook up on some t-shirts and coffee mugs if you need added incentive.