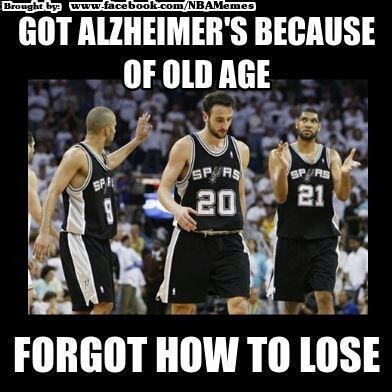 Time for a little honesty. I spent the holiday enjoying Orlando and turning down a timeshare salesman. I did not write my Tuesday post before Game 1 of the San Antonio Spurs and Oklahoma City Thunder series. Now that we all know the Spurs took Game 1, I’ll preview the rest of the series and breakdown the adjustments the Thunder needs to make to have a chance. Why believe me? I picked the Thunder in five…I’m a prediction machine. 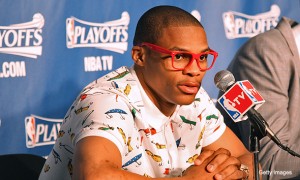 Backcourt – The point guards for both teams are the keys to each offense. Tony Parker (Bachelor of the Year) is playing great, and provides the balance for the Spurs’ three-point shooters and frontcourt attack. Russell Westbrook may be the second beat player on his team, but if he’s off, the Thunder will struggle because Kevin Durant can’t beat good teams alone. In Game 1, Parker was the better point guard and Westbrook was Westbrick; shooting inefficiently without the assists to offset his broken jumper. The Thunder definitely need Westbrook to get into the lane and knockdown the pull-up jumper that’s made him great so far in the playoffs.

Frontcourt – Kevin Durant pulled his weight, and that’s about all that went well for OKC. Tim Duncan and Tiago Splitter had productive games, which is a problem because the Thunder defensive front line must own the paint. Kendrick Perkins and Serge Ibaka have limited offensive games, so if they are taken advantage of on defense, the Thunder basically play 3 on 5. OKC has a great 3, but they can’t win without more support from their 7-footers.

See Also:  A Few Days Later: So About the Cornball Brother...

Bench – Top to bottom, San Antonio’s bench is better than Oklahoma City’s. While both teams have players you’d describe as “solid,” the Spurs bench has more players who are capable of a big game. How many people saw those Gary Neal shots going in? Also, the addition of Stephen Jackson midway through the season was a big pickup, and reminded several people that he is still in the league. Win/win!

The bench matchup really comes down to Manu Ginobili versus James Harden(‘s beard). A former 6th 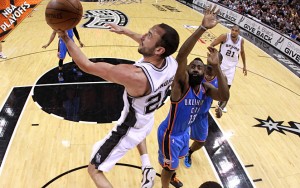 Man of the Year versus the reigning 6MOY. In Game 1, Ginobili played a much more complete game; sparking the Spurs in the second half. Harden has been up-and-down in the Playoffs this far. He has great and terrible performances which you expect from a bench player. If he can’t come up with four great performances in the next six games, the Thunder are done. Harden will at least have to outplay Ginobili every game to give his team a chance.

Coaching – Gregg Poppovich will wipe the floor with Scotty Brooks. End of analysis.

Intangibles – In a close Playoff game, you have to give the Spurs the edge in this category. The core of this team has four championships, and has seen (and overcome) it all over the past decade and change.

The Thunder have experience that is beyond their age, but they are still learning how to win at this level. If they keep the core together, they will win a ring or two. This year, I just don’t see it. I hope I’m wrong, but as we agreed earlier…I’m a prediction machine. Gift and a curse.

That said, it’s time to predict. I see the Spurs winning in five. OKC will win one at home, but the Spurs are too balanced to lose this series.

What do you say, SBM Sports Fans? Will OKC win Game 2 on Tuesday night and take home court advantage? Can they make the adjustments necessary to advance to the Finals? Or are the Spurs just too good right now? Hit the comments and let me know!

tags: basketball nba sports
previous The Twenty Step Guide to Drunk Texting
next The Residual Self Image and How “Ironically Ratchet” Became the New Thing