Hold Up! Could Boston Really Beat the Heat? 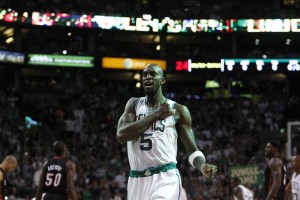 The Miami Heat were a wide open three pointer away from taking a dominating 3-1 series lead on the Boston Celtics. Instead, the Heat are headed home tied 2-2 and have lost all of their momentum. Could Boston really win this series? I think so. Here are a couple reasons to believe if you’re a Celtics fan:

Rajon Rondo is Magic Johnson – Not really, but he’s been amazing this series. Rondo, who led the league in assists this season, has continued his great passing and is the playoff leader in assists. But not even I, the Prediction Machine, could prophesy his rise in scoring. Rondo’s 44 points in Game 2 can’t be sustained, but it shows how great he can be if he develops more confidence in his jump shot. Miami has played 10 feet off of Rondo for most of this series. And if he keeps making his open shots, Boston will advance.

There’s also this, the greatest sideline interview in history. How has Boston exploited the Heat defense? By playing offense while they cry to the officials. #swag

The Celtics could be up 3-1 – Even the most passionate Celtics fan would admit that Boston was definitely the underdog heading into this series. After getting blown out in Game 1, a short series seemed inevitable.

Two overtime games later, Boston finds itself two games from the Finals behind Kevin Garnett’s HGH-aided rejuvenated play, and solid games from Keyon Dooling and Marquis Daniels. Besides that, Ray Allen remembered how to make jump shots. Honestly, I thought he was done after Game 1. He has already said he needs ankle surgery after the season. And he was so bad that Doc Rivers considered resting him for Game 2 (this is code for: “Ray Allen is old and broken, he pretty much sucks right now”). Instead, Ray Allen turned into Jesus Shuttlesworth. So yeah, there are a lot of “ifs” here, but the Celtics have gotten enough from these players to be up 3-1. With the series 2-2, why can’t they do it two more times and make the unlikely reality?

Before you label me a Heat Hater, here are a couple reasons not to panic if you’re a bandwagon Heat fan:

The Heat’s defense has been incredible…mostly – The Heat are built on lockdown defense. The problem is, they don’t play dominant D (lol) all the time. There are some strategic reasons why. For one, the Heat don’t have a big man that can contain KG down low or protect the paint like a Dwight Howard. Another reason is that defense is hard. You can’t expect a team to dominate defensively for 48 minutes and have high energy offense at the end of the game. When Miami’s defense is on, though, they make it almost impossible to score. The Heat have held Boston under 20 points in six quarters so far this series. If they play more of the defense that held Boston to 11 points in the first quarter of Game 1, they’ll move on to the Finals easily.

On top of this, no one in this round has lost at home (in the East and West). All Miami has to do is win their home games. Winning the series in seven means they can lose three times. No reason to panic yet.

The Heat have the two best players on the floor – No matter what happens, when LeBron James 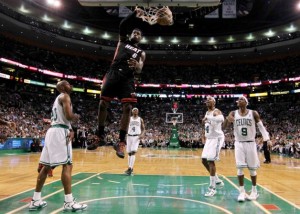 and Dwyane Wade are on the floor, they have the best players on the court. Watching this series makes one thing clear:

When LBJ and DWade are locked in, there is no defense to stop them.

Wade has been awful in the first half of a couple games so far, but that’s why he recruited LeBron to Miami. He doesn’t have to be great all game to hang with Boston. As long as Battier is being (effective yet) annoying, Mike Miller is hitting threes, and Chalmers continues playing well, Miami has the edge. It doesn’t matter if LeBron sucks in the fourth (he doesn’t). He and Wade give Miami a chance because they can go off at any time.

No one knows how this will play out. It’s why we watch basketball instead of Basketball Wives. There are no producer-created storylines or pretend arguments. Instead, we wonder if the refs will blow a call (likely), or if LeBron will hit the game winner (well…).

See Also:  Confessions of a Cerebral Dater: Learning to Trust Your Partner

Game 5 tonight will most likely decide who represents the East in the Finals next week. You’ve read my analysis, and it comes down to one simple question…

previous Christianity and Islam in Separation of Church and State
next Fail Blog: When Sexting Goes Wrong