Last week, Dr. J wrote a thoughtful piece called Five Ways Men Contribute to Female Insecurity. I agreed with most, if not all, of the points made but two points caused me a little heartburn: 1) Men entertain themselves with an image of women that doesn’t reflect reality and 2) Men rarely leave women with a reason for why things didn’t work out. If you’ll indulge me, today I’d like to delve into these two specific topics a bit further to better understand men’s obligations and how our insensitivity might contribute to women’s insecurity.

Men entertain themselves with an image of women that doesn’t reflect reality.

My first response: And, so what?

I’ll be honest, I don’t understand the unspoken competition women have among one another. I was discussing this particular topic further on Twitter. I wanted to understand why it was such a big deal that I, as a man, might find another woman attractive – whether she looks like my significant other or not.

I think most men know the women in the magazines, videos, and movies don’t look like that in real life. They definitely don’t look like that on a daily basis. However, unless I’m mistaken, I don’t think that’s the expectation of most men. I also don’t think most men care one way or the other. Those women are visually pleasing for that brief moment in time. No more, no less. There are two words for this: lust and fantasy.

See Also:  The Curse of The Good Black Man

It seems weird that I should be held accountable for tarnishing the self-esteem of another person when the term begins with “self.” When I make a passing comment about an attractive woman, that’s all it is, a passing comment. I’m not suggesting you look like her, that she looks better or you look worse, or that you should strive to look any more or less like her in the future. It’s not a competition.

There is absolutely no need to feel threatened by an offhand comment made about a woman I’m not with, while ignoring all the positive comments I’ve made about the woman I am with, you. Further, how can the fact that I’m with you count for nothing, yet my brief superficial attraction to a woman I’m not with hold greater importance? Doesn’t the fact that I’m with you speak to the fact that I want to be with you and not her? Or, am I only allowed to find women who look exactly like you attractive? Taking it a step further, upon commitment, are men agreeing to only ever find you attractive in the future?

Men rarely leave women with a reason for why things didn’t work out.

I’ve written about the five ways a man can break-up with women before, but I don’t understand this expectation of break-up etiquette everyone preaches and  not as many people practice. It’s a break-up. How much expectation for closure can you possibly have and why do you feel the other party owes you something other than a timely notification that the relationship is ending before they move on to someone else? In my opinion, that’s all anyone “owes” you. Further, unless you want to make the relationship work, then what can they possibly say to you that will make things better? I think people are confusing closure with resolution and they are not one in the same.

Take for example this Girls show on HBO some women talked me into watching recently (Ok, I will admit it is a fairly decent show.). In one episode, the girl breaks up with her long-time boyfriend because she’s bored with him. When she runs into him a couple weeks later, on purpose I might add, she gets upset because he’s already dating someone else. Excuse me, WHAT?! 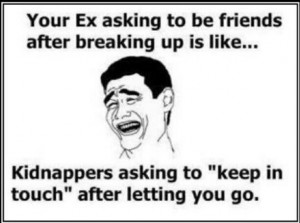 If you and I are broken up, what I do and whom I do it with is none of your business nor is the speed in which I do either of those any of your concern. We are broken up. By the very nature of breaking-up we have no further obligations to one another.

I’m actually not a big believer in telling someone the specific reasons I’m breaking up with them, unless I want the relationship to work, which if I’m breaking up with you, I likely do not or I believe it’s something you can’t, won’t, or shouldn’t change about yourself. Maybe it really is me, not you.

Besides, it’s not in our nature to take criticisms without rebuttal. If you or I have already decided that the relationship is broken beyond repair, then what is the point of discussing what we already know? You and I aren’t meant to be together. What more is there to talk about? At best, you or I might be able to convey something that will make one of us a better person for the next significant other but that would imply they are looking for the same intangible qualities as you, which they may or may not. Therefore, unless it’s something one can fix and permanently resolve, I really don’t see the point in talking about it. I view the termination of a relationship as only indicating that you and I aren’t mean to be. In my mind, it has little or no bearing on if I and every other woman on Earth are not meant to be.

What are men doing wrong that negatively impacts the average woman’s self esteem? How can men better account for their part in (knowingly or unknowingly) attributing to the lowering of women’s self esteem?