Home Featured Does the Hatred of the Miami Heat Represent a Generational Debate?
Featured
Sports and Entertainment
June 12, 2012 Joe Sargent 77

Does the Hatred of the Miami Heat Represent a Generational Debate?

I spent this weekend at my alma mater enjoying reunion and taking a big step in my life. When my Dad called to talk about it, we eventually did what we always do: talk about NBA basketball (sorry Rayna!).

My Dad is an outspoken supporter of the Miami Heat. Since The Decision and subsequent pep rally annoyed the hell out of me, I’m not a fan. We have talked about this a few times over the past two NBA seasons, but our conversation that afternoon struck a chord with me. Is this year’s NBA Finals a generational debate? Here are both sides of the argument: 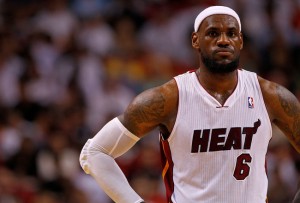 To my Dad and his generational peers, The Decision captured the spirit of the Civil Rights struggle. He’s had several conversations with his friends about the good in an NBA player exercising his right to choose. Believe me, I’ve heard about them all. To them, LeBron represents the players (80% Black) taking a stand against the owners (96% White). They see the media backlash/talking-head criticism (ahem, Skip Bayless)/trolling/memes aimed at LeBron as the product of an ingrained belief by many that the players should fall in line and do what’s best for the metaphorical team, even at the expense of his own happiness.

My Dad respects the strength LeBron showed in upsetting the status quo. As a man discriminated against, both outright and subtle throughout much of his early life, my Dad hopes LeBron does win championships. And not 1, not 2, not 3…you know what I mean. Can my generation of NBA fans understand this feeling without having experienced what our parents and grandparents did?

Young Guy’s Take: When You Talk Trash, Own it and Back it Up! –

For me, LeBron’s Decision/Pep Rally made him easy to root against. First, choosing to leave your hometown team on national TV seemed like a public breakup of high school sweethearts. It was gut wrenching to watch, and implied an air of self-entitlement and lack of self-awareness.

Participating in a nationally televised pep rally the next day only heightened this image of LeBron as the ultimate WWE villain. Without the context of Civil Rights, it looked like LeBron was so desperate to win he deferred to Dwyane Wade in an effort to lay out the easiest path possible to a title. To me, LeBron was trying to manufacture a legacy for himself. As a sports fan, I root for underdogs and pure greatness (…and the Pistons). The Decision felt like a catered dinner on Thanksgiving. It checks the boxes of what is “great,” but lacks the authenticity that makes it unique. What’s the fun in rooting for an outcome that seems orchestrated by conspiracy?

See Also:  SBM Sports: Reigning in the wildest storylines from Week One in the NFL

I don’t hate LeBron or the Heat, I just don’t think they are fun to root for. My Dad has a sense of pride in this team because they are playing on their own terms. I see it differently. Where do you stand? Wouldn’t you want support if you tried to succeed your way despite those saying “but we have always done it differently?” Those are the people we support in all other walks of life. What’s different about LeBron?

For what it’s worth, I think the Thunder will win in seven. They are just as talented as the Heat, except they have a substantial homecourt advantage. If the Heat win, I will applaud their triumph with a new perspective thanks to my Dad.

previous Relationships: Where Female Insecurity and Male Insensitivity Collide
next How to Dress Fresh For the Workplace