Home Featured To Be Young, Black, and Inspired
Featured
June 25, 2012 The Mighty Most 48

To Be Young, Black, and Inspired

Lately, I’ve been having a great many conversations around success – what it looks like, how it is defined and most importantly, what separates those who achieve it from those who don’t. More often than not in these conversations, success comes back to talent. Most folks feel like it is the talent – the God-given ability and blessings of some people that is at the foundation of their success. Their talent is what separates them. One of the things I love most about my life is that somehow, I’ve been blessed to be constantly surrounded by people of color who are supremely talented. And as I’ve interacted with these folks, one of the things I’ve come to understand is that talent is not as rare as talented people would like you to believe. Most people are blessed with a particular ability that iterates itself in unique ways – ways that separate each individual person on this Earth from everyone else. That’s the beauty of humanity. But if almost everyone is talented, why are some folks so much more successful than others?

I have a friend. This friend is by far, one of the most talented people I’ve ever met in my life. He can sing, he can dance, he can draw, he can write, he’s super fashionable, super funny, smart enough to be a lifelong academic but attractive enough to model clothes for a living. This friend however, has never been able to apply any of his talents in a meaningful, impacting way. He just hops from circle to circle, impressing folks unacquainted with him and his all-around awesomeness only to disappear before they discover that his talent is where he begins and ends. For him, talent is a burden and because it chose him so bountifully it defines him to people before he ever has the opportunity to define himself. In that way, he is held captive by his talent. His talent stands on his shoulders, announcing his arrival long before he ever actually arrives and that creates a fear in him – a fear that, no matter how wonderful he really is, he will always be a disappointment. In many ways he’s become a perpetually rolling stone, gathering no moss and leaving little impact. 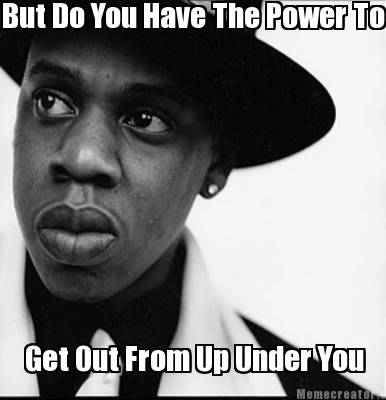 “By the way – I just quit my job,” read a text message I got last week. It came from another friend, one with whom I’ve spent a ton time sitting around discussing what it would be like to pursue our dreams. Most recently we had one of those discussions a month ago as we played basketball at the local Y. That day he shared with me an idea he’d had – one we both knew was golden. We both came out of college around the same time, we both dove head first into careers at Wall Street firms, we both found some early success and after about five years – we both realized that what we were doing was not what we wanted to be doing. But the thing about Wall St., and most jobs in corporate America, the thing no one ever tells you is that once you’re in, it becomes nearly impossible to get out. You make decent money – not enough to be rich by the standard of your peers, but enough to create an awesome little life for yourself. And it is not until the chains are tightly shackled around your ankles and wrists that you realize that this life you’ve created is now holding you captive. You’re afraid to leave because to do so is to strike out into uncharted waters. I’m excited that my homey finally broke free of those chains and I have no doubt that he will find a level of success he never knew attainable.

So this begs the question – what separates my two friends? What keeps one stuck in a sick cycle of purposeful avoidance and detachment while the other attaches himself to the pursuit of a dream? What is it that forces one to be defined by his fears while the other is striking out in spite of them? The answer is inspiration. One is inspired and the other is not. My one friend has been looking over his shoulder, running from his talent for so long that he can’t see the inspiration right in front of him. My other friend found his inspiration in an idea he couldn’t shake. What I’ve learned from them, and from so many other people I’ve come to know is that no matter how talented we are, no matter how great our work ethic and no matter how much we want to be something – we are nothing without inspiration. I can’t tell you how you go about finding your inspiration. That journey is yours. But what I can tell you – with absolute certainty – is that you can only go but so far, achieve but so much, when you’re living a life void of inspiration.

So what does this have to do with SBM … and what does this have to do with you? Well, if you’ve been visiting the site for awhile, you’ll notice some things are different around here. Actually, if you’ve been visiting for a long while you’ll notice that there’s been a whole lot of changes over the past few months. We’re posting more frequently throughout the day, we have more writers on staff, we’re covering different topics and most recently, we’ve updated the site’s aesthetics here and on Twitter and Facebook. We’ve done this because we are inspired. We realize that our greatest contributions to the world won’t come from sitting around working for other people. We realize that being citizens of this world, more specifically, being black men in the United States of America means that we have a responsibility to pursue inspiration and to identify, refine, and share our talents with the world, for our people. You too have that responsibility. If you’re spending half your day at work daydreaming about something you’d rather be doing – you have a responsibility to seek out the inspiration needed to overcome your fear and go do that thing. And if you’ve already found your inspiration, if you’re already doing what you believe you’ve been put on Earth to do, then your responsibility is to be great. Because to be young, black and inspired is to believe in your ability to create the world you see in your mind.

See Also:  Rantings of An SBM

Till next time … stay low and keep firing.

tags: Black Excellence Progress SBM Updates
previous Men Are Not Perfect Vol 1: Are Men Less Moral than Women?
next A Look Back at the 2012 NBA Season