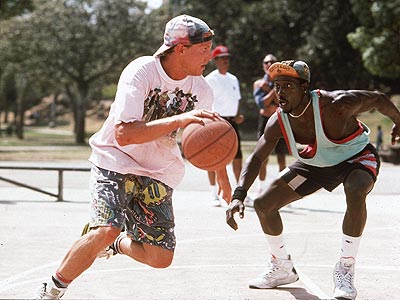 In case it wasn’t clear by my last few posts: I love basketball. I love it so much that I’m possessive about it. I get upset when someone plays it without respecting its beauty. Since we are still too far away from the NFL season to delve into it, I want to talk about four of the world’s worst people to run across when playing pickup basketball.

John Q. Hustle: This is the guy who realizes he sucks, but has convinced himself that good ole-fashioned grit and determination can replace skill and actual talent.

Newsflash: It doesn’t. And you look pretty ri-damn-diculous while we’re at it.

This is a guy who plays like a less skilled Tyler Hansbrough. While you may not think that is possible, I’m here to tell you it is. Classic symptoms of JQH are loud grunts, lots of picks, and no shots taken outside of 9 feet. The issue with JQH is that he makes any game longer, more frustrating, and lower-scoring. Yes, that also equals less fun. I hate you, John Q. Hustle. Learn how to shoot a jump shot. 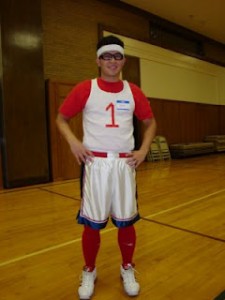 The name for this guy actually comes from someone who convinced dozens of people a major university to call him “Ivo.” he dressed like he could have hopped out of the stands during Game 7 of the NBA Finals and joined in. But his game reminded me of the real Allen Iverson…at 58 years old…on bath salts…playing blindfolded.

If you see someone dressed like an NBA player, assume that he sucks. I hate you, AI 2.0. “Dressing for the job you want” does NOT include NBA player. You just suck.

The Former Football Player: “Retired” football players should be fun in pickup basketball. They are in shape, coordinated, and usually have played basketball in the past.

The problem is, their football background makes them magnets for contact. I swear, former football players have flashbacks to the gridiron like WWII veterans. They just like to hit/grab/bang/chop/hack/bump anyone in their way (pause?). I can’t stand playing these guys because I’m not playing for a championship ring. I don’t feel like being fouled every time I shoot the ball. It’s not that serious. In fact, it’s nowhere near that serious. Ever. At all. I hate you, Former Football Player.

“Do You Know Who I Am?” Guy: Probably worst of all is DYKWIAGuy. This is the player at your local court who received a D1 scholarship or played some level of professional ball in the past.

As good as this guy is, he usually adds nothing to a game because he’s convinced himself he’s too good for it. He’ll spend his time shooting 30 footers or dribbling 72 times before doing anything. Try to set a screen for him? He’ll wave you away. Call for a pass? LOL. Your best bet is to try and grab a rebound.

See Also:  4 Sports Podcasts to Get You to Football Season

DYKWIAGuy is the worst person to play with because you’ll wait for 90 minutes to play, then have your game decided by a stranger who tries to win by playing 1 on 5. First of all, DYKWIAGuy, if you were that good you wouldn’t be playing pickup ball with me. You’d be at Madison Square Garden. Secondly, I hate you.

Well this post made me upset. I’m now typing with clenched fists somehow and I just punched a kitten. The summer usually brings out these (and more) terrible people. Hopefully you can pick these guys out and avoid them.

Can you top these YMCA-pariahs? Who else have you run into at your local court? If you don’t recognize these guys, then you ARE one of them. Please never play basketball again.

tags: basketball pickup game sports
previous Men Are Not Perfect Vol 2: Everything I Need to Know About Love
next Get Your Hands Out Of My Pockets: The Debate On Borrowing Money In Relationships