Home Featured Get Your Hands Out Of My Pockets: The Debate On Borrowing Money In Relationships
Featured
Relationships
Single Black Mail
July 5, 2012 Jeff J. 43

Get Your Hands Out Of My Pockets: The Debate On Borrowing Money In Relationships 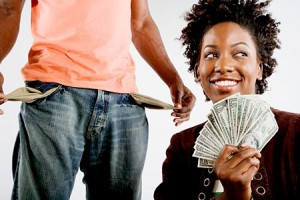 Hi-  I need the male perspective on a topic- Men who borrow money from their girlfriends, what feedback you can provide on that situation? I’ve noticed it being a habit with my man- and as financially stable as I am, it definitely does not hurt my pocket and he always pays me back, on time. I guess i’m lowkey bothered by it because ‘aint a man suppose to support a woman!??!’ by no means do I want him to pay all my bills and living expenses, but I guess if a situation were to arise where I can’t fend for my own financial burdens, I’d like the comfort of knowing my man’s got me- but if im noticing a pattern that he comes to me when his checkbook doesn’t align, then who am I suppose to turn to when and if my time comes?

Good Morning dear reader. I understand your dilemma, and will try to shed light on this topic from a man’s perspective. They say money is the root of all evil. I think that’s BS. When I was taking my driver’s ed courses, my instructor told us on day 1 that a car was an asset but also a deadly weapon, if used incorrectly. I feel the same way about money. The evil isn’t in the resource, but in the intentions of the one who uses the resource. There are a few points with your email I wanted to address to provide clarity to your situation:

Knowing your significant other before you make it official
When we first meet people who we might consider “exclusive dating material,” we will judge them. We should scrutinize their actions, and compare their behaviour against our personal preferences  to determine whether that person will be worth the trouble of dating. You may notice things about them that will raise a red flag. I would think that a woman would pay close attention to a man’s financial stability and fiscal responsibility if she wanted him as “hers.” This isn’t an indictment on women as gold diggers, but a commendation of their perceptive nature. If you deal with a man who has money for the latest copy of NBA2K13 on XBOX, wears the trendiest clothes, but yet has no money to pay his personal bills, chances are he is fiscally irresponsible. Women don’t want a man who can’t handle his own, because they won’t be able to handle bigger issues as they arise. Did your man exhibit these characteristics before he was your boyfriend? Did he pay for dates or were you always the one paying the bill? If you had a certain criteria for the financial standing of a significant other, and this man didn’t meet those requirements, then the blame is squarely on your shoulders for allowing the relationship to go any further than casual dating.

See Also:  Why Are White People So Happy?

“‘Aint a man suppose to support a woman?!”
See…this is where I have an issue with women at times. This line of thinking directly links to my previous point on boyfriend pre-screening. Men and women love to decide when gender norms apply, and this usually happens when it’s in our best interest. You say in the paragraph that you are financially stable, and that loaning your boyfriend the money doesn’t really hurt your bottom line, yet you still have this gender specification looming in the back of your mind. You aren’t wrong for it. I feel the same way most of the time! However, I do think it’s circumstantial and situational. I’m not one of those dudes who would lose 75% of my testosterone if my girlfriend made more money than me. It would motivate me to do the best I could to be the most financially stable I could become. It makes the situation a tad confusing when you want to herald your individual financial accomplishments, while chiding your man’s potential to support you.

Can you see how that can be contradictory? I know that you’re not looking for your boyfriend to pay your bills, and that you would want the peace of mind to know that if you were in a financial jam, that he would hold you down. I would concur with your concerns, if he didn’t pay you back. You said he does pay you back. Trust me when I say loaning money to family and friends is one of the worst actions ever invented in life! If and when they don’t pay you back, it can be a huge issue. He pays his debts, and I can respect that. If he pays his debts, that shows to me that he does have financial responsibility, and that can translate to financial support. 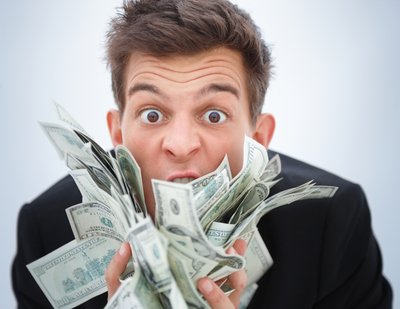 A man’s pride and a woman’s money
Men are the most prideful of the 2 genders by a long shot. Due to the gender roles society currently places on us, men are usually expected to be the breadwinners. The head of the household. The financial backbone of the family structure. So, when men can’t live up to those financial responsibilities for whatever reason, we can feel “less than” and shamed. It’s not easy to ask for money, but a good dude who knows he needs it will do what he has to do to get it, and pay his debts. Assuming your dude is a good dude, he probably feels comfortable enough with you to ask you for this money. I don’t know his financial situation, but if he gets this money from you and pays it back, the only issue I would have is if you are lending him money you don’t have to spare. That’s one way this arrangement can be troublesome. You have to know what you can give and what you can’t, and if you have to say no, he shouldn’t look at you any differently, and should respect you for your decision, especially if you have helped him out before!

There is the other side to the coin. If he is constantly asking you for money, he might be using you. Has he always asked you for money? What are his reasons for needing these temporary loans? Are other areas of your relationship lacking, or do they feel “fake” to you? You have to be careful of someone who wants you only for your assets and not for your total endearing qualities, and I can’t rule out this possibility, being 100% real with you.

See Also:  You Don’t Even Know That You Are Winning: Are You Getting In Your Own Way?

I don’t have an issue with lending money or borrowing money from a girlfriend. No man should really feel that way either. A relationship is a two-way street, and the same way a woman can hold you down financially, you better be ready to do the same. It’s only right! This goes for other areas of the relationship as well. That’s why they call it a relationship, right? It isn’t always quid pro quo, but knowing that you have a support system free of shame or ridicule is a beautiful thing.

Just make sure you research this borrowing and if it becomes a pattern, you have a duty to yourself to make sure you aren’t just a pretty looking human ATM.

Men: how do you feel about borrowing money from a girlfriend?

Women: Where is the fine line between independence with money and dependence on men? When is it right and wrong to lend your man money?

tags: money
previous 4 People Who Should Never Play Pickup Ball Again
next Chicago: A City On The Brink