I was finally convinced into taking my first trek to Essence Music Festival. I had my doubts, but it turned out to be a great experience. One that I recommend all of our readers participate in at least once in their lifetime. In addition to the video above, I wanted to provide a more detailed breakdown of recommendations. If you attended Essence Music Festival 2012 or another year, please share your thoughts and suggestions (or concerns) in the comment section below.

Let’s start with the basics. I didn’t have a piece of bad food the entire time I was in New Orleans. Although it was recommended I attend a list of restaurants that I would have never had time to visit, I only feel comfortable recommending those I can personally attest to. Those include:

Breakfast: The Ruby Slipper Café: Trust me, great food all around! I was with a large party and I didn’t hear anyone complaining. However, I personally recommend the barbecue shrimp grits or three-pig omelet. They also have fried green tomatoes and the crab cakes I sampled were good as well.

Lunch: Daisy Dukes: ORDER THE CATFISH POBOY! Enough said. If you don’t like catfish… Well, get away from me, Judas!

Dinner: Coop’s Place: I’ve never had red fish before, but I have had good food before and their cajun seasoned red fish might have been the best piece of food I’ve had in, wait for it, MY ENTIRE LIFE! It packs a kick though, so make sure you order water. The fried chicken was delicious also. I know it’s a stereotype but I don’t care. Delicious is delicious.

See Also:  Recapping Single Sam: A Few Random Thoughts I Had Along The Way 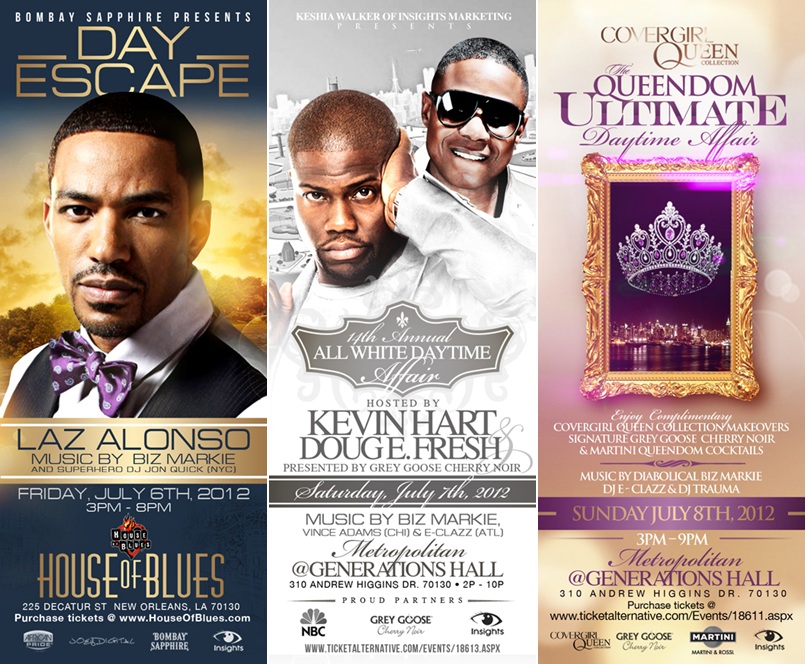 Day Parties: I only made it to one of the parties shown above, The 15th Annual White Party, but I heard the House of Blues party was jumping, too. Basically, I didn’t hear about a dull party the entire time I was in New Orleans, so I’m pretty sure you can’t go wrong. Also, the Metropolitan at Generations Hall was a huge venue. If the main stage and dance floor area overwhelms you, then I recommend heading to the back of the club (the restroom area) where there is another club/dance floor. If crowds aren’t your thing, there are also VIP tables for sale on the second level. Buy the VIP tables early! They will sell out.

Night Parties: When in doubt, head to Bourbon Street and look for the club playing music you want to hear with people the age you want to congregate with. I literally saw folks ages 16 – 66 shaking what their mothers gave them. If you seek, you shall find.

However, if you want something specific and don’t want to walk the crowded streets shown in the video, I would recommend Harrah’s Casino, which has a club inside (with cover charge). While I never personally attended, I also heard there was a nice (and free) lounge inside the W Hotel across the street from Harrah’s.

Listen, my people, get everywhere early or expect to wait in line. This includes clubs and diners. It was rare I walked straight into anywhere, but in fairness, everywhere I walked into was worth the wait.

Don’t bother with the rental car. Unless you plan to explore the entire city of New Orleans, dedicate the majority of your money to obtaining nice housing in or near the French Quarter. You don’t need a rental car. The taxi cab rates are fair and reasonable. You’ll likely end up paying the same amount in parking, valet fees, or if you park in the wrong place, towing. I can personally attest that you can walk the entire French Quarter in a matter of hours. I know, because I did it while on a really specific quest for one really specific snack. That’s a long story that I’ll cover some other day. All the major parties I attended were in this general vicinity, so unless you want to spend time stuck in traffic or trying to figure out where you’re going to park, don’t bother with a rental car. Staying downtown and walking or cabing it is your best bet. To give you an idea of costs, from downtown to the airport is only $33. If you can’t afford to spare (or split) $33, you should probably stay home anyway.

See Also:  If I Was Elected President: Eight Things America Needs From Its POTUS

Did you make it to Essence Musical Festival 2012 or a prior year? Any thoughts or tips? In general, are there any restaurants, night clubs, or sights and sounds you would recommend our readers check out during their visit to New Orleans?