Home Featured Out in the Open: A New Understanding of Frank Ocean’s Novacane
Featured
July 12, 2012 The Mighty Most 26

Out in the Open: A New Understanding of Frank Ocean’s Novacane

I remember clearly the day I first heard Frank Ocean’s Novacane. It was the earlier part of last year, on an unseasonably warm March day. I remember the day specifically because I couldn’t help but drop the windows in the car; partly because of the weather and partly because of this weirdly infectious groove streaming through my radio. It sounded both new and vintage at the same time. And like anything new and dope on the radio in New York, the DJ, Mister Cee, was hypin the hell out of out it. He’d let the first verse and the chorus play out only to stop the record, announce the arrival of this Frank Ocean character and start the joint again from the top. I was intrigued and apparently, so too was the rest the city and country as Novacane and the mixtape that birthed it Nostalgia Ultra rapidly grew in popularity over the next few months.

Fast forward to November 26th. Frank has re-released Nostalgia to critical acclaim, stole the show on The Throne’s Watch The Throne and was sitting uncomfortably at the forefront of an unexpected Indie R&B explosion. The Bowery Ballroom is packed with an interesting mix of industry folk, pseudo-industry folk, music connoisseurs and people who just want to say they were there. I’m upstairs standing next to the NPR’s Frannie Kelley, who’d been listening to Frank for about as long as I had. And though we were both excited, as were most of the folks in the room, I was still a little nervous – unsure of how Ocean’s sometimes awkward vocals might resonate live. Frank delivered spectacularly. At times brooding, at times pensive – always shy, yet always open, Frank’s stage presence was myopically introspective. Much like in lyric, on stage, he bore himself open in a way that allowed us to look straight at his soul without ever actually seeing it.

The crowd zoned out as he breezed through selected cuts from Nostalgia, a semi-freestyled version of No Church in the Wild, and a couple then new numbers that now appear on his debut album Channel Orange. As he grew nearer to the end of his set, you could feel the anticipation grow for what was his biggest hit to date. And as the the crowd’s anticipation was greeted by the first few bars of the Tricky Stewart produced Novacane, I swore I saw a slight frown, or some sort of annoyed smirk creep onto his face. “I think I started something…” he sang, his shoulders swaying lazily as if he was shrugging off the song. “I got what I wanted … “ I knew my eyes weren’t deceiving me when Frannie leaned over and said “I love how indifferent he is toward Novacane.” We both seemed to make the obvious music snob assumption that his demeanor change and seeming ambivalence toward the song was due to its popularity; it seemed like he’d grown tired of it, tired of people liking it.

See Also:  The Time Was Illmatic: An Interview With The Director And Producer Of "Time Is Illmatic"

A week and a half ago, rumors began running through the Internet. Folks who had the opportunity to listen to Channel Orange early talked about a love song, one where the object of Frank’s affection was described using male pronouns. Two days later he released what were to be the liner notes of his then forthcoming album. In them he revealed to the world that his first love was a man. Frank came out, not out of the closet, but out of his closet. Out of whatever place he’d been in that prevented him from letting the world know who he was, and how he’d loved. The internet went crazy, his coming out became headline news on major publications and websites and the twitter-verse had him trending for a full twenty-four hours. By and large, the reactions I noted were generally positive or indifferent though many made the mistake of attaching a particular sexuality to his coming out – which Frank actually stopped well short of … (con’t to next page …) 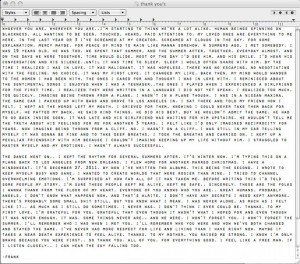 Five days later with the buzz for his album feverish, Frank Ocean performed for the first time on live television on Jimmy Fallon’s late night show. Backed by The Roots, and with the wonderful touch of a string section, Frank sang his song of unrequited love, the same song at the heart of the initial rumors: Bad Religion.

My thought about Frank Ocean Novacane

With all the discussion of Frank, and after listening to his album, I couldn’t help but dust off my copy of Nostalgia Ultra, and swing back through some of my favorite Frank Ocean joints. As I listened to Novacane I heard the song differently. Previously, I’d taken the song at face value and assumed it was about a supremely built-Z-Trip-listening-dental-student-porn star with a novacaine stash who put it on Frank so awesomely that it rendered him incapable of achieving satisfaction with anyone else. But with lyrics like:

I think I started something. Got what I wanted, didn’t I. I can’t feel nothing, super human – even when I’m f*cking, Viagra popping, every single record, auto-tuning, muted emotion … pitch corrected, computed emotion.

It’s hard not to wonder whether Frank’s muted emotion, his inability to feel, and his inability to arouse himself unassisted, was somehow instead related to his unrequited love for a man. With this new understanding of Frank, it’s hard to tell whether it’s her attractiveness that has Frank sprung, or whether the numbed pain has created a previously non-existent space for him to experience something that he had not before. And as I think back to the first time I heard the song, I wonder too if Mister Cee heard something in it imperceptible to my deafly heteronormative ears as he was fighting off questions about sexuality around the time he debuted the song on New York radio. And as I think back to the annoyance I perceived in Ocean’s body language the first time I saw him perform Novacane live, I wonder if he really was ambivalent toward its popularity, or if he was just upset that no one actually got it.

It’s completely possible that I’m looking at this too deeply, or listening too closely. Novacane could be exactly what we all always thought it was – a simple, mid-tempo drug ballad about a fling with a beautiful woman. But with this new knowledge of Frank and his multi-layered life, it’s also completely possible that he’s been trying to tell us who he was since his very first single, and that last Wednesday, he just decided to put it in words simple enough for us to understand. He is loved and he has loved and in that way, he’s no different than most of us.

I have no great proclamations to make about what his coming out means for his success or for tolerance in Hip-Hop. All I really care about is the music. Some of the world’s most resonant and affecting art has been created at the hands of tortured souls – people who’ve had to internalize their pain and only have the opportunity to give us glimpses of it through what they produce. Frank Ocean’s art was clearly weighted and flavored by the burden of his once unspeakable truth. It’s why Nostalgia and Novacane are more than just a mixtape and single. The selfish part of me wonders whether Frank’s revelation will somehow lighten the heft of his music, or whether the freedom he might now feel will push his art to heights previously unreachable. Either way, it’s a beautiful thing to see people decide to present themselves to the world fully and wholly.

Every book in here I wrote. Some I’m not too proud of, some I wish I could burn. So many pages I wrote, wish I could revise ’em. But there’s no erasing and the best advice I got was keep writing, and keep living, and keep loving. And when the ink dries, and the pages turn to do dust- so will we. Check out some more from me here.

tags: Coming Out coming out the closet Frank Ocean Frank Ocean Comes Out music Theory
previous Why Black Men Take Longer to Get Married
next 10 Signs You’re Too Old for The Club