Home Featured Urban Life: Immune to the City. Nothing Can Phase Me.
Featured
July 17, 2012 Tunde 57

Urban Life: Immune to the City. Nothing Can Phase Me. 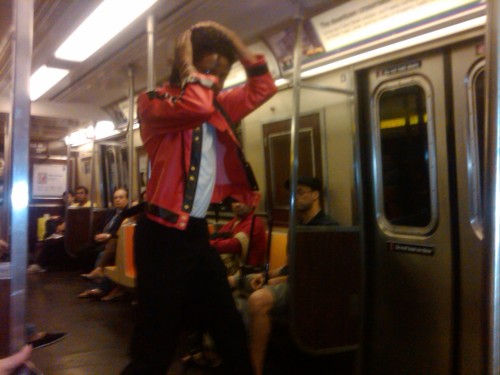 “You haven’t grown accustomed to New York until you can see the illest sh*t ever and it doesn’t phase you.”

I forgot who gave me this advice when I first moved to New York eleven months ago, but I surely didn’t believe it. There was no way a person could see some of the things I saw while riding the train and not look in awe. There were too many inconceivable occurrences. The panhandlers, the banjo-playing Mexican cowboy, and the preachers who told the whole car we were going to burn in hell. I even went on to start a tumblr page documenting my experiences while commuting around the city.

Then a funny thing happened. I started to find things normal that to a person who didn’t live here would be downright shocking. The pushing and the being in a hurry to go nowhere became a part of my everyday routine. I learned to bring headphones and a good selection of music where I went. And while commuting to work, I brought a book to distract myself from whatever was going on around me.

It all came to a head this past Saturday as I was leaving my lab and going to my basketball game in Brooklyn. My game was at Rodney Park off Marcy Ave, so to get there I had to take the J train. As I stepped off one train and walked down some steps so I could transfer to the J, I noticed a young white woman leaning against the wall. She was dressed in a black tank top and black shorts. One of the first things I noticed about her was that she was holding half a six-pack of Rolling Rock. Before I got within 20 yards of her, I could tell and smell that she had drank the the three missing beers and some hard liquor.

As I moved closer and took in more of her appearance, I noticed that she didn’t have any shoes on. Knowing how dirty the subway system is here, I shuddered at the thought of her walking around barefoot and what type of germs were now making her feet their home. As I passed her, I glanced at her face and her eyes were closed, but she had a look of relief and joy. It’s a look I know too well. It’s the look on your face when you finally make it to a bathroom after holding your bladder for a long time. As I looked down, I saw a steady stream of urine flowing down her leg and leaving a puddle on the floor.

This chick was really leaning against a wall and peeing on herself. Maybe she was drunk but she couldn’t have been that intoxicated to still be holding onto her Rolling Rock with a death grip. The only conclusion I could muster was that she just didn’t care. As I passed her and looked back, she abruptly opened her eyes and looked at me with a smirk on her face. She knew exactly what she was doing. This whole interaction took place in no less than 20 seconds.

As I engrossed myself in the lyrics of Meek Mill and MMG, I kept walking and thought to myself, “damn I really am getting accustomed to New York. That sh*t didn’t even phase me.”

SBM Fam, are you in a city? If so, have you grown desensitized to the things that come with it? Do you have any stories of things you’ve seen that in the past would’ve phased, but today you just shrug it off?

tags: Random
previous Sports Fans: Are the Knicks Losing Their Hold of NYC?
next Joe Paterno, Penn State, and the Hypocrisy of the Stop Snitching Mentality