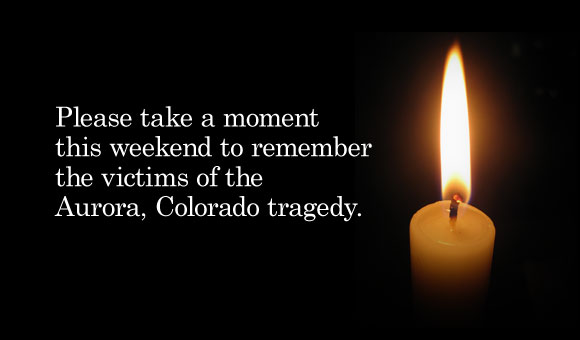 As many of you know, this past Friday, July 20, 2012 at around 12:30 a.m., an armed man entered a movie theatre in Aurora, Colorado during a midnight showing of The Dark Knight Rises and opened fire on innocent moviegoers. When the shooting stopped, over 50 people were wounded and 12 people died on the scene or as a direct result of their wounds at the hospitals they were taken to. Later, 24-year-old James E. Holmes would be identified as the shooter and taken into police custody. As a resident of Denver, Colorado, living less than 20 minutes from where the shooting took place in a theatre I’ve been to before, Slim Jackson, SBM Executive Editor, asked that I summarize my experience and thoughts on the shooting.

I’d been telling people since last year that I was going to see The Dark Knight Rises opening weekend, and I had Friday, July 20, 2012 off. However, I chose to sleep in that morning and catch the movie in the afternoon. I was abruptly woken up at 7:53 a.m. by the repeated calls of my father. I ignored them at first, figuring I could call him later in the day, but the incessant and constant vibration of my phone finally forced me out of bed.

“Hello?” It was more of a groggy-voiced accusation than a greeting.

“Ok. You’re sleep. I didn’t want to cause a panic but I thought I’d call to make sure. Yeah… I thought you were ok.” My father, who I’ve rarely, if ever, heard rattled, said in a relieved tone. “Ok… I’ll let you get back to sleep… I’ll let your mother know you’re ok.”

I was still reluctantly awakening from slumber and I was confused. “What are you talking about?”

“There was a shooting in Aurora. I’d gotten a couple calls from friends and family. They couldn’t get hold of you. Everyone just wanted to make sure you were ok.”

“Ok,” I said still confused. Shootings happen every day I thought to myself. What was so special about this one? “Yeah, I’m fine.”

“I’ll let everyone know. You should check out the news. Love you.”

I hung up the phone no less confused than when the conversation began. I was about to turn over and go back to bed when something caught my eye. I’m not an unpopular person, but I hadn’t seen this many missed calls and text messages in years. My inbox was littered with brief excerpts from friends and family, but what caught me off-guard was the number of contacts I hadn’t heard from in months, or in some cases years. The first message was from my mom at 5:15am, “Please let me know everything is ok” I began to respond to a few of the messages before I realized they all had a similar theme, “Are you ok?” This barrage of messages was similar to the ones I received when the wildfires from last month hit national airways. I decided I’d better check out the news…

That was the headline that greeted me on the homepage of the city’s largest paper, The DenverPost. I had completely underestimated the gravity of the situation. I moved over to the national networks for more information. They were all running the same story. Another massacre, like the High School shooting of Columbine, had happened in Colorado again. I was gripped by the same panic that I’m sure took hold of my friends and family as they sought out to contact me and instead of getting relief, they got unnerving silence as, unknown to them, I slept peacefully in my bed. I began to respond to the text messages and phone calls with more sympathy this time around, but I first had to confirm the people I knew in Colorado were ok. Fortunately, no one in my immediate contacts had attended the showing. Others were not so fortunate.

Wide-awake now, I began watching with the remainder of the country as the story unfolded on the national news networks. I briefly hopped on Twitter to see if and how others were affected, but I had to take a leave of absence soon thereafter when I noticed an ever-growing group of people were already turning the shooting into comedic fodder for the entertainment of their followers. Twelve people had died and many more were still laying in critical condition in hospitals around the city. The Internet on the other hand was already busy making jokes or so-called relative comparisons, “People die every day!” I saw commented more than once. True, but death tolls and mourning, as best I can tell, aren’t a competition. But, rather than pass judgment, I let the people who reached out to me know that I was ok – and I logged off.

See Also:  One of the Best Decisions of My Life

As the weekend went on, the portrait of the suspected shooter, 24-year-old James E. Holmes, began to emerge. As I was watching CNN Live at one point, I remember hearing the emotional voice of a man who had lost a co-worker to the shooting make a remark along the lines of, “Victims aren’t remembered in this country, killers are.” Sadly, he had a point. Already the major networks were slowly shifting their focus from those lost to the man who was charged with causing their death, Mr. James Holmes.

Over the course of the weekend, as more and more people became aware of the shooting I received more and more text messages, phone calls, and Twitter messages. I caught up with people I hadn’t heard from in months and likely won’t hear from again for many more months, until, perhaps, the next near-tragedy occurs. While I’m truly grateful (and underestimated) people were concerned with my well-being, I couldn’t help but wonder why it takes tragedies to unite us? Why do I only hear from people making sure my life wasn’t lost instead of checking up on me on all the days when my life was never in danger? Don’t get me wrong, I’m guilty of this ‘moral crime,’ too.

I was also asked by a number of people to provide my thoughts on the alleged shooter, James Holmes, gun laws, and an array of other topics related or unrelated to the shooting. However, I believe there is a time and a place for those discussions and we are not there, yet. In my opinion, those are discussions we should/could have at all times, not just when it’s convenient, at the expense of the victims, or because we’re reminded at the hands of a still unfolding tragedy. In the aftermath of it all, I’m sure there will be plenty of time for accusations, fingerpointing, grandstanding and partisanship. Instead, I want to end this post in remembrance of those lost, instead of focusing on the issues that are still present. Let us not quickly forget those who are no longer with us simply because they are not here to speak for themselves. The following are the names of the victims that have been released:

See Also:  Things Women Do That Men Will Never Understand

Click here to read CNN’s profile on Remembering the Victims. I’d also like to give my thoughts and prayers to the families and friends of those lost or still in recovery. I’d ask, in general, that we all take some time out today, tomorrow, and every day to appreciate those around us in the calmness of the present instead of only seeking them out in the chaos of tragedy. Let’s make an effort to give equal appreciation to life instead of waiting until death to mourn its loss. Lastly, on a personal note, I want to thank all those who reached out to check on me regardless of medium. Thank you.