Should Women Date Men Who Pay For Dates With Coupons? 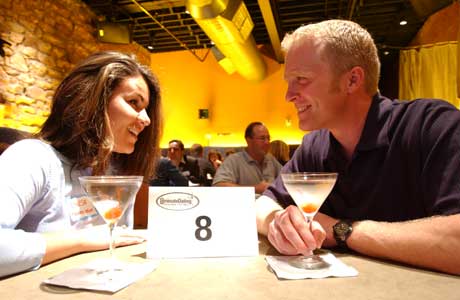 The social media landscape is full of people who never lose in their lives, are perfect 10s in looks, make millions of dollars, and live life to the fullest. At least this is the impression that most people give on Facebook and Twitter. In real life, they aren’t even close to the expectations and standards that they set in the virtual world. The advantage to watching the hypocrisy and judgment ensue is that they bring up excellent topics to discuss on SBM! So as I skimmed my timeline, I saw the discussion revolving around dating (as usual). Women seemed to be in an uproar over men who paid for dates with coupons. Some were appalled, while others didn’t have a problem. I saw men staying relatively silent on this topic, probably because sports or music was more prevalent that day. I decided to embrace this debate and blog out loud about the pros and cons of dating a man who pays for a date with a coupon.

I’ve said this ad nauseum in the 6+ years that I have blogged, but women don’t respect a man who doesn’t have a grasp on his finances. If you have made the proper connections in life, and done even minimalistic research into stores, products, and deals, then you should never pay for everything at full price. The benefit of an under performing national economy is that every business wants your patronage, and they are willing to sweeten deals. Look no further than to sites like LivingSocial and Groupon to see that companies want your money and have a plethora of deals to show you! I made  a vow that I didn’t want to pay for certain things at full price (or at all), so instead of becoming a stick up kid, I started using my resources. I do product reviews for companies, and I’m fortunate to work with people in different industries who can put me on to the best deal possible. Dinners and dates are no different. If restaurant week comes to NYC, be sure that I will take advantage and enjoy high quality meals and discount prices. To me, there is no shame in that. I do believe that a man should pay for the first date regardless of what a woman says. it’s just customary. If a woman is getting a free meal, I don’t see why it matters whether or not that meal is discounted. Women should salute a man for getting the most bang for their buck, because that means there’s more money left over to spend on nice things for the both of you (if you get that far with him).

Con – A Thin Line Between Frugal And Cheap

The flipside of finding a deal is the perception that you are cheap. There’s nothing wrong with getting a deal and flipping that into an awesome night for you and a lady friend, but when you don’t want to spend money without the benefit of a price break, you look suspect. I’m not one to be all up in another person’s bank account, but there is a time and place for everything. Men will spend money on electronics, clothes, cars, and anything else that interest them. When you hesitate to spend that same kind of money on a woman, they will notice and keep that in the back of their head. Women, well good women, will not hesitate to spend money on a man when they know that you will do the same for them. One would have to wonder if the cheapness a man exhibits correlates directly to the level of admiration they have for that woman. Now all cases are different, and money spent doesn’t always mean that you love a woman, but no one likes a cheap skate. It’s cool to splurge within reason.

Con – Perception Of The Coupon

Although I do agree that fiscal responsibility is an admirable trait that men can exhibit, I am a big proponent of tact. I don’t have a problem with paying for a date with a coupon, but I cant front as if I’ve ever done that before. Honestly, I don’t know how comfortable I would feel whipping out a “2 for 1 drinks Taco Tuesday” special coupon on a date without fear of judgment from a woman. Woman might see the coupon and be reminded of younger days when men they dated considered breakfast at IHOP as gourmet dining. They will tell you that coupon dinners are cool when it’s fast food or chain restaurant dining, but at a nicer establishment or a more formal sit-down dinner it’s out of line. They will feel like the dinner is sub par even if it’s the best meal they have ever eaten! I don’t look at this as logical, but these are real feelings from women and real apprehension from men. If I paid for a meal via coupon, the woman would never know because I would utilize tact. There’s no need for them to know that I got a discount. I’d rather avoid the potential judgment and side eyes by taking care of those minute details in the shadows.

See Also:  Never Too Much

Pro – The Experience > The Cost Of The Meal

On the same note, you can pay for a meal via some type of discount special, and still retain the ambiance of a high quality meal. There’s no need to swindle a woman into thinking that you are a baller when your bank account is regular. A woman will eventually find out what type of dough you actually hold. However, you can have her focus on the experience itself, and not the price point. Some of the nicest restaurants in the US are more than affordable, but have an air of premium dining about them. The experience of a quality date is greater than the price, and it doesn’t hurt that a man can save an extra buck or 20. While I’m on the subject of coupon dates, what’s the difference between a coupon and a hookup by the establishment? If I had a coupon for a free meal at a five star restaurant where we would eat for free, and I knew the owner of a restaurant who allowed me to eat on their dime, is the difference only semantics?

In the end, I don’t think it’s wrong for a man to pay for a date with a coupon, especially if he is paying for the entire date! I would just caution against the tact used in applying that coupon on a date. No matter how much a woman would say that it was cool, I would have a feeling that some type of clowning would ensue either their, down the line, or to her homegirls. You don’t want to damage your brand, but you don’t want to front either. It’s a slippery slope. Women, if you have a good guy treating you right, or a potential good dude who wants to spend time with you and treat you to dates, don’t judge him on how he gets it done. Focus on the experience itself. Some of the same people creating these standards of dating are the same ones who spend Friday night curled up with their laptops and copies of 50 Shades of Grey, listening to the latest Adele CD with no type of male companionship on the horizon. Given the choices, I would say the dude with the coupon would be a healthier alternative.

To coup or not to coup, that is the question I pose to you SBM readers! What are some pros and cons of dining on a budget?

Women – Any experiences with this situation? Does it help or hurt a man’s chances with you?

Men – Have you blatently coupon’d on a date? How did you feel afterwards?