Gay Marriage and the 2012 DNC Platform 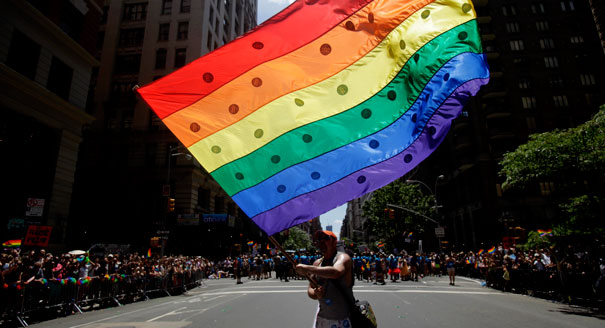 With the election of Franklin Delano Roosevelt in 1932, most people will argue that the Democratic Party answered the constantly ringing phone of progressivism. While the answer to that call has not always been as quick as it should be, it eventually receives a responder. We can point to the New Deal and it’s social welfare programs or the progressive policies of the Johnson administration and see that a lot of what has made America a better nation is because of visions and steps that not only people took, but also the Democratic Party itself. However, the issue of same-sex marriage is one that usually brings vitriolic debate with little to no results or more of a regression of rights that should be afforded to ALL Americans. Whatever side of the fence you may sit on this issue, we as a nation must debate this topic fairly and judiciously so that we continue to perfect our union.

Just this past weekend, a 15-member Democratic National Committee (DNC) Platform Committee met and decided that for its 2012 National Convention in Charlotte, North Carolina same-sex marriage language deserves a place on the DNC platform. However, this is only a draft that has to be sent to the full platform committee for final approval. Many will attribute this to President Obama officially coming out in favor of same-sex marriage earlier this year. One is forced to think, however, how intense the pressure has been from LGBT groups in regards to this issue. The clock of progression is ticking and it seems the Democratic party wants to be on the right side of history. With this issue we must always remember:

In realizing that, we as a nation must dare to recognize our cultural foundations. Furthermore, we must continually be cognizant of the fact that America was founded upon ideas, and principles as opposed to many of her predecessor or successor nations. It is in that which remains our ability to seriously consider an issue such as same-sex marriage with more sincerity and less hate. After all our nation has survived 230+ years for the simple fact that we have been at our best when we continue to remember that we the people includes all of THE PEOPLE. So this decision by the Democratic Party is bold and audacious, yet it will be the cause of great firestorm.

See Also:  The "Stay Here" Theory: A Lesson in What Men DON'T Say

What Does This Mean?

There will be a great deal of adulation and backlash that comes from this, especially if the full committee votes to send this to Charlotte for the September national convention. What makes this issue that much deeper and symbolic is that, North Carolina is a state that passed a law in May of this year banning same-sex marriages. (Six states: Iowa, Vermont, Massachusetts, New Hampshire, New York and Connecticut have legalized same sex-marriage). Many pundits will argue that the Democrats will be hurt by swing voters in crucial states if they move forward with this plan. Others argue that this is just what the Democratic Party needs to boost its base for this upcoming fall election in which they seek to keep control of the Presidency, take back the House of Representatives, and add to their anemic majority in the Senate.

In my opinion, the Party is doing the right thing again. Just as they added civil rights to their plank in 1948 prompting a walk out by it’s vicious racist and segregationist. These are rights; human rights that ALL people should be able to enjoy. If we are to live to the true words of our dear Declaration, Constitution and founding principles then we must adhere at all times to the timeless credo which says: ALL MEN ARE CREATED EQUAL. This goes for our LGBT brothers and sisters as well. They have this right and we shouldn’t deny them with regressive tools such as “Don’t Ask Don’t Tell,” (which has been repealed), The Defense of Marriage Act (DOMA), and other mechanisms the government uses to take away rights instead of expanding upon them as our founders intended.

See Also:  Can You Upgrade from an Ex?

Most people will throw out that the sanctity of marriage is under attack and that the wrath of God himself is upon America for fooling around in such “folly.” However, these same people in that same breath will claim to love America and be true patriots. This is a bit esoteric and disconcerting for a myriad of reasons, chiefly because these people have failed to recognize what America represents and is supposed to be. How can we perfect our Union if we consistently allow for the regression or extinction of certain rights? Let’s continue to focus on the things that make us better and not the things that tear us apart as a nation. Including ALL people in this discussion is the only way we can achieve the perfection of our great nation, which remains the envy of the world.

SBM Family what are your thoughts on the DNC Platform Committee Decision? Does this help or hurt the debate in our nation? Does it help or hurt President Obama’s reelection chances? Talk to me!