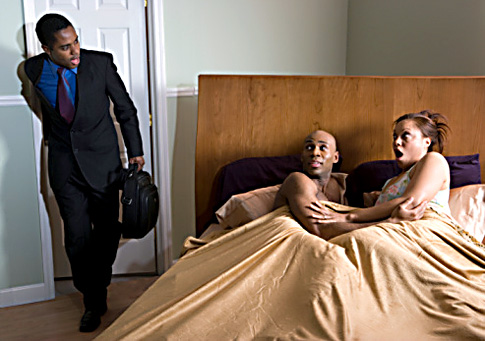 If you look at the studies into paternity, even conservative figures show that between eight and 15 percent of children haven’t been fathered by the man who thinks he’s the biological parent. – Source.

Editor’s Note: A few members of the SBM team have begun contributing their thoughts on dating and relationships to the popular website, Madame Noire. My latest post asks, Why are more women unfaithful? An excerpt is below:

There is a popular misconception that women are simply acting more like men. I disagree. In my opinion, women are acting more like successful people. It was likely more difficult to cheat back in the day when women were historically expected to remain in the home and depend on their husband’s income. As the saying goes, “with great power comes great responsibility.” History has proven, often through the misguided pursuits of men I might add, power causes some to abuse their power. Powerful men have acted ignorantly for generations, especially when it comes to women, irrespective of their marital status.

As women have improved their social and personal statuses, like the men before them, some of these women believe they are entitled to fulfill certain desires. Sometimes these desires entail enjoying the company of men who are not necessarily their husbands. In reality, women haven’t changed much, but society has changed a lot. These changes in society have allowed more and more women to have more and more opportunities to cheat at the workplace and beyond, and they now have the means to do so if you consider the fact that each generation of women is more educated and wealthier than the previous. Stated another way, women have more worldly temptations to resist than ever before. These same temptations are something men have clearly struggled with for generations.

There’s something about New York City that makes misbehaving seem a little less like misbehaving. It’s like the city dares you to take risks and try new things while seductively whispering in your ear, “I won’t tell anyone.” I once struck up a conversation at a bar with two ladies in their early 40s, both married with kids, who were very comfortable admitting they were having affairs. – CNN

You can read the complete article by clicking here. We welcome your thoughts on the post or the question itself in the comments below. Why are more women being unfaithful?