Home Featured Urban Male Chronicles: Why Should I Give You My Money?
Featured
Stories
August 23, 2012 Slim Jackson 34

Urban Male Chronicles: Why Should I Give You My Money? 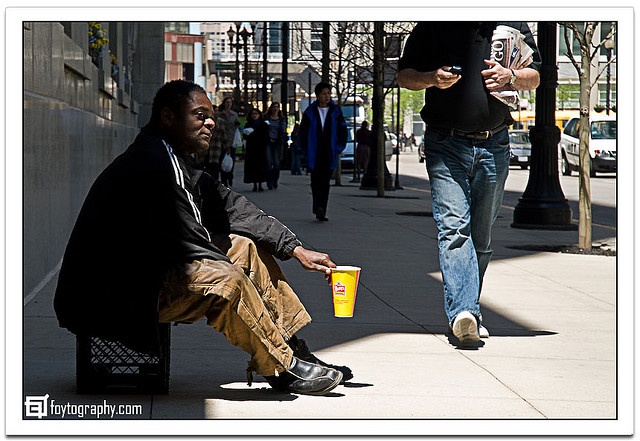 “I’m not giving you money.”

It’s crazy how many times I say this a day living in a city like New York — more specifically in Harlem. Around just about every corner in neighborhoods with people that look like me is someone jockeying for change, professionally panhandling and asking for whatever I have in my pocket or a swipe of the card. Sometimes it’s to get into the train station. Other times it’s because they want me to absorb a fee, break a bill, and part with a fraction of what’s left.

I hear cautiously compelling stories told on the train every day. I say cautiously compelling because when you hear the same person saying they lost their mother last week a month later, it’s hard not to be cynical. It’s hard not to look at the man, eyes red, in the subway station every day with what appears to be his daughter and not ask “Why are you here? What is your life about that you need to have this child with you? What are you on?” What other question would I ask when I see another man not too far down the same platform that’s been rocking the same three stations with his son while rocking back and forth, hands trembling and unable to enunciate his words. These are the things I look for now when asked for something. I can’t be every brother’s keeper. But my thought has been that if you show me that you’re really trying to be about something else, then maybe we can be family. But if at all possible and your cause is your vice, just leave the children out of it.

Callous as it is, that’s the reality that’s become. It’s tough for me to look in the mirror and say that’s who I am. I just think it’s the other side of being a product of your environment.   The more you’re asked, the more you check for before parting with the smallest amount of your hardly earned cash. Let’s be real. How many of us waste time during the day when we’re supposed to be on the proverbial clock contributing to someone’s bottom line?

I’ve been subconsciously trained to expect something significant for a dollar. A dollar I’d normally spend on a pack of skittles or a bottle of Poland Springs. You could argue that water is the key to survival. And to a certain degree, it is. But so is money. There aren’t many things you can do when you’re completely broke other than ask questions. So that’s what they do. They ask what can be spared. I make an evaluation before they say a word, then listen for them to say exactly what I expected them to say. Another reason for me to say no.

When I see kids on the train that’ve perfected their backflips or hat tricks, I’m more inclined to reach into my pocket. They don’t look like they’re going to use my money to buy crack. They don’t look like they’re going to put a dollar in a bottle and watch their liver float away. I guess you could say it’s a form of age discrimination. I think they still have a chance. Dancing is better than addiction. Even if it’s 2:30 in the afternoon in the middle of September and I feel like they should be somewhere else.

See Also:  Dream Crushing: Is It Ever For the Win? Let's Discuss...

But as of late, I’ve been focusing on self-awareness. I guess that’s the basis of this article. I’ve been paying more attention to how I react to people that I see when going about my life.

A few hours before I wrote this, I was walking toward a Taco Bell in some slacks and a collared shirt when I saw a man, thirty years old at the most, adorning a doo-rag, some ripped jeans and an old basketball jersey, lingering outside the door. I instinctively thought about how I’d say no since I knew I’d see him on the way out. Then he spoke.

Hey brother. Can you spare a–

I reached in my pocket, shrugged and handed him a quarter before making my way into Taco Bell and casually saying over my shoulder “That’s all I got in change.” It wasn’t until I got a few steps in that I realized the way I looked, the way he looked at me and then heard the rest of his sentence:

Hey brother. Can you spare a dollar or two, I’m locked out my apartment and just want something to eat. Even a taco would be cool.

Whether he was being truthful or not, I didn’t know. But there was something about the way he looked at me. It was like a mirror of assumption highlighting one of my many flaws. I’m cool with most of them, but something about this one made me feel particularly ugly. I turned around and went back outside.

Hey man. What type of taco do you want?

A dorito taco would be cool. Really appreciate it.

That taco was $1.39. I handed it to him on the way out, headed across the street then glanced back to see if he tossed it to the ground (Hey, I’ve seen people do it before). By the time I looked back, he was about thirty feet from that door and headed down the street toward a bunch of apartment buildings. I felt silly. Whether he was locked out of his apartment or not, I didn’t care. I just didn’t want him to look at everybody that looks like me the way I probably looked at him. $1.39 probably didn’t change his life, but at least it may have changed the potential perception I created. I know it changed mine.

tags: urban male chronicles
previous Rihanna's Oprah Interview Backlash And Keeping It Real With Your Own Emotions
next Are There Not Enough Black Men for Women, Or Is That Just an Excuse?