Home Around the Web I Told You! Women Go To Stadium Nightclub Too!
Around the Web
Featured
September 3, 2012 Dr. J 8

I Told You! Women Go To Stadium Nightclub Too! 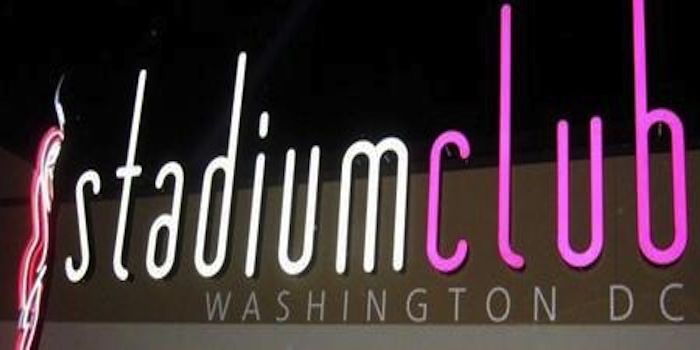 I’ve always found myself trying to explain to folks why I’m going to Stadium as often as I go. I personally think that it’s just a hangout for me and the fellas. If we had picked going to a random watering hole in the middle of Southeast DC, I would go there too. What I’ve always told myself is that Stadium Nightclub is much more than a “strip club” it is a place where a bunch of people go to have a good time. I’ve been able to get more women to come out to Stadium nightclub in DC than Park at 14th. If you’re from this area, you know how weird that is… Anyway, this was a great article posted on The Root DC by Delece Smith-Barrow. I encourage everybody to check it out and let me know your thoughts. And… oh yeah, your homeboy’s birthday is coming up, we may be at Stadium early in the month of October. Libra season is coming up!

It’s Friday evening in D.C., and three women arrive at the Stadium Club, a converted warehouse in Northeast. It is flanked by rundown brick buildings and a gritty car repair station. Rough gravel replaces sidewalks, and the street is largely deserted. Other than the club, the only sign of life is a gas station a quarter of a mile away. Stadium is like a diamond in the rough, but in the way tarnished silverware shines when placed next to plastic spoons.

The women go inside.

“I wasn’t expecting it to be this nice,” says Rashanda Robertson, 33, an Atlanta native who’s in the city for graduate school.

Tonight is her first visit to a strip club. To her left and right are clusters of women, outnumbering the men. Women in heels. Women who teach. Women who advocate as social workers. Professional women. Heterosexual women. Women just like her.

Unlike many strip clubs — which are narrow, dark and dominated by men — Stadium, with color-changing chandeliers lighting up 14,000 square feet, has become a chic hot spot for young African American women. They host bachelorette and birthday parties here, buy rounds of drinks and chitchat while other women work the pole. The club is a bucket-list item for black yuppies. It falls somewhere between Dupont Circle day parties and concerts at The Park at 14th club.

They swarm to Stadium’s happy hour — $10 for unlimited drinks from 6 to 9 p.m. — but you can also find them any night of the week. The setting has become so popular it will be the backdrop for the reality show “Strip Club Queens.” The show, produced by Newton Media Group, will follow the lives of five Stadium dancers and one waitress. No network has signed yet, says club co-owner James Tru Redding, but three channels have expressed interest.

“It doesn’t really look like a strip club,” Robertson says.

By 7:45, the crowd is livening up. There are about 30 men but twice as many women dancing to Chris Brown’s “Strip” and other hip-hop tunes. The “entertainment” have removed their mesh shirts and skin-tight dresses, leaving nothing but a garter to hold their tips.

Male patrons thank them with dollar bills, but it’s a sea of women who truly show their gratitude every week, coming back again and again.

“Sixty percent of the club on any night is women,” Redding says.

See Also:  What You Need to Watch in The 2012 Olympic Games