SBM Sports: A Look Ahead To The College Football Season feat. @MrGetItOnJones 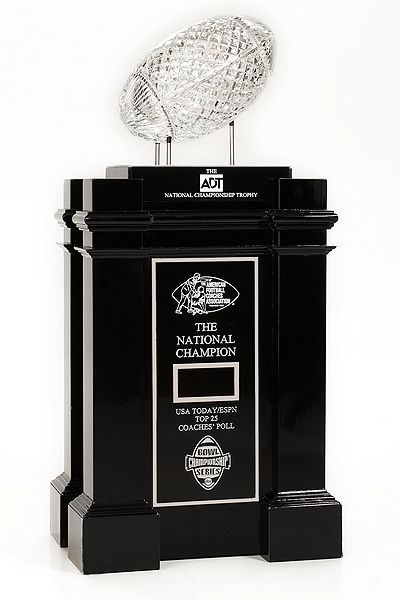 Football season is off to a great start in the NFL and NCAA. High profiile games on each level have set the table for an entertaining year ahead. After a boring first half, Tony Romo led the Dallas Cowboys to a surprising win over the division rival Giants, and Kevin Ogletree let us know that he is alive. On the college front, Alabama destroyed my beloved Michigan Wolverines, proving once again that the SEC has men and 95% of other teams have boys.

For the college football primer, SBM enlisted the help of our resident expert, Ali Campbell. Here are his thoughts with my reactions interjected in bold italics:

Can’t argue with this list. The only other teams that could play their way into the top five are Florida State and West Virginia. FSU can run through the ACC with enough high profile games (Virginia Tech, Miami, Clemson, Florida) to justify such a high ranking. West Virginia has a great quarterback in Geno Smith. The Mountaineers also have a run of four straight ranked opponents late in the season (Kansas State, Oklahoma State, TCU, Oklahoma) that will raise their profile if they get through it 4-0.

5 teams that will do better than you expect:

1. Purdue – Purdue has a shot at winning at least the Leaders division in the Big Ten.  Ohio State and Penn State are ineligible so it’s a two-team race between Purdue and the Wisconsin for all intents and purposes.  If they can pull of the upset against the Badgers at home, it’s there for the taking.

As an Indiana University MBA grad, I have to disagree. Can’t praise Purdue around here.

2. Utah – Everyone has USC and Oregon already in the Pac-12 Championship but Utah gets USC in on a Thursday night game in Salt Lake City.  That game is very winnable for the Utes and if they pull off the upset, the rest of the division shouldn’t give much resistance to Utah.

Agreed. Utah is flying under the radar, and will get their chance at the limelight against USC under ideal conditions. This game can make Utah’s season.

3. Missouri – So everyone thinks the Tigers went to the SEC to die a short death.  This may be true in the long run but in today’s weakened SEC East, the Tigers have an outside shot to win the division. They have a returning productive starter at QB in James Franklin, a very good receiving corps and just a good enough defense to hold its own against the overrated SEC offenses.

I am one who thinks Mizzou will die a short death. I don’t think they will survive their schedule, even with a solid offense.

4. Texas A&M – Just like Missouri, everyone thinks the Aggies will go to the SEC West and die.  This team is very good on defense and will present something on offense that the SEC is not used to seeing; a live and able passing game. West Virginia tuned up the great LSU defense of last season for 533 yards with a very similar offensive scheme.

TAMU is stronger than Missouri, and they’ll need to be. They have a tough schedule, and will have a hard time living up to your praise.

5. Baylor – Just because all-timer Robert Griffin III is now employed by Dan Snyder doesn’t mean the sky is falling in Waco, TX. Nick Florence will fill in just fine for RGIII.  Art Briles is an excellent coach that can score with me, you and nine of your old girlfriends.

Baylor has big shoes to fill with the absence of RGIII. I agree that they can be successful, especially with diminished expectations.

Heisman finalists (in no particular order): 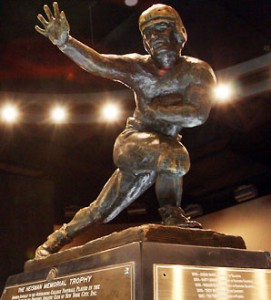 See Also:  How Do You Balance Love and Ambition?

Denard will play himself off of this list by the end of the season. The rest of the country seems to have figured him out since his Freshman season. I am a HUGE Michigan fan, so it hurts to type this, but I’d put Geno Smith of West Virginia ahead of him.

The Heisman Trophy winner will be . . .

Matt Barkley, QB, USC – Everyone wants this guy to win the Heisman.  The guy that could have left school and challenege for the #1 pick in the draft decided to come back and finish “unfinished business.” The vote will not be close if USC is in the BCS Championship Game. It may not be close if they merely play in the Rose Bowl. I’m not sure if Barkley will be the most deserving of the award but he sure will get the most votes.

I think there will be a backlash against Barkley, just like Andrew Luck last year. Voters expect Barkley to win, so the expectations are sky-high. Plus, USC will be very good this year, so Barkley’s numbers will suffer a bit in blowouts when the Trojans run the clock out and play backups. My winner is Montee Ball.

See Also:  A Lesson From Big Brother: Why He Should Want What You Want

Agree. USC has been overlooked because of their NCAA sanctions, and I see them regaining the dominance they had in the Reggie Bush/Matt Leinart/Carson Palmer era. You could replace LSU with (Random Dominant SEC Team), but they have the talent and depth to get back to the big game. 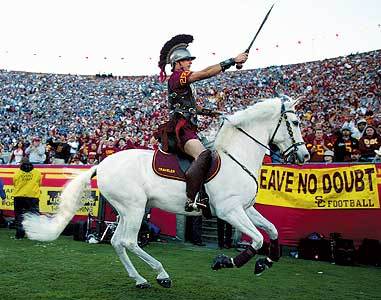 These are our thoughts. What do you think, SBM Football Fans? Who do you have winning it all? Who is taking the Heisman? Hit the comments and let us know!

previous How Do You Stay True To The Game And Your Friends Of The Opposite Sex?
next Do men respect abstinent women?