Home Featured SBM Sports: Reigning in the wildest storylines from Week One in the NFL
Featured
September 11, 2012 Joe Sargent 17

SBM Sports: Reigning in the wildest storylines from Week One in the NFL

There are many things I love about Week One of the NFL season: chicken wings, beer, and rooting for my fantasy teams (went with the name “Buzz Killington” this year) top the list. Even the world’s best chicken wings can’t overcome the one thing I hate most though: the yearly overreaction to what we just witnessed.

Projecting how our favorite teams and players will perform is part of what makes sports so fun to follow. It has given personalities like Skip Bayless a career. Clarity is important, though, so let’s tackle a few media and fan overreactions, and apply a little sanity:

RGIII is going to be a star 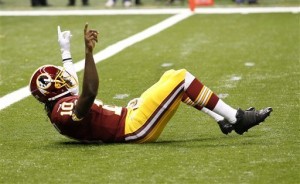 For his NFL debut, Robert Griffin III showed glimpses of brilliance. Griffin’s 320 yards, two touchdowns, and zero interceptions are the best numbers ever for a rookie QB in his first start. As a Richmond, VA resident (100% Redskins Country), I have already seen the impact this game has had on fans in the area. I heard it all while watching Griffin lead his team to an unexpected 40-32 win in New Orleans: “RGIII will lead the Redskins to the Super Bowl within two years.” “RGIII could lead the league in passing.” Smh.

To believe these statements ignores some key facts. The Redskins have holes to fill in their defensive secondary and offensive line before they can be taken seriously. Also, the revolving door Coach Mike Shanahan employs at running back makes it hard to count on a reliable starter to take pressure off of Griffin. On that note, Alfred Morris, an unknown before the start of the season, gained 96 yards rushing with two scores. But can Washington really count on him when defenses adjust to Griffin and take away his passing lanes?

See Also:  The NFL as Seen Through Breaking Bad

Griffin may turn into a superstar, but there is no way we can tell after one impressive performance.

The Jets have figured it out

Since ESPN decided to set up a studio at the Jets’ training camp, all sports fans have had the chance to see and read about the Jets’ offensive struggles through the preseason. The first-team offense (Tim Tebow included) combined for zero touchdowns in all four preseason games. This included some truly ugly passes:

Just look at that pass again. There is no way you can come back from that after one game.

The Jets beat the Buffalo Bills down this Sunday with six total touchdowns (four from the offense). Mark Sanchez looked like the confident first-round pick that his fans expected. As importantly, he didn’t look out-of-sync while being subbed in and out for Tebow.

In reality, the Jets offense came through against a Bills team that, while improving, showed last season that it could be scored on. A lot. The man running this offense, Tony Sparano, was most recently leading a shipwreck of an offense in Miami. And while the defense made some big plays, it also gave up 169 yards to career-backup CJ Spiller. There are still plenty of questions about this team. For God’s sake, look at Tebow throwing that ball again.

Peyton Manning is back

The media’s favorite active quarterback (all-time favorite being Brett Favre of course) made a successful return to football with a win over the Pittsburgh Steelers Sunday night. Manning spent long stretches of the game on the bench, but made the most of his opportunities, throwing for 253 yards and two 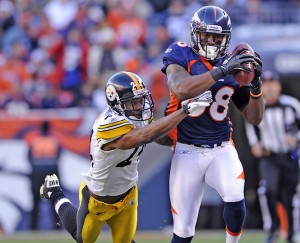 Chris Collinsworth, one of the announcers of the game, spent a lot of time telling his audience about Manning’s arduous return to the game and how close Manning looked to his former self. To his credit, Manning played well, especially running the no-huddle offense.

What Collinsworth spent far less time detailing, however, is that Manning was playing against the same offense that gave up even more yards to Tim Tebow in the playoffs last season. I won’t direct you to the clip above again. Suffice it to say that I had every reason to believe Manning, who does not throw that horribly, would play well against Pittsburgh. In 2012, the legend of the Steelers’ defense is better than the actual guys on the field. I look forward to seeing what Manning does against the Falcons next week.

Pencil the 49ers into the Super Bowl

The San Francisco 49ers, a hot pick for the Super Bowl, made their fans look smart Sunday with an impressive win at the Green Bay Packers. Alex Smith outplayed Aaron Rodgers, the defense looked like it hasn’t missed a step from last year, and Kyle Williams fielded several punts without any fumbles(!!). From top to bottom, the 49ers looked every bit of a Super Bowl contender in this game. 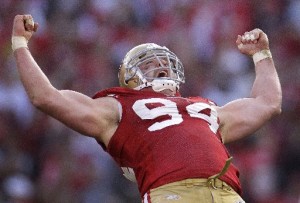 Before buying tickets for the Big Game in New Orleans, Niner fans should remember the NFL’s history. We learned again last year that you can play your way into Super Bowl contention in Week One, but you absolutely cannot play your way out of it.

Every team, injuries aside, will have a different makeup once the playoffs begin. The Giants lost to the Rex-Grossman-led Redskins by 14 in Week One last season, went 9-7 (with another loss to Washington), then–won the Super Bowl. Truthfully, no one is out of the running for the Super Bowl; which means you can’t put San Francisco in just yet.

Hopefully this counseling session helped you take off your rose-colored glasses. “Fan” is short for “fanatic,” sure, but we are all better off taking our sports with a side of perspective.

What sports predictions have you formed coming out of Week One? Has this post helped you see the light? Let me know below!