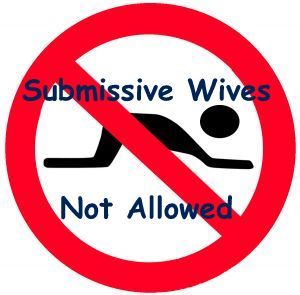 As you know, the SBM staff loves to answer reader questions. We aren’t experts, but we don’t frown on giving you our true opinion and letting our community chime in as well. I received a few emails and questions all over in regards to one topic, so I figured I’d use social media and the good folks at SBM to provide insight. The question posed was in regards to women and submitting to a man:

Does being a submissive woman keep a relationship/marriage together? Does a man prefer his woman to be submissive sexually or in Lifestyle or both? Are men seeking submissive women weak minded and controlling?

Before I delve into the questions, I know that there have been talks on Women and Submission previously all around talk shows and the Internet. I had my own general views, but my peoples @JasFly put her thoughts so eloquently I wanted to share them with you (read from the bottom-up): 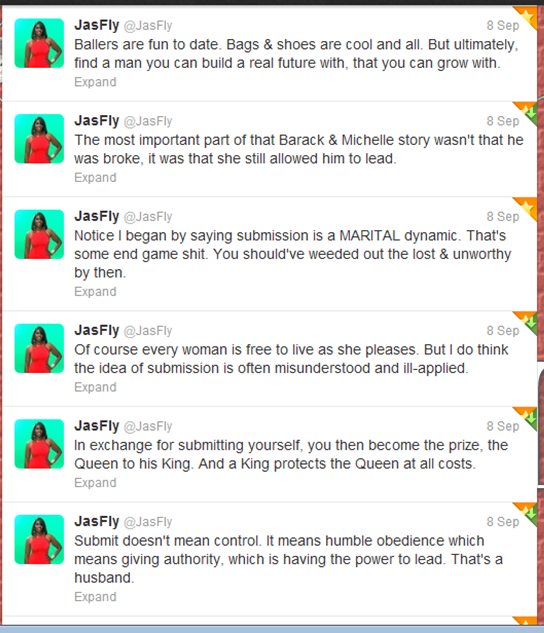 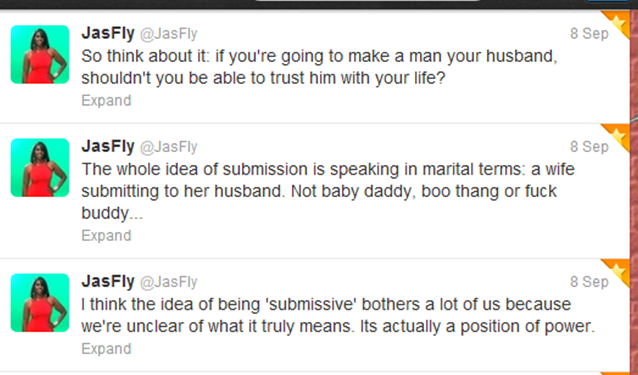 These thoughts lead me into questions 1 & 2: Does being a submissive woman keep a relationship/marriage together? Does a man prefer his woman to be submissive sexually or in Lifestyle or both?

To me, the answer to this question depends on the relationship. To receive a woman’s submission is the ultimate vote of confidence a man can receive in a relationship. She hands you the keys to drive the relationship in the appropriate direction, without fear of getting lost. If you do go off course, she has faith you will get each other back on the right path. Do I think it’s essential for keeping a relationship together? I don’t think so. It should be but one part of a much grander scheme for a successful relationship. If people look towards submission to be the main key to making a marriage or relationship work, then that is a problem. What about the relationship where a woman isn’t submissive that works? What about relationships where a man submits to the woman? I don’t know if there are many like that, but I think when used in its proper context (as Jas stated), being submissive will help more than hurt, if the man is even comfortable with the pressure and responsibility that a woman’s submission entails.

See Also:  Does Submission Give Women Power or Make Them Slaves To Their Husbands?

In the bedroom, once again it’s all preference. Some men like to take the lead, others want direction. I don’t think men think too deep with sex. If it’s a go, then we go! Nothing too complex, you know?

This leads me to believe that you associate a negative connotation with a woman’s submissiveness towards men. There is a difference between being submissive and being enslaved/a pushover/mindless. You can still take charge of parts of a relationship while being submissive. I think you are talking about a man ordering a woman to do any and everything and acting as her boss. Any man who does that to a woman in a relationship is definitely a control freak. He either looks at woman as play things to answer his every desire or it’s some type of backlash from other areas in his like that are lacking. A man who wants a submissive woman doesn’t want a woman who is easily controlled. He wants a woman who will entrust him with leading her and commanding their relationship to go far. I believe in men being a household leader and having huge responsibility, but you have to earn that from a woman. If he can earn that, then that means a woman truly loves you and trusts you. That’s real right there!

Women, what are your thoughts on the Submissive debate? Pros/Cons? Does it still mater in 2012 relationships? Men, do you actively seek a submissive woman?

See Also:  Can You Sleep With Someone Else While On A Break?