Why The Hell Doesn’t Jay-Z Understand The Importance Of Occupy Wall Street? 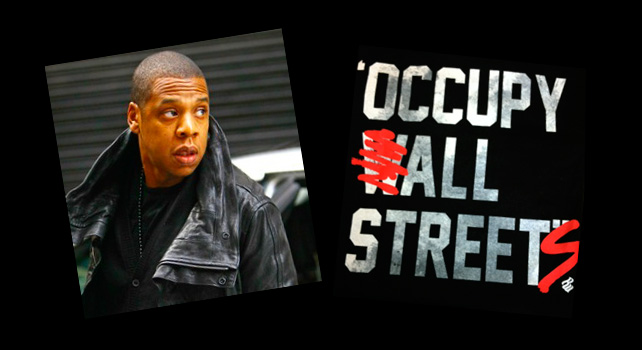 There used to be a time when hip hop stars made it very clear that they didn’t desire to be role models, or that they weren’t the people that should be sought after for opinion on matters such as politics and social injustice. Although you always had artists like Public Enemy and Dead Prez, the gross majority of rap/hip hop were very clear that they would steer clear away from these topics. It made sense. Hip hop should focus on wax, not Capitol Hill.

Recently, Jay-Z startled us by admitting that he knew very little about the Occupy Wall Street movement. In all honesty, Jay-Z didn’t really say he didn’t know about the Occupy Wall Street movement. He said what a lot of people said behind closed doors. He couldn’t figure out what the movement’s goals and objectives were and because of that he found it difficult to support the movement.

“What’s the thing on the wall, what are you fighting for? … I’m not going to a park and picnic, I have no idea what to do, I don’t know what the fight is about. What do we want, do you know?”

“I think all those things need to really declare themselves a bit more clearly. Because when you just say that ‘the 1 percent is that,’ that’s not true. Yeah, the 1 percent that’s robbing people, and deceiving people, these fixed mortgages and all these things, and then taking their home away from them, that’s criminal, that’s bad. Not being an entrepreneur. This is free enterprise. This is what America is built on.”

I’m going to share with you what Russell Simmons said in response to Jay-Z, but first, let me give my initial reaction. Regardless of what Russell is about to say, this statement makes it obvious to all that Jay-Z did not desire to pick up the phone or have an assistant figure out what Occupy Wall Street was about. We call that, complacency. However, Russell Simmons responded with an informative statement without being condescending or chastising Jay for his comments:

“So, Jay, here’s the deal. You’re rich and I’m rich. But, today it’s close to impossible to be you or me and get out of Marcy Projects or Hollis, Queens without changing our government to have our politicians work for the people who elect them and not the special interests and corporations that pay them. Because we know that these special interests are nothing special at all. In fact, they spend millions of dollars destroying the fabric of the black community and make billions of dollars in return…”

“This is just one issue that has been bought and sold. If we have to occupy Wall Street or occupy All Streets* to change the course of direction of this nation, then we must. We must take our democracy off the market and let the world know that it is no longer for sale! Mic check!”

* In the midst of the Occupy Wall Street movement, Jay-Z decided to sell T-shirts that said, “Occupy All Streets.” Then… he released a statement saying that his tee shirts were not a reflection of his support for Occupy Wall Street and he removed them from shelves. This guy…

Here’s the thing, I’m actually not mad at Jay-Z for knowing anything about Occupy Wall Street. It’s been a long time since I’ve ever looked to a rapper to take lead in any movement against injustice in our society. Furthermore, I think it’s extremely problematic that we put these entertainment figures in the position of taking the lead or being a voice when in fact it should be our community and civil rights leaders that we are looking to for leadership.

See Also:  Why We Shouldn't Expect More from Jay-Z

CBC weekend is coming up in a couple weeks and I remember the point in time when I started thinking that the weekend was an absolute joke. I remember one time a few years back, Diddy and Jamie Foxx were “ambassadors” for CBC weekend. The only thing that I could put my finger on that they did for the CBC was throw a few great parties at Love Nightclub. That’s a problem. I understand that in an attempt to increase exposure of these issues we’re bringing in entertainers who seem to garner more attention than a Hill Harper or Tavis Smiley, but damn son. There’s got to be a better way.

As it pertains to Jay-Z, the inconsistencies in his rap music make me wonder if we should ever go to him with these issues. Jay-Z was asked for his thoughts on gay marriage not too long ago and he said that he thought that gay people should be able to marry; I consequently thought of how many times I heard him use the f-word in his songs. And then there was this video…

How many times did these guys plan on saying the n-word while rapping a tribute song to the first Black President in the history of America? I actually wrote an article about this incident and others like it over a year ago.

[Jay-Z]
I pledge allegiance, uh, to my Grandma
For that banana pudding, our piece of Americana
Our apple pie was supplied through Arm & Hammer
Straight out the kitchen, shh don’t wake Nana!
Built a republic, that still stands
I’m trying to lead a nation, to leave to my little man’s
Or my daughter, so I’m boiling this water
The scales was lopsided, I’m just restoring order
Hold up, here comes grandma, what’s up YaYa?
What’s that smell? Oh I’m just boiling some agua
No papa, bad Santa
The streets raised me, pardon my bad manners
I got my liberty, chopping grams up
Street justice, I pray God understand us
I pledge allegiance to all the scramblers
This is the Star Spangled Banner

In his own right, Jay-Z has been an outstanding performer, entertainer and rapper for a very long time. This shouldn’t take anything away from those accomplishments. This should shed light on the dangers of allowing our entertainers to influence our political stances. Many Jay-Z and Kanye West fans were standing alongside The Throne when their album dropped. While songs like Made In America and Murder To Excellence hinted at a new revolutionary side of hip hop, I think it’s pretty obvious what’s going on here. Rappers’ job is to sell records. Let them sell records. Anything else, I’m sorry, they’re just not qualified.

What are your thoughts about hip hop artists and entertainers stepping into the realm of politics and social responsibility? Outside of participation, is there an expectation that they be at the forefront of the charge? Do you get worried sometimes that these topics might be a bit out of their reach? Let me know your thoughts on these questions and more.

PS – This isn’t just about Jay-Z. We could have gone in on Nicki Minaj & Mitt Romney today too. We have these things called word counts, but I’m more than willing to chop it up about it in the comments section.