I can’t remember being more excited about the potential of a new Hip-Hop Artist than I was when I discovered Lupe Fiasco. After listening to the original Food & Liquor for the first time, I told one of my close friends “When it’s all said and done, Lupe’s catalogue should rival that of all the greats.” Then came The Cool and Lasers. Both albums contained high quality lyricism, decent production and standout tracks, (Hip-Hop Saved My Life, The Show Goes On) but both fell way short of the potential greatness I expected after Food & Liquor. It was like Lupe fell into this weird doldrum of overly conceptual, psuedo-righteous, yet strangely formulaic pop-rap. Drop a single with a random white tenor and then fold that into a highly stylized “concept” album that’s a lot more ambitious than it is actually good. Then complain. About everything. 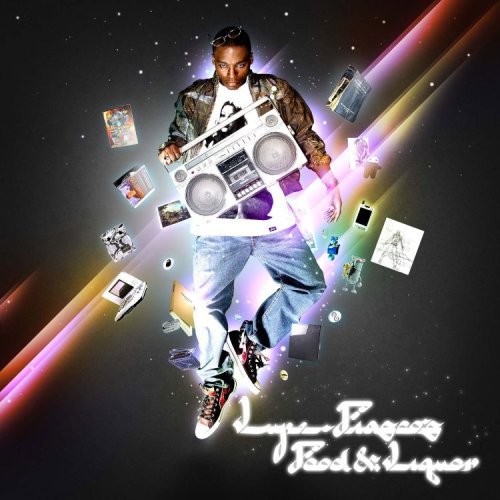 But it wasn’t just Lupe’s album inconsistency that left me unexcited about the prospects of a Food & Liquor sequel, it was also his sense of entitlement. Somewhere after the original F&L, Lupe started to get political. He became the kind of artist who acted as if we should all feel honored to have his presence in Hip-Hop. Indicative of this are his frequent, highly publicized “retirements”. Anytime he’s attacked or analyzed, Lupe threatens us with the absence of his presence — reminding us that our appreciation for the fact that he’s at least trying to say something should make him exempt from any real criticism. It started with him vocally exercising his right to not vote. Then came statements on everything from 9/11 to Israel, to Barack Obama and most recently – black America’s use of the term “Bitch”. It’s not that I’m against rappers speaking out on issues — actually — I wish more would. My problem with Lupe is that his statements always seem under-researched, overly-preachy and at times, hypocritical. It’s like an amalgamation of every bad conversation you’ve ever had in a barbershop and every random conspiracy-theory video ever created on YouTube. The mere fact that your music is semi-conscious does not mean it’s inherently dope. Conscious can be wack too. It wouldn’t be so bad if Lupe didn’t present these opinions under a guise of super-progressivism and as if he’d read every scholarly work available on these subjects. 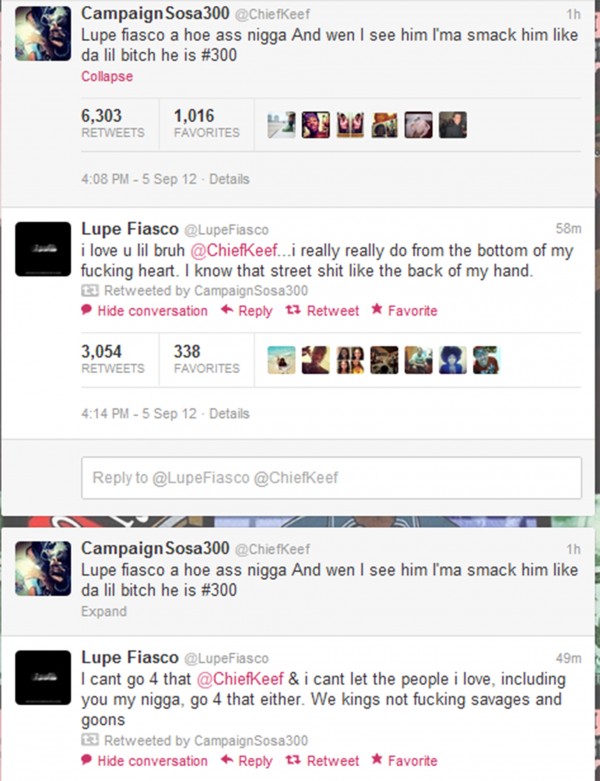 This inconsistency is best iterated in Lupe’s recent twitter beefs with Chief Keef, DL Hughley and Roland Martin. Lupe criticizes Chief for his insensitive response to the murder of a rival Chicago rapper, and for the general ignorance Keef portrays in his music. Chief Keef’s response is as you might expect from an 18 yr old kid from the ghetto who goes by the name Chief Keef. He tells Lupe he’ll smack the sh*t out of him when he sees him. Lupe decides then (surprise, surprise) that rap’s no longer for him. He tells Chief and the rest of the twitter world that he’s retiring… and that’s the end of of that beef. On the flip side, when D.L. Hughley and Roland Martin recently criticized Lupe for his stance on voting, Lupe responded with a series of semi-coherent tweets, the worst of which being “sick of you uppidty black niggas hiding behind your political correctness… MLK JR would be ashamed of yall… we still dying in these streets..” In one breath he criticizes Chief Keef for the way his music portrays our culture and impacts our people — and when Chief responds aggressively, Lupe turns into a pacifist. In the next breath, when someone challenges the impact his music is having, he responds incredulously, unable to accept the same criticism he was willing to give. It’s this sort of inconsistency — in message — and in response, that makes Lupe so utterly frustrating.

So, all that said. With all that as the backdrop for his most recent effort… as it turns out, Food & Liquor 2: The Great American Rap Album is actually dope. And while it doesn’t have the same heft as its precursor, nor is it quite as groundbreaking in its separation from everything else out congruently, for the first time in his career Lupe’s given us an album that can be played straight through — from front to back — without skipping a song. In that way, it actually surpasses the original.

The subtitle for Food & Liquor 2 gives us a hint of where Lupe’s going, thematically, with the album. Reminiscent of Dave Eggars’ A Heartbreaking Work of Staggering Genius, Lupe’s subtitle (The Great American Rap Album) is both accurate and ironic in that he’s given us a phenomenal body of work, but has done so with both an acknowledgment and a rejection of the general standards by which great Hip-Hop albums are judged. He’s telling us that he understands our expectations and that with this album, he plans on simultaneously meeting them while also showing us how myopic they are. He does this by touching on all of the “classic album” prerequisites, but with a twist or flare that either elevates, reimagines, or dismantles their convention. Strange Fruition is an alternative look at hustler music – rethinking the real world trappings of street corner life. Around My Way (Freedom Ain’t Free) is the expansive, all-inclusive and purposely generalized nod to Hip-Hop classicism. Bitch Bad, on the surface sounds like one of the strip club bangers you might hear from the likes of Drake and Weezy – but it instead attempts to address the fundemental flaw in our generation’s varying use of the term “Bad Bitch.” And while I agree with much of the criticism leveled on the third verse’s poor logic and unintentionally misogynistic psychoanalysis — the verse’s shortcommings aren’t great enough to ruin the song or diminish the album. Brave Heart is the big sounding, athemic head banger not unlike the type of stuff Waka Flocka or Young Jeezy might put out – but instead of Waka’s inconherent exhortations and Jeezy’s neverending trap rap, Lupe gives us the most complex couplets and bars we’ve heard since his first album. Lyrically, Form Follows Function, is the album’s best song. Harkening back to the high level train of thought raps from songs like Theme Music for a Drive By from the orignal Food and Liquor, Form is a pure exhibition of skill.

Sponsored by me and of course you know who enforced, Now that’s three mis, like you warming up your vocal chords. Add a fourth if your vocals hoarse, like Mister Ed. Get out of pocket have a horse’s head in your bed. Now that’s what I call a good night’s rest.

I know – I too am surprised. After two consecutive duds and a host of annoying political statements and twitter rants, Lupe finally gets back to doing what he does best… rapping. This morning, I listened to the original Food and Liquor — what separates it from the two albums that followed it was the perspective from which Lupe rapped. He rapped with the voice of a man who could identify all of the problems, but aslo appreciated and understood his inability to solve them. He accepted that fact much the way we all accept our own limitations. It was in that limitation that Lupe’s humanity shown through — it made him relatable and real. Since then he’s become somewhat of a caricature of himself — not because he shucks and jives like many of our artists, but because he presents himself as all-knowing and above the petty conventions of this world the rest of us inhabit.  With Food And Liquor 2: The Great American Rap Album, Lupe has returned to Earth, walked amongst us, and reminded us why we were all so excited about his potential in the first place. It is without a doubt, Lupe’s dopest work since is forefather. With this album, Lupe proves once again, why he’s as nice as the nicest rappers around.

Are you a Lupe fan? Have you been following all of his recent drama? What are your thoughts on him, and this most recent album.

I’m so low right now… all the way low… and firing.

See Also:  We Made Love at Midnight: My 10 Favorite Artists from BET's Midnight Love

tags: Food and Liquor Food and Liquor 2 lupe fiasco music Reviews
previous SBM Sports: What's the Point of College Athletics Anyway?
next From His Mother to You: How Men Learn to Treat Women