Home Featured Can You Love God and Gays – The Black Church and ‘Stay At Home’ Theology In the 2012 Election
Featured
September 26, 2012 _AndreDFields 17

This presidential election season has been nothing short of amazing. As I sit back and watch intently, I have come to see so things that have me truly captivated. Then there are examples of things that have me completely perplexed. The black church in America has played a gargantuan role in securing rights for marginalized individuals. With its motivation based on the social gospel of Jesus Christ which tells us to love our neighbor and to help the poor and least among us, the black church has done a phenomenal job throughout its existence. However, with all of its good work to aid the poor and to proselytize the message of Christ here on earth, the black church has some areas in which it fails to recognize one of central messages Jesus Christ himself sought to teach: Love.

The highest form of love, the bible calls it agape. It’s the magnanimous Christ like love of burdening oneself with the sins of an entire people so that they might live. Meaning, that one should not have hate in their heart for anyone or anything. However, when some of these ministers speak, it seems to be the antithesis of what Christ spoke about in his gospel. Black churches and pastors have significant influence over how their members think and what they do. The pastor in a black community is supposed to be the moral leader and direct their parishioners in ways that would be becoming of the kingdom of heaven and message of Christ. However, often times these same ministers — in a display of deceitful abuse of the power and influence they wield over parishioners — push distorted views of the text.

This year, it is quite disconcerting that black pastors across this country are telling their obsequious members to avoid casting their ballot this presidential election, lest they elect a Mormon or a President who supports marriage equality for all and a woman’s right to choose what she does with her body.

These ministers are doing a great disservice to their communities considering the wide range of influence their have in the grips. As I sat and chatted with a few coworkers the other day about this issue, we all came to one similar conclusion: The black church is forgetting its history. What I meant by them doing a disservice has a few parts. 1) By preaching that parishioners should eschew the ballot is going against the basic tenets of citizenship, which the church fought tooth and nail for during the civil rights movement. Imagine if men like Dr. King, Abernathy, Shuttlesworth and Lowry had been so stubborn as to not support John F. Kennedy because he was a Roman Catholic or support Lyndon Baines Johnson because he palled around with notable segregationist racist, Senator Richard Russell. Do you think we would have gotten a voting rights bill, a civil rights bill, or a president (Johnson) whose policies helped African Americans in a myriad of ways? No, we would have not. Those men were able to rise above the customary passions of political debate to advocate for the betterment of the entire community.

See Also:  Americans In Bed: A Lesson In Love On HBO

The pusillanimous church of today however, is doing quite the opposite in their defense of staying home on Election Day. 2) The church should understand that while social issues are important this year, African American unemployment still lingers at 14.1 % which is 6 points higher than the national average of 8.1. What these clergymen should be telling their members to do is to pay attention to the economic implications of this election. Which candidate is going to put in place policies that will essentially help out this community? Do you want to be a part of that 47% of Americans who are ignored and aren’t the priority of a President or do you want to the President who works and continues to put into place policies that will help out you and your family? The black church, by exerting this insouciance, is being quite cavil to what really matters this year to their members. If someone is a homosexual and wants to be married isn’t affecting many families as much as a father who goes to interview after interview only to return home to his wife and family having his dignity scarred at not being able to find a job. The economic battles are more important to our community right now. These are the fights the good reverends, bishops and elders should be fighting. However, their edicts may be fait accompli in regards their parishioners.

This is a serious problem across the nation. I have sat in pews and have cringed at some of the things that have come out of the mouths of ministers in regards to direction of our nation. A prime example would be last summer after New York passed the Marriage Equality Act, I went to church with a friend of the family the following Sunday. What subsequently happened showed me that people really don’t understand the message of Christ. It showed me that they nitpick certain parts to make you believe they understand — with their beguiling smiles and shouts of ‘hallelujah’ and ‘praise the lord.’ This façade is truly disconcerting, but I guess that is where God comes in to judge.

The discussion that day started with the minister admonishing and scolding Governor Cuomo and the New York State legislature for passing a Marriage Equality Act. In what was reminiscent of the Rev. Jeremiah Wright’s “god-damn America…US of KKK” tirade, I sat in utter disbelief that ministers would use their pulpit to engage in hateful speech, the kind that is the antithesis to the message of loving everyone as Jesus Christ instructed through his message and apostles. It was what I believe to be the nadir of my church experience. However, my faith wasn’t shot, it only made it stronger. How could these men of God be so inattentive to a message that is as transparent as anything can be? It is a question with which I still find myself struggling. 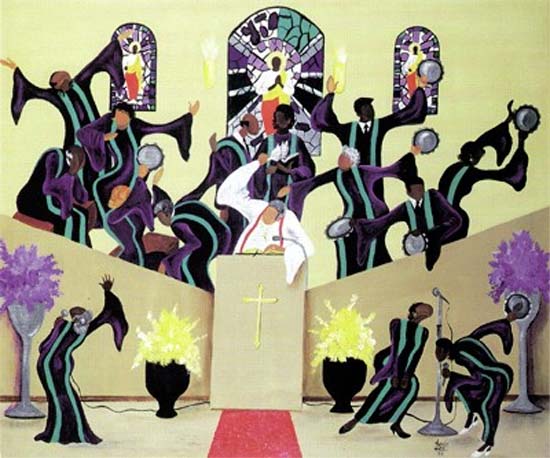 I sometimes wonder what Paul, the Apostle to the Gentiles as he has been called (and most transparent of all the apostles if I may add) would say in a letter to the black church? Surely, he’d call on them to continue to love as Christ loved the world, even those whom society had rejected. I’m sure he’d speak vociferously on these ministers to welcome those marginalized people to the House of God as a temple of acceptance and comfort rather than grounds of judgment and scolding. Love triumphs over hate would still be the message. A message the black church must continue to spread. This is the root of that central message of Christ. But, there will be those who continue to look at the text in a different light.

See Also:  The Good, The Bad, The Ugly of a Man's Ability to Compartmentalize

I would encourage black parishioners and any other people of good faith to ignore what their ministers are telling them about ignoring Election Day in protest of positions such as a man being a Mormon or a President supporting gay rights. It’s ignorance in its purest form! Black people shouldn’t capitulate or acquiesce to this type of perfidy. Instead, we should be smart as we have been in the past to make our voices heard and fight for a more perfect union. We must understand that there is so much more that is important this year than who someone is sleeping with in the privacy of their homes or what a woman is choosing to do with her body. Jobs, Medicare for our elderly, health care for our sick are all issues that we should be focusing our attention on. It would be wise for these parishioners to muster the moral courage to reject these tactics of fear and insouciance. It would be wise for blacks to remember the struggle that people went through (some of these parishioners themselves) to obtain our right to vote. That shouldn’t be ignored. People died and fought diligently so that this sacred right would be afforded to use. Now it is this generation’s duty to protect and respect that right by exercising it this November.

tags: 2012 election God and Gay love The Black Church
previous From His Mother to You: How Men Learn to Treat Women
next Michelle Obama and Ann Romney: The Women Beside the Men