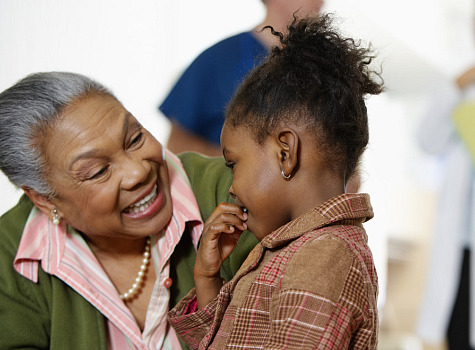 We all have parents but interestingly enough, we don’t talk about them very much. At least we don’t talk about them very much in the blogosphere. For the wide variety of subjects covered, usually mom and dad only get honorable mention on their respective holidays, Mother’s and Father’s Day. Maybe our communities aren’t that close or we’re too busy focusing on more personal subjects, like relationships and why men and women are  different. I wanted to take a break from the usual rigmarole. Today I want to talk about what happens when children have to start raising our parents?

Honestly, the idea for this post didn’t come from my own family. As I mentioned before, my father got sick, but he recovered outside of the hospital. The idea actually originated from a story a close friend was telling me about the difficulty of coping with his father’s heart attack.  While he eventually made a full recovery, there was a brief period during the recovery phase where he was essentially incapacitated. He could still talk and move, but it required assistance. My friend, fighting to choke out the words without breaking down, told me that two of the most difficult things he had to do during that time was 1) remain strong while others grew increasingly weak under the toll it took on the family; and 2) support his father while he was physically weak.

This is not to say he wasn’t ready or did not successfully embrace this role despite the difficulties of doing so. I’m pointing this out because it is a role that he, like most people, never thought he would have to face. The day when his father – and his family – would rely on him for support instead of the other way around.

See Also:  Why Your Man Won't Go Down: Could You Live Without It?

Many of us ignore the subject because it’s difficult to talk about; however, the fact of the matter is we are supposed to outlive our parents. What many of us fail to consider, our parents included, is what happens in that period between our parents growing old and their inability to provide for themselves independently? Many of us have only had to cope with this reality in the form of our grandparents. As we grow older, unfortunately, more and more people will face situations similar to my friend’s experience. Just as we relied on our parents for physical, emotional, and financial support in our youth, as they age, they may in turn become emotionally, physically, or financially dependent on us as young adults. If you’re married, this situation may arise up to four different times – and that’s only including the immediate family.

In America, we haven’t adapted the multi-generational household structure. You rarely see a multi-generational family choosing to live under one roof in this country. Instead, the unspoken agreement usually goes: kids grow up and move out and parents get old and move into a smaller place or assisted living (if they can afford it). Only when a medical emergency comes up does anyone confront what happens to mom, dad, grandma and grandpa when they can no longer care for themselves. This reality is made even worse when you consider almost half of Americans don’t even save for retirement.

Seventy-five percent of Americans nearing retirement age in 2010 had less than $30,000 in their retirement accounts. The specter of downward mobility in retirement is a looming reality for both middle- and higher-income workers. Almost half of middle-class workers, 49 percent, will be poor or near poor in retirement, living on a food budget of about $5 a day.

To maintain living standards into old age we need roughly 20 times our annual income in financial wealth. If you earn $100,000 at retirement, you need about $2 million beyond what you will receive from Social Security. If you have an income-producing partner and a paid-off house, you need less. This number is startling in light of the stone-cold fact that most people aged 50 to 64 have nothing or next to nothing in retirement accounts and thus will rely solely on Social Security. – Source: NY TIMES.

I’ll be the first to admit that thinking about death, especially our parents, is a scary proposition. Ignoring the problem, however, is not a solution. Because of the situation our family faced, I had an uncomfortably frank conversation about death and old age with my own father. He asked to be placed in assisted living or a retirement home when the time came. I asked him why, and he responded, “I don’t want to be a burden.” Even when he wasn’t being a burden at all, this is the attitude my father has always had. At the time, I didn’t know how to respond. I didn’t want to imagine a life without my parents in it. I’ve been saving (likely not enough) for retirement since my mid-20s. However, I’ve only been saving for my own retirement and until recently, I hadn’t given much thought to what would happen if my parents (or eventually my wife’s parents) needed to depend on me physically or financially. Honestly, I still don’t know how to address the issue.

See Also:  A Quarter Season Recap: The Best of Times and Worst of Times in the NBA

Is supporting your parents physically or financially been a situation you or a friend has had to face? How did you/they cope? Do you have a plan – financial or otherwise – for addressing such a situation? Do you expect to provide for you parents during retirement and are you saving enough for your own retirement? What will be your expectation for your own children in their role in supporting you at an elderly age?