The New Battle of the Sexes: Do Men Prefer Dumber Women? 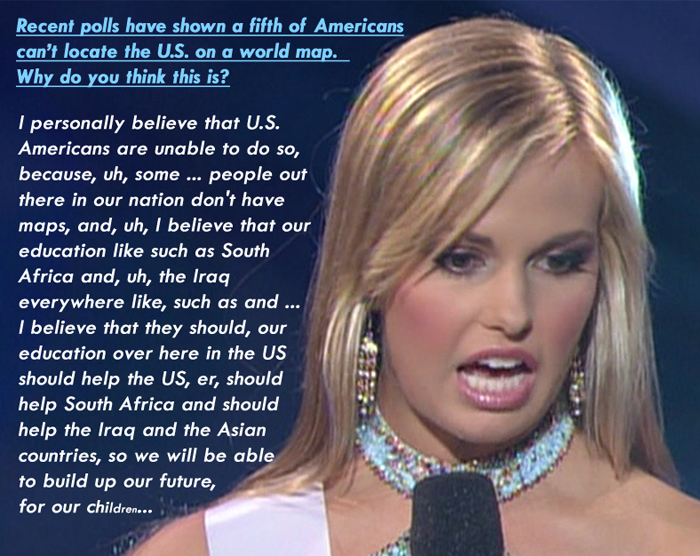 It pains me to say that I honestly don’t know the answer to today’s question. Until last week, I might have confidently responded, “No” and laughed at the ridiculousness of the question. Then this happened: I was on Twitter and after observing a conversation about intelligence versus college degrees – please keep in mind that I’m the guy who wrote College Is Pointless – I made the mistake of jokingly posting the following Tweet. 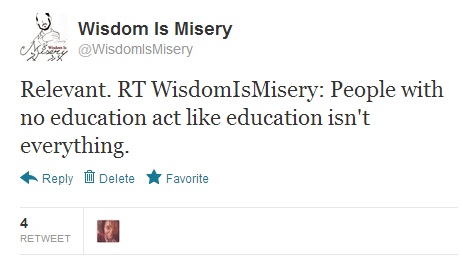 Aside from the profanity laced rage that subsequently entered my mentions, there were a few ironic observations: 1) Most of the anger came from people who admitted to not having a college degree or from people with several degrees (which they were all too eager to tout). This is despite the fact that education is not limited or measured, in my opinion, by college degrees. 2) The statement itself was a remix of a Drake lyric, “People with no money act like money isn’t everything,” which people with degrees and without degrees and with money and without money love to quote. 3) People failed to realize that their misplaced rage – considering the statement in itself was a joke – only highlighted their own insecurities on the subject of education or their perceived lack thereof.

While I agree with these people that college is not the end, I do believe it is the most proven reliable means to an end, especially when you consider that TIME reported that the unemployment rate for college graduates was 6.8% compared to 24% for High School graduates in August. Also, there was that story on the million dollar difference your college degree can make over the course of your career. I’m sure you e-ballers think of that as pocket change, but WisdomIsMisery could use an extra million dollars in his lifetime. Then later still, as if by divine intervention, someone shared a story from the New York Times on the Marriage Rates of Educated Women – and that catches up to present day.

For the most part, I agreed with the article. However, one particular section caught my eye, because it honestly rubbed me the wrong way.

As Kate Bolick wrote in a much-discussed article in The Atlantic last fall, American women face “a radically shrinking pool of what are traditionally considered to be ‘marriageable’ men — those who are better educated and earn more than they do.” – Source: New York Times

The article defines marriageable men as those who are “better educated and earn more.” This seems counterintuitive to the progress modern women claim they want to make. Perhaps I misunderstand the goals of the modern woman, so let me explain my viewpoint. It is my understanding most women want to be equals, at minimum, in the sense that they obtain equal pay for equal work. While the gap has closed in recent years, it has not reached equilibrium. However, if and when it does, then how can a man who works the same job for the same pay not be considered a ‘marriageable man’ because he no longer “earns more,” when this is the very reality women sought to create.

Fact: women now earn degrees at a higher pace than men do, across all races. This rate is almost two to one for black women versus black men. Fact that isn’t discussed as much: due to a myriad of factors – as noted above, most attribute it to gender bias and unequal pay – men still make more money than women. An article on About.com refuting four common myths on black marriage explains:

Black men are more likely than black women to bring home at least $75,000 annually. Plus, double the number of black men than women make at least $250,000 annually. Because of pervasive gender gaps in income, black men remain the breadwinners in the African-American community. – Source: Four Myths About Black Marriage.

Women have redefined themselves, but they have failed to redefine their expectations of what makes a man a man, especially a marriageable man. While women have improved their standing in life, some of these same women now perceive themselves to be above all men who are not equal to, and as the story explains, above them in education and income. An unintended consequence of more educated, higher paid women is that men haven’t changed much in response. It seems that women are working to level the playing field and then complaining because the playing field is too level.

For example, I was speaking with a woman-friend about this topic recently. Specifically, she wondered why I would ever consider dating a woman who didn’t have, at minimum, a college education, when she could not see herself seriously entertaining the same in a man. 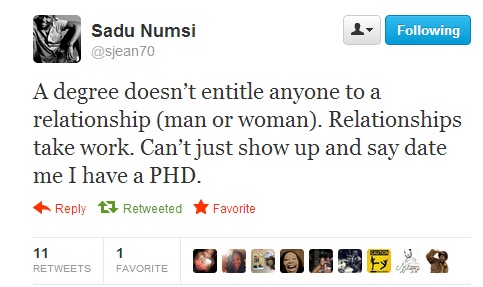 As a college-educated male, meeting and pursuing a relationship with a college-educated woman is the least of my worries for a number of reasons. The most important being that I don’t measure intelligence by number of degrees obtained. Further, I don’t need or expect a woman to provide for me, although I obviously prefer she has some means of gainful employment, so her formal level of education is largely irrelevant. Lastly, I honestly don’t care if my wife is my intellectual equal or superior nor do I expect her to be either one. If I want to have a policy discussion on current events in America and abroad, I will find someone who is interested in those topics. This may or may not be my wife. Maybe she just wants to catch up on the latest ratchet reality show on VH1. This is fine with me. If I am happy with her as a wife, (possibly) mother, provider, giver, lover, etc, then I’m not going to fault her because she meets eight out of 10 things on an arbitrary list I made up before I ever met her. Is this considered settling? Not in my opinion, but for some reason many women don’t see it that way.

See Also:  5 Things We Can Look Forward To With KimYe’s Love Child

As I said in the beginning, I no longer honestly know if men prefer dumber women. A number of men say they prefer an intelligent woman or they have no problem with a woman that makes more money than them, “as long as they don’t throw it in my face.” I still struggle to define what “throw it in my face” means to the average man. Similar to the headache I stumbled into on Twitter, can merely stating a fact or opinion be perceived as throwing your accolades in someone’s face? In other words, to the more insecure men among us, a woman’s honest sharing of her academic achievements or annual income can be taken as throwing it in his face, especially if they supersede his own achievements. Men say they’re ok with a woman who is more educated or who makes more money, but I have to ask the educated or high income women here today if this has been reflected in your reality? If not, I hope this is the minority of men and fortunately, the stats back me up.

Among black women, those with a college degree not only catch up to the marriage rates of the less educated, but far surpass them … education affects ultimate marriage rates by the 30s and 40s much more substantially for blacks than whites.  The only group of women where a majority have not married by age 45 is black women with no college education. – Source: Council on Contemporary Families.

I assumed men were not intimidated by and in fact, sought out women who were successful in areas beyond the bedroom to include the classroom and the workroom. It seems, in some instances, I was mistaken. If perception is reality, then this means that a woman who simply states a fact instinctively turns off some men. Her not shying away from the facts that she is educated, she makes good money, or both causes these men to shy away. Worst still, some of these men even feel the need to tear her down. I’m not a woman, so I don’t know how often this happens but given the testimonials of women I do know, it apparently happens all too often.

See Also:  It's Time to Talk About Gun Control Laws in the United States

Speaking of facts, let’s face another one. The realities of men and women are changing, quickly. I have no idea why men and women are so slow to embrace this inevitability. Further, I don’t know why the inevitable progression towards equilibrium is instead cast as dysfunction with diatribes like The End of Men and rebuttals like Not Quite the End of Men. Maybe it makes for great headlines or page views, but it does little to move us forward. Perhaps it’s naïve of me to think that the rise of women does not necessitate the end of men. It may be even more ignorant of me to believe that more men than not will welcome, rather than reject, the advances of women as long as women realize their rise doesn’t have to result in our fall. I think we can all agree that the game has changed. Maybe it’s time men and women accept that the rules need to change, too.

Ladies, has your income or education been a hindrance in dating? What is the main reason? What, if anything, have you had to do to overcome it? Do you still prefer a man that has more education or makes more money than you?

Fellas, would you date a woman that is more educated or makes more money? Why or why not? What made your relationship succeed or was it a non-issue? Has a woman’s income or education ever caused a problem in your relationship? Did she ever “throw it in your face” and how?