SBM Sports: What Derek Jeter Taught Me About Sports Guilt 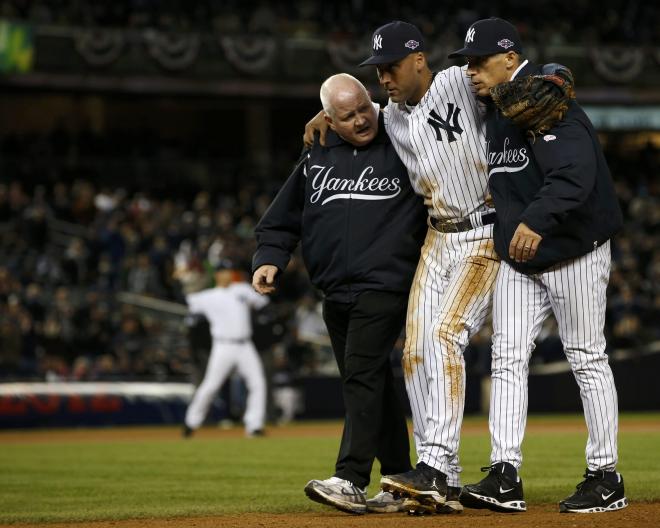 I’m an unashamed Detroit sports fan. This weekend was a great one for people like me. The Michigan Wolverines destroyed Illinois, the Lions finally won, the Pistons have yet to be eliminated from the Playoffs, and the Tigers went up 2-0 over the Yankees. With all these highs, I was surprised to feel like I had gotten away with a watered down victory. 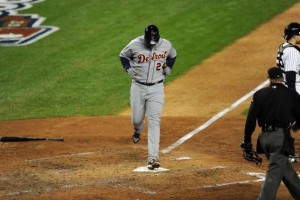 If you didn’t catch it, Derek Jeter broke his ankle in the 12th inning of Game 1 of the ALCS against Detroit. The Tigers had just completed a comeback from a 4-0 deficit and taken a one-run lead. I should have been enjoying the win by sending Ric-Flair-like text messages to my friends (okay, I did get a few of these off). Instead, I felt conflicted. I was deliriously happy my team was one game closer to the World Series and upset that the series would be decided without a signature player. Besides the offensive slumps of virtually every Yankee player, the team’s captain and best player has a broken ankle. How can I fully enjoy that?

Jeter’s injury puts the Tigers in the unenviable position of the favorite that’s supposed to come out ahead. If the Tigers win, they beat a team where half the guys can’t hit and the best player got hurt. If they lose, then it’s a huge disappointment and the Yankees get to be the underdog that everyone is cheering for (excuse me while I throw up into this trash can…ok, I’m back). No matter what, this injury will affect how we talk about this series. Times like this remind me of other instances of “Sports Guilt,” where a major event changes the course of a team’s playoff series, season, and/or championship run. Here are some others:

Sports are hard, if they weren’t, we would all be pro athletes. Sometimes players miss the shot, strike out, or blow a tackle. Other times, players fail at the simplest parts of their sport. The things they have done a million times in practice and in big moments.

When your team wins because someone on another team chokes, do you celebrate the same way? Do you feel any empathy for the choking athlete? 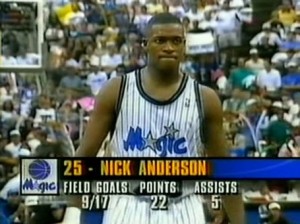 Behind Shaquille O’Neal and Penny Hardaway, Nick Anderson was a great shooter who helped bring Orlando to the Finals. In Game 1 of those Finals, Nick Anderson missed four clinching free throws in the final 10.5 seconds. He became known as Nick “the Brick” Anderson while the Rockets went on to win the game in overtime, and their first of two consecutive championships. Can Rockets fans enjoy 100% of their team’s victory and feel bad for Nick the Brick?

If you’ve ever played pick up basketball, you’ve seen a mini-version of The Fluke. When the worst player on the floor hits the one-handed runner for a game winner? That’s a fluke.

On the professional level, these happen less often and their impact is a million times greater. When a big game turns on a fluky play, the rest of the game seems pointless. The best players in the world are deciding a playoff game, and some lucky play changes everything? Weak. 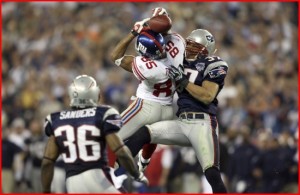 The “Helmet Catch” as it is known might be the greatest fluke of all time. The Patriots came into this game 18-0 and on the verge of a perfect season. Eli Manning, a player who many thought would never lead a championship team, changed his legacy in one play. And David Tyree was an unknown player who never caught another pass in the NFL. All of these factors came together to produce one of the most memorable plays in NFL history. But should it cheapen the Giants’ victory?

These are the games that turn on a blown call by a referee that greatly benefits one team. We all hate refs, that’s a given. Usually, fans of both teams come away from a game saying the refs stink. To me, that means they did a good job: equally crappy on both sides. In rare cases, refs will decide a major game with a bad call (or calls) that leaves one team mad and the other shrugging their shoulders. Truthfully, it’s not the winning team’s fault that a ref handed them a game, but how should their fans react to the controversial victory? 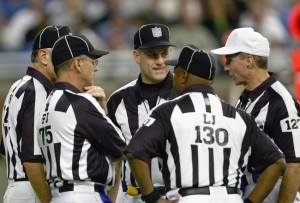 See Also:  Infidelity Rates May be as High as 70 percent

I know Seahawks fans that still don’t believe they lost this Super Bowl in 2006. This game is forever marked by two terrible calls in the fourth quarter that both went against Seattle. The referee of that game, Bill Leavy, admitted to affecting the game saying he will “go to the grave” with regrets about his performance. Ben Roethlisberger, the Steelers quarterback, has two Super Bowl rings, but one will forever be tarnished.

We all want our teams’ success to be defined by a triumphant performance. How do you feel when your team wins with Sports Guilt? Hit the comments and let me know!

previous Can You Really Have Sex Too Soon If You're Both Looking for a Relationship?
next The Blogger Life: 5 Ways Being a Blogger Can Really Screw Up Your Private Life