SBM Sports – Who’s in the Running for the 2013 NBA Championship? 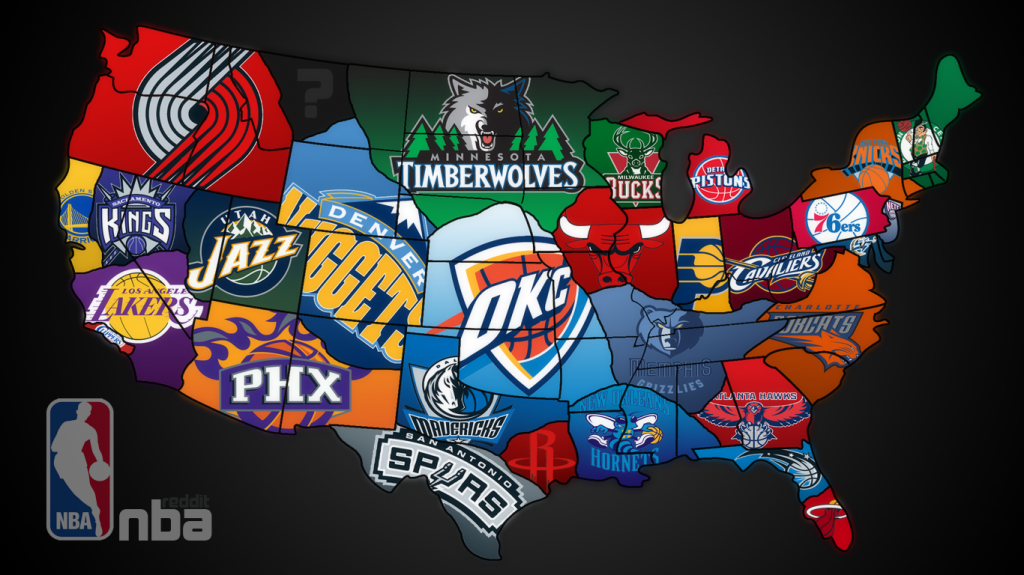 Thankfully, the NBA season is set to return next Tuesday with fresh storylines and questions yet to be answered. As the NBA has taught us, there are only a handful of teams that can really be considered contenders for the 2013 NBA Championship, despite the fact that every team is clinging to hope as the season is about to start (Detroit Pistons only a half game out of the Central Division lead!). I’ll break down those teams and make my prediction for the upcoming season.

Why they will win it: The Heat have to be considered the favorites for a few reasons: they are the defending champs, they made some key additions, and – most importantly – they still employ LeBron James.

focus away from the traditional big-man-centric offense that is the foundation of many teams. The Heat rained wide open threes in the NBA Finals using LeBron James as the offensive centerpiece and taking advantage of defensive rotations. This was obviously a good move (they won the championship after all), and the addition of the game’s best three-point shooter points to even more success. If Rashard Lewis can regain his shooting touch, the Heat could cruise to a title. It’s hard enough to stop LeBron…surrounding him with more shooters could make things unfair.

Why they won’t win it: The Heat showed surprising vulnerability in the playoffs as Dwayne Wade and Chris Bosh played through injury. Miami was behind the Indiana Pacers and Boston Celtics at points in the playoffs. Last year’s run proved that this team is still all about the “Big Three” of James, Wade, and Bosh. The biggest potential pitfall for Miami is their lack of depth. The dropoff from Wade to Mario Chalmers, Bosh to Udonis Haslem, and LeBron to basically anyone could derail their chance at a repeat.

Why they will win it: The Lakers spent the offseason putting together a perfect roster. On paper that is. Dwight Howard and Steve Nash are the ideal compliments to Kobe Bryant and Pau Gasol. Every one of these players can thrive without limiting the production of the other three. They could have a balance on offense that would make them impossible to stop. 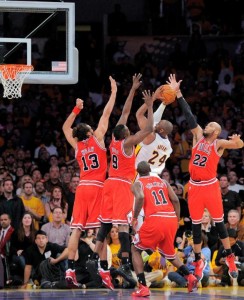 Nash was second in the league in assists last year, so his success actually fuels everyone else. Howard can put up 20 points and 20 rebounds without many plays being called for him. Gasol has already shown he can thrive as the “second banana” on a championship team. The only question I have centers around Kobe’s ego. On that note…

Why they won’t win it: Kobe is a weird dude. He’s spent much of the offseason establishing himself as the leader of the team and dissing his former teammates. This is either good-natured competition or a warning sign that Kobe the Leader will turn into Kobe the Shameless Gunner if the Lakers face a tense situation. As you can see in this picture, Kobe the Shameless Gunner isn’t afraid to take a horrible shot that costs his team the game. He missed that one, by the way.

Besides Kobe’s Ego, the Lakers have a defensive liability that could cost them in the playoffs if Dwight Howard gets into foul trouble. Kobe is no longer good defensively, Nash never was, and Metta WorldPeace is a crazy person. Can’t count on him to stop the other team’s best player. The Lakers might need to be brilliant offensively to mask the defensive shortcomings of everyone not named Dwight on the roster.

Why they will win it: They have the best young trio in the league. Kevin Durant, Russell Westbrook, and James Harden are a couple months removed from leading the US National Team to the gold medal and the Thunder to the NBA Finals. They are great now, and history says they won’t be at their best until about 4 years from now. That’s a scary thought, but it might mean they are further 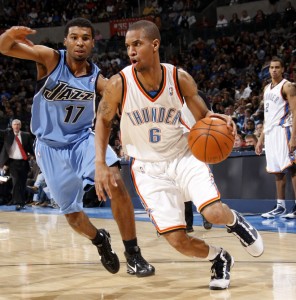 away from a title than it seems.

An underrated addition to the Thunder is the return of Eric Maynor, the backup point guard who missed the bulk of last season with a torn ACL. Maynor is the calm, collected yin to Russell Westbrook’s yang. He provides balance, and can run the offense through Durant if when Westbrook needs to calm down. Having Maynor shortens the windows where the Thunder stalls offensively. Huge for their title contention.

Why they won’t win it: The Thunder big men are a big question mark for OKC. Kendrick Perkins, rather the insistence of the Thunder to keep Perkins in the game, puts a metaphorical anchor on the Thunder’s title chances if they refuse to adjust again. Perkins (and his agent) should be very happy that Dwight Howard joined the Lakers. He now has a function should the Thunder and Lakers meet in the playoffs (they will, but let’s pretend that’s up for debate). If Dwight isn’t in the game, Perkins shouldn’t be either.

Serge Ibaka will also need to improve. Shouldn’t it worry the Thunder that he couldn’t get regular minutes for the Spanish National Team in the Olympics? If Ibaka can be a consistent, viable contributor, the Thunder will be a lot better. I don’t think he’s there yet.

The Teams that definitely won’t win it:

Boston Celtics – Too many “ifs”. Will old age catch up to them? Is Jeff Green good? Can Jason Terry replace Ray Allen? Is Rondo ready to take another step and become a scoring threat? All of these things could happen, but every planet and star will have to align for Boston to win it all. Not happening.

San Antonio Spurs – I have been fooled for the last time by the Spurs. They are a team built for the regular season. Remind me I wrote this when they are a 65 win team with a #1 seed headed into the playoffs. 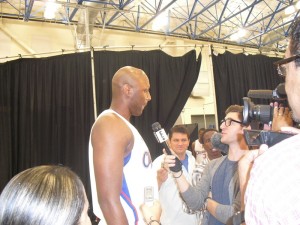 Los Angeles Clippers – They have a talented team, but if you throw everything at CP3, you can’t trust anyone else to take over a playoff game. Plus, their biggest addition, Lamar Odom, is really the biggest addition. He looks like Shaq!

Brooklyn Nets – They are a completely one-sided team. The offense should be good, but Head Coach Avery Johnson is already complaining about the team’s defensive effort. The defense was the main concern when the team was put together, so it’s troubling that this is an issue even before the season starts.

Prediction: I have the Lakers winning a great series against Miami this season. I’ll be rooting for OKC, but the Lakers are put together too well. They’ll be hard to stop on offense, and Dwight will clean up the defense. People have forgotten how good Dwight Howard is on defense as he ruined his reputation the past two seasons. He’ll be even better with a Hall of Fame supporting cast, and will be a key as the Lakers take another championship.

This is the NBA landscape, from my view, as we head into the season. Who do you like to win it all this year? Let me know in the comments below!

previous Dating Women With Kids
next Talking Trash: An Analysis Of The One Track Conversational Skills Of Men