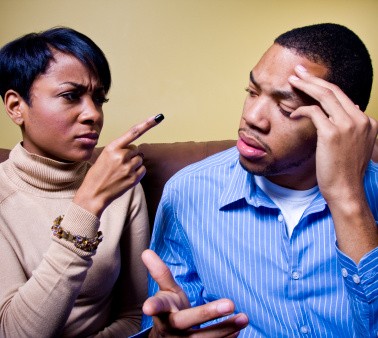 If you know anything about women, you know that there are just some things that you should never say to them. Don’t worry, they brought this on themselves. They say they want men to open up to them, but we’ve got a history book full of stories about men who tried and failed miserably. They say they want the truth, but in reality, they can’t handle the truth. With that said, I jotted down a quick list to get some conversations moving on things men should never say to women.

1. “First off, calm down.” – If you want a woman to calm down, don’t ask her to calm down. I’ve never understood exactly why even when a woman is angry, frustrated, and worked up that doesn’t translate into needing to calm down, but it does.

2. “Are you serious right now?” – The short answer; of course she’s serious. The more in-depth answer; she probably wouldn’t have came to you with the issue if she didn’t want an answer. While all questions don’t warrant answers, that’s not an indication that she’s not serious. Try this,

“You have many questions, and although the process has altered your consciousness, you remain irrevocably human. Ergo, some of my answers you will understand, and some of them you will not. Concordantly, while your first question may be the most pertinent, you may or may not realize it is also the most irrelevant.”

3. “Before you get all emotional.” – Women are emotional beings, but they don’t like for men to diagnose them as emotional beings. They tell us that they are more capable of being nurturing and that they’re minds work differently than men, but the second you tell them that they’re getting emotional, you’sa lie.

See Also:  The Butterfly Fallacy: How stomach butterflies will get you caught up

4. “I don’t know what the hell you’re talking about.” – If women believe in, “delete, delete, delete,” I don’t see anything wrong with men who believe in “deny, deny, deny.” Even if that may be the case, I would tread lightly in ever explicitly denying any inkling of why she may be bringing this issue to the table. I usually like to counter with,

“Can you explain to me exactly what happened?” or “Can you please tell me who came to you with this information or how you found out?”

It’s almost the same thing, but it allows you to get more information before you totally dismiss her.

5. Repeating the question back to her. – The jig is up fellas, they figured out that we’re lying when we start repeating questions back to them. Her: Who is Keisha? Me: Who is Keisha?! That’s just our way of getting a good lie together in a tense situation.

6. Respond to her text message with… “OK.” – We are fully aware that this pisses women off, but we do it anyway. To be honest, women brought this on themselves, they get so angry when you don’t answer a text message and you don’t always have time to give an in-depth response. Personally, if you have time to write an essay via 4-5 text messages to me, I reserve the right to “ok” the text and move on with my day.

8. “Let me finish this game of Madden.” – Unless you have a really awesome and rad girlfriend who plays video games with you, don’t put off a human being for a video game. That’s how things get thrown in the crib. You can pause the game but you can’t pause the dame.

9. “You sound crazy.” – Regardless of the fact that women have a tendency to say things that don’t logically make any sense to anyone but themselves, you can’t use the word “crazy” when speaking with women. Articulate your thoughts a little better instead of saying “crazy” and explain exactly what you mean by that. For example,

“I get the feeling that you’ve been having this conversation in your head for much longer than you’ve been having it with me. Because of that, you’ve probably had many iterations of points in your head that have developed into what you’re communicating now. Can you back up and start over at a point where I can follow your thought process?”

That last one is good right? Yeah, I know, not really. Nonetheless, this is my list of things that you should never say, but what’s on your list? You can share your thoughts on this list and potentially add some of your pet peeves.

See Also:  How Much Does "Experience" Matter To You?