Dream Crushing: Is It Ever For the Win? Let’s Discuss… 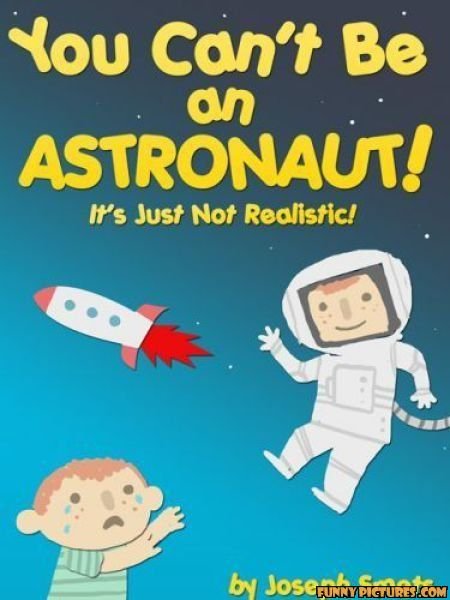 A few days ago, boobookins and I were sittin’ on the couch with laptops in laps. We don’t stare at each other’s screens, but it was obvious we were both on Facebook. I was checking up on a few folks I hadn’t heard from since the storm. She was lookin’ at pictures of children in Halloween costumes, and making those cutesy “aww” sounds (||) that make some men uncomfortable. I’m one of them. Anyway…

While I was checking up on east coast fam, I came across this status update of this guy I went to high school with:

Bout to hit the studio and drop these bars. This storm got me motivated.

I laughed. Not because there was anything funny about the status update, but because of the memory of him rapping damn near ten years ago and being terrible. I think we all knew someone like this; someone that was determined to live free and (metaphorically) die rapping…regardless of if their talents were better suited for building spaceships or walking the talk on Wall Street.

The last I checked (probably 3 years ago), this guy was in med school. Upon reviewing his profile, I saw links to Myspace and realized he decided to pursue rap full-time. Yes. He dropped out of med school to rap and make beats.

See Also:  Should The N-Word Go Away, Or Is It Here To Stay? Byron Thomas, Donald Glover And Dr. J Share Thoughts

Here’s the thing: I’m not clowning the man for pursuing his dreams. I’m bringing this up because it turned into an interesting conversation with boobookins. I told her about the memories of him dropping hot garbage. I told her about how I used to drop hot garbage. Sh*t, I still have a couple terrible songs floating around out there. The difference is I realized I wasn’t going anywhere fast other than the basement. So I put down the mic and left that art to my talented friends.

Boobookins did her “don’t be mean” thing even though I really wasn’t. I clicked on a link to his most recent project and found all sorts of album artwork and professional pics. Then I saw the track list, which had to be 20 songs deep. With intrigue and hope for tolerability, I played the first track.

He improved. More importantly, he no longer sounded like he was trying to be someone else. He’d created his own style. So I clicked on a second track, then a third, then a fourth, then realized he was just less terrible. As she cringed at the high-pitched banter and dearth of rhyme scheme, it was clear she understood my laughter and reluctance. And herein lies the conversation that became the basis of this post:

Me: I know a lot of people are telling him to pursue his dream because he loves it, but do you think someone should tell him this isn’t going anywhere?

Me: Won’t be me. I’m just in awe. At what point do you think a dream like this should expire?

Me: What if this were me rapping and I’d been at it for five years?

Her: I’d warmly say “Hey, so about this rapping. I know you love it and all, but it’s been a few years with minimal success. I believe in you, but have you thought about trying another career you could be great at?” (Important to note she also made cautiously affectionate faces while speaking)

Me: So you’d crush my dreams?

Me: Got it.  *Deletes secret recording program from Macbook*

So how about it? Do you ever think it’s okay to crush someone’s dreams? If yes, at what point? What’s your time limit? How would you convey it? If not, why not? Any thoughts on who has the rights to crush dreams other than the significant other. Have you been a DreamCrusher before? Has someone ever crushed your dreams for the greater good?

I’ma just put the program on my other computer,

See Also:  Why He Married the Regular Girl

tags: dream crushing Relationships Stories
previous The Definitive Guide to the 2013 NCAA Basketball Season
next I Voted Today, Will You? - It's Time To Vote America