Did Chris Rock Tell the Wrong Jokes to the White Audience? 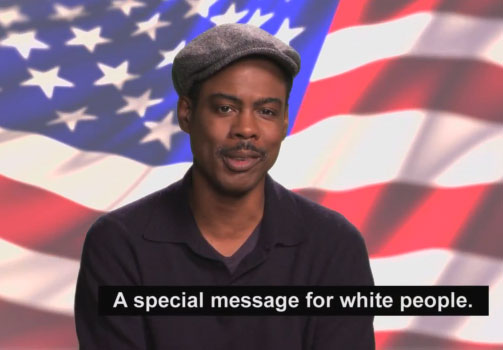 By now, you’ve probably seen or heard Chris Rock’s “Message for White Voters” video that aired on the Jimmy Kimmel show last week. I know. The election’s over and you’re physically and mentally exhausted from hearing about polls, pundits, predictions and public service announcements. You don’t wanna hear another approved message until 2016. I’m right there with you. In fact, I’m so right there with you that I skipped out on watching the video — despite how many times it popped up in the timeline of life — simply because it had the word “voters” in it. That was until Wednesday night, when I opened an email from a SBM reader asking me to check it out and offer some thoughts. But before I go Forward, let me briefly go back .

Over the last three to four days, I’ve had a few non-black people ask me if I saw the video. I didn’t think much of it at that time. I figured it was just Chris Rock talkin’ colorfully about reupholstering ballots…or something. But when I actually saw the video, I realized why people were asking me about it. I’m glad I didn’t know at the time. Because similar to Elon James White in his article for The Root, I’d have felt a little weird, a little uncomfortable.

For those that haven’t seen the video, Chris Rock is basically telling white voters that Obama’s a great white choice because he doesn’t have a stereotypically black background. He highlights a few points — some of which are funny — to show Barry’s whiteness. But one jumped out at me:

If he made this joke in front of a black audience, I’d have thought nothing of it. I probably would’ve laughed like I have so many other times. But the fact that he made it in front of  white folks was kinda bothersome — particularly when I heard their laughter. I’ve seen Chris Rock perform enough to know that he pulls no punches. But there was something…

See Also:  Living in a Bubble: A Conversation on Culture

The state of Black relationships is a topic that’s been trampled in the spirit of Mr. Ed and ‘nem. And as much as it’s been discussed, it’s still a stubbed toe on our collective left foot. Dirty laundry of sorts. Stuff that we should only discuss in our (stereotypically?) broken homes. WE know it’s an issue. WE can laugh at ourselves or amongst ourselves. But it’s not so funny when someone’s laughing at us or, in the case of the people that asked if I’d seen the video, me. Once again, I know. I’m taking it more seriously than intended, but sometimes it’s difficult not to — especially when I end up having to explain, confirm or deny in one of those “Is what he said true though?” conversations. The life of the delegate. Anyway…

Good comedians are incredibly bright regardless of their delivery. I consider Chris Rock to be a great one. And as much as some people will say it is what it is,  I have to ask if it’s possible that Chris intentionally aired us (black men) out in this video to make a greater point? Maybe he wanted to cause discomfort. Maybe he wanted to make me think more deeply about this issue, if even for a moment.  And if that was his intent, this post is evidence that it worked. And it that wasn’t, life goes on until the next joke that causes a little discomfort. I’m pretty sure he ain’t stopping anytime soon.

SBM Nation, what do you think of the video? Do you think think these types of jokes do any harm, or are they harmless?  Did you skip the video all together because you associated it with election hoopla? Do you really think most Black men don’t support marriage? A lot of truth is said in jest. All other thoughts are welcome.

P.S. If you wanted to see the video, here it is: