Identity Crisis: Where Does the Grand OLD Party Go From Here?

In 1856, the new Republican Party fielded its first Presidential candidate in Senator John C. Fremont of California. Fremont would go on to lose to Democratic nominee James Buchanan as we all learned from our American history classes. However, that election was a wake up call that allowed the Republicans to eventually capture the White House four years later on the back of a former Illinois Congressman who had not too long ago lost a race for the United States Senate. That man was Abraham Lincoln. Lincoln’s Republican Party was the one that pushed for the expansion of rights for all Americans. It was a party that recognized the times and had such men who were willing to answer the generational calls to end slavery and perfect our Union that much more.

Over time, as the century turned and big business infiltrated, the party began to become less recognizable in the way that the original Republicans were viewed. (Not saying that the Democrats were much better at this time either because they weren’t). They began to take a pledge more to the status quo and the common man somehow got lost in that mix. Now, this is not an attack on the the GOP fully, because there were fighters such as Teddy Roosevelt who used the Presidency to show that the party still could be a force for the common man (Even if his imperialistic, jingoist foreign policy was a stain on his administration). The great Depression offered a shift with President Hoover and the Republican Party showed they did not understand the issues of the time by attempting to use archaic methods to solve new aged problems. This led to the rise of a New Democratic Party led by Franklin Delano Roosevelt and his New Dealers. With this move, the Republican Party lost a generation of voters by simply not understanding and alienating their electorate, especially with nominees such as Barry Goldwater in 1964 whose extreme conservatism is in a way an antecedent to today’s GOP.

See Also:  Cliff Hanger: The Fiscal Cliff Debacle & Where We Must Go From Here 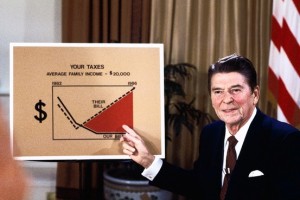 However, the GOP did have it’s star in ole’ Ron Reagan the movie star turned politician, who breathed much needed life into a dying party in the wake of Watergate and its aftermath. His “new conservatism” principles of low taxes for the rich, and small government bore a generation of Republicans who still laud him to this day as some manger-born Galilean, cross bearing figure (Democrats do the same for William J. Clinton in my humble opinion). Reagan is the father of this modern Republican Party, BUT there is a major difference. Reagan and the Republicans of his era – while perhaps not always understanding the broader world in which we were living – understood the necessity of compromise, which has been a major reason why people seemingly genuflect before his image and name. Reagan worked with Speaker of the House Tip O’Neill (a Massachusetts Democrat)  to get things done and showmanship was rarely a thing of the era. That all changed in the Fall of ‘94. 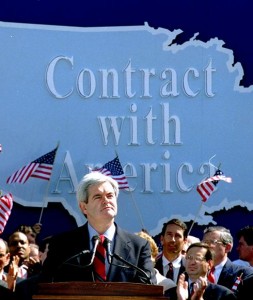 The Republicans were able to recapture the House of Representatives in the 1994 midterm elections–a chamber of Congress they had not controlled since 1946. But, even during the mid to late 1990s we still see the art of compromise from the Clinton White House and Congressional Republicans with issues such as “The Defense of Marriage” (DOMA) and Welfare Reform. However, we can see the seeds of extremism being planted during this time. The powder keg exploded during the George W. Bush administration and has spilled over into Mr. Obama’s nation.

The Republican Party has expressed extreme difficulty accepting the legitimacy of an Obama presidency even though he has won by resounding victories in both 2008 and 2012. They’ve challenged him as too passive. They’ve challenged his American birthright, disrespecting not only the man but the institution as well by calling for a birth certificate to be released. Now, not all Republicans took such a hard line approach but those who didn’t speak surely kept quiet and did not unequivocally deny such actions as farce and abecedarian. Furthermore, this party is shifting further and further to the right, while the country is not moving in that direction. The Republican Party is 90% white and male. With that demographic, they will not survive in their current form for very much longer.  They can invoke the name of Abraham Lincoln despite the fact that they have become a party that has shown charity toward few and malice toward all.

They are a party that has basically taken up left over Democratic Party planks and tried to apply them to a rapidly changing nation. One that is more accepting, more inclusive, and more tolerant of others. Yet, they advocate a regression of rights on many social issues and reject the idea that those with the most among us can be patriotic when it comes to supporting our troops but not when it comes to supporting our economy. The Republicans seem to have one economic policy and that is: cut taxes for the richest among us; cut taxes for corporations and big businesses; eliminate as many taxes as they can; end government control of many public problems and hope that the private sector shows an altruistic hand; deregulate industries; and slash union rights. This Republican Party is NOT built to last. They are drinking cyanide and dying a slow death.

The 2012 election should serve as a wake up call for all elephants in the room. Republicans lost just about every major minority group in this past national election: African Americans, Latinos, Asian Americans, etc. While they did maintain control of the House of Representatives, that is not much of a surprise, considering the high reelection rate for incumbents. However, there are two major observations we should pay close attention to: 1) the Democrats had a net gain of five (5) seats in the United States Senate, when all pundits predicted them to have a net loss of about four (4) and 2) the incoming Democratic caucus is historical in the sense that it will be the most diverse group of Democratic congressman/women ever assembled in United States history. 51% are women and minorities.

The age where white men dominate the Democratic Party has come to a close. It is my opinion that had Mitt Romney won the election, it would have done much more harm for the party than good. It would have affirmed that their current way of thinking is the way to go. They have literally become the Grand OLD Party in ideas and the country said in a loud and clear voice that “we reject these views and tactics.” Now it is time for a makeover. The GOP has to reject the extremist, the panderers and tea partiers who do more harm than good to the party of Abraham Lincoln. Will they let men like Marco Rubio be the face of a new Republican Party or will they continue to reject good Republicans like Olympia Snowe and Susan Collins, while allowing men like Allen West and Scott Brown to dictate the future of the party? The old guard and status quo must be rejected if a new wave is to sweep upon the shores of the GOP beach. I think it can be done and it would be great for this country to have productive debate amongst its parties. But, as of this moment, the Democrats have essentially sealed the deal for a few election cycles if they continue to grow their “rainbow electorate.”

SBM Family–do you believe that the GOP can survive this dark period and emerge as a major powerhouse again or has their fate been sealed with this constant exclusion of major parts of the electorate?

tags: GOP history Presidency reaganomics
previous How to Request an Informational Interview and Get Results
next Sports Hate: The Teams and Players That Make Me Sick