Sports Hate: The Teams and Players That Make Me Sick 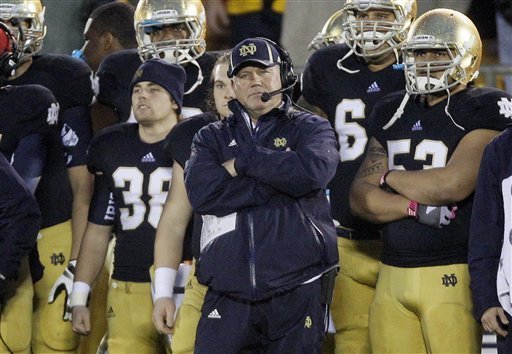 Last Saturday was an awful sports day for me. It started off fine; my Wolverines blew out Iowa on Iowa’s Senior Day. Ohio State won, but it was completely for nothing because they are ineligible for a bowl this season (:-D). And there was some early afternoon NBA scheduled. Nothing wrong with that.

After sundown, it all went wrong.

Notre Dame, the number three team in the nation, shutout a horrible Wake Forest team just as Kansas State and Oregon, the teams in line to play for the National Championship, both took surprising upset losses. And just like that…I was pissed. Notre Dame will play for the National Championship in January as long as they beat USC (whose starting quarterback is hurt) this Saturday. This is one of the worst outcomes I can imagine. Let me explain…

Notre Dame is also the number three team on my Sports Hate Rankings. Right behind Duke Men’s Basketball and Ohio State everything. After cursing at my television for a while, I started to analyze my levels of Sports Hate: the teams that have earned my irrational hatred for a variety of reasons. Here’s how I break it down:

These are the teams and players the media have dubbed as untouchables. When they make mistakes, the commentators find a way to blame it on someone else. When they do anything even remotely good, the media goes overboard to praise them. Just like parents when their kid draws an ugly picture of a bird…yeah it’s ugly, but they need the encouragement. This is especially frustrating because it assumes fans are either blind or stupid. Thanks, John Gruden, but I just watched Peyton Manning throw a wounded duck directly to the defense. Please don’t try to convince me that it was somehow the receiver’s fault.

Peyton Manning – The king of the “It Ain’t My Fault” interception. And get off my TV with all those stupid commercials. I’m never buying a Buick. Look at that smug face. Ugh.

Brett Freaking Favre – The king before the king. He has as many rings as Trent Dilfer, and more interceptions than anyone ever. Glad he took his Wrangler jeans back to Mississippi.

Duke Basketball in General – Did you know Duke has a scandal currently hanging over its head? Seems like news, right?

Tim Tebow – ESPN set up shop at the New York Jets’ training camp this season so we could watch the team’s punt protector overthrow receivers and generally be terrible at football. Who approves this crap?

Of all the teams I Sports Hate, these are at least somewhat justifiable. My dad indoctrinated raised me as a Detroit sports and 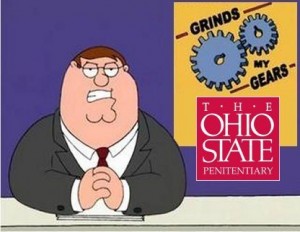 Wolverines fan from birth. I wore number 4 as a kid when I played basketball as an homage to Joe Dumars and Chris Webber. I had no say in the matter. Since he did such a good job turning me into the Manchurian Candidate, I can’t stand Ohio State athletics or that stupid “THE” they put at the beginning of the school name. We get it. You went to the state college of Ohio. Congrats?

Sadly, since most of the teams I root for are so bad now, I can’t consider any professional teams a rival. Your team has to realistically have a chance to win to think of their team’s “rival” as an actual rival (with no quote marks).

Ohio State Buckeyes – The only one for now, but I reserve the right to change this list as my teams become less terrible.

As a Sports Hater without boundaries, I usually keep a few spots in my rankings for teams and players who distinguish themselves as hateable. These usually make no sense, but Sports Hate is irrational – I don’t really need a reason.

OJ Simpson – Set the race back a few decades. Once he tried to sell the If I Did It book, I was officially done with him.

Miami Marlins – Their commitment to fielding a terrible team and running it like any other commodity makes them so very hate-worthy. Last week’s trade moved them up a few places.

New York Yankees – Mostly because of their fans. Yankee fans in general feel their team’s success is a birthright, Mariano Rivera is Jesus, and we’re all idiots for cheering on other teams. This makes them pretty terrible to be around during baseball season. Since that lasts 162 games and 7 or so months, it makes the Yankees a fun team to root against.

I think that wraps up my Sports Hate pretty well. What about you, SBM Sports Fans? Who are the players and teams that get under your skin? Do you always have a good reason? Let me know in the comments below!