What’s on A Black Man’s Wishlist? 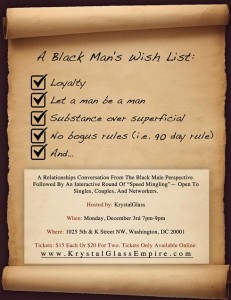 I can’t be mad at Black women when they say that Black men don’t have a clue what they want. It’s hard even getting a straight answer out of a Black man on what he really wants out of a woman. It’s different for each of us. But at a very basic level, what’s on our wishlist? Well, is there even a such thing as a wishlist or do Black men find themselves in a position where we choose a type of relationship over the characteristics desired in that relationship? Let me run that back, are we more likely to want to be married or in a relationship than we are to have our wishlists satisfied? That may explain why some women are left scratching their heads when they see a man settle down into a relationship. Almost to say, “You said you wanted ‘A’ but you ended up with ‘B’? What gives?!”

On Dec 3rd, I’ll be joining an all-male panel in Washington, DC to discuss what’s on a  Black Man’s Wishlist. When it comes to relationships, no man’s wishlist will be the same as another man’s. Some men put “loyalty” at the top of their list, while other men put “good-sex” at the top of theirs. Regardless of how extravagant or simple the wishlist, there are some basics that should be on every man’s.

Last week, I talked about certain questions that couples should be able to answer. Those questions don’t need to be answered on Day 1, but at some point there’s an expiration date on when it’s appropriate not to know the answers. Nonetheless, here’s a short list of the basics of my wishlist or the components that should be present in every man’s wishlist:

I could have spent a long time talking about looks and body types; but to be honest, I’ll hold steadfast to this point: These four components are more important than looks when I seek a long term relationship. I have dated a dime piece who stressed me out to no end; I’m no longer dating that dime piece. I have dated women who I could kick it with 24/7 and everything was easy-going; and those that I’m not dating, I consider, “the ones who got away.” Listen no man looks back over his dating history and says, “Man that girl was beautiful, she was the one who got away.” They look back at those women who had the intangibles and components on this wishlist and that’s when they say, “Acting like a fool, that’s the one that got away.” That leaves us with a feeling of hoping that another one will come along one day, or at least it gives us reason to keep searching.

I’ll be discussing this Wishlist and other topics as well at the upcoming panel. If you’re in DC on December 3rd, join me for the “Black Man’s Wishlist” event. For tickets and more info go to: www.KrystalGlassEmpire.com

tags: bus boys and poets krystal glass panel discussion wishlists
previous 30 Things All Men Should Experience by Age 30
next How One Man Became Jaded Part I