Home Around the Web Author Compares Legalization of Marijuana to Gay Marriage
Around the Web
Other Stuff We Like
December 7, 2012 TheSUNK 2 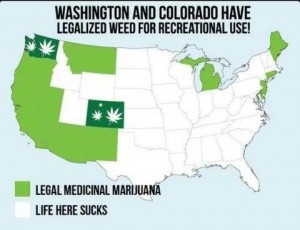 Washingtonians can smoke marijuana legally on the West coast. In this article “With Pot as With Gay Marriage, Familiarity Breeds Tolerance” the author compares smoking that funky buddha to gay marriage equality, saying that the more we are introduced to these behaviors the more acceptable it will become. He could possibly be on to something here:

Just as an individual’s attitude toward gay people depends to a large extent on how many he knows (or, more to the point, realizes he knows), his attitude toward pot smokers (in particular, his opinion about whether they should be treated like criminals) is apt to be influenced by his firsthand experience with them.

It is therefore not surprising that generational differences in opinions about marijuana legalization reflect generational differences in marijuana use. According to the 2011 National Survey on Drug Use and Health, most Americans between the ages of 12 and 60 have tried marijuana, while most Americans in their 60s or older have not. The highest rates of lifetime use (around 57 percent) are among people currently in their late 20s, late 40s, and early 50s, while recent use is most common among Americans of college age, about a third of whom admitted smoking pot in the previous year. People 65 and older have the lowest rates of lifetime and past-year use (12 percent and 1 percent, respectively). People younger than that, even if they have never smoked pot, probably know people who have, and that kind of personal experience provides an important reality check on the government’s anti-pot propaganda…

As with gay marriage, attitudes toward marijuana are also strongly associated with party affiliation, reflecting the plant’s persistent countercultural connotations. In the Public Policy Polling survey, which was commissioned by the Marijuana Policy Project and conducted from Nov. 30 through Dec. 2, Republicans were much more likely than Democrats to oppose marijuana legalization (56 percent vs. 28 percent), to say marijuana is not safer than alcohol (58 percent vs. 29 percent), and to favor federal interference with state legalization (46 percent vs. 26 percent). Those numbers suggest at least some Republicans put federalism ahead of their anti-pot prejudices, although not as many as a consistent constitutionalist would like. The same poll suggests that Democrats overwhelmingly favor states’ rights (by a factor of more than two to one) on this one issue where they happen to like the policy outcome. Republicans look more principled in the CBS News poll, where 65 percent of them said states should determine whether marijuana is legal within their borders, compared to 55 percent of Democrats, even though Democrats were more likely to say pot should be legal (51 percent vs. 27 percent).

Can marijuana use and gay marriage discrimination be compared? Is this better than comparing gay rights to civil rights? Is weed legalization in the entire U.S. imminent?