Why Some Men Are Afraid of Women 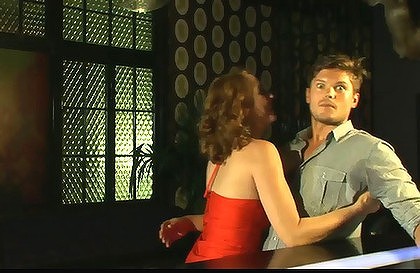 Some men are afraid of women. I don’t mean physically – although some men are physically afraid of women. I mean mentally. Mentally speaking, most boys are terrified of women. This is why boys tell so many ignorant bold-faced lies that they could in no way shape or form ever get away with. There are “grown men” at this very moment denying to some woman that it’s not them clearly pictured in an Instagram/Tweet/Facebook photo. The Shaggy ‘It Wasn’t Me’ defense is in full affect.

Many women here can attest that men tell stupid lies. Lies they have no business telling and likely won’t get away with anyway. I’m not saying women don’t lie, because they do. Women are The Walking Dead of living liars: fake hair, fake eyelashes, fake nails, make-up, heels, plucked this, shaved that, altered lips, breasts, and butts, and the list goes on and on. Despite all the visual deceit – which I’m sure many women will say is a man’s fault anyway, because we all know everything a woman chooses to do is inadvertently a man’s fault – many of the verbal lies women tell are fairly logical. I’m not encouraging lying, but if you’re going to lie, go big or go home, like this girl.

Like many of us, men included, you’ve probably wondered to yourself: Why do men lie, even when they don’t have to? The answer is simple: men are scared of women, especially the “unknown” reactions women might have if they were engaged in a serious conversation and treated like the adults they are. As someone less eloquently stated on Twitter, “Women have to go crazy…in order to deal with men.” There are many reasons why this condition exists. but I’ll stick with the simplest explanation. There are many reasons why some men are afraid of women.

Women are free(er) to be emotional. 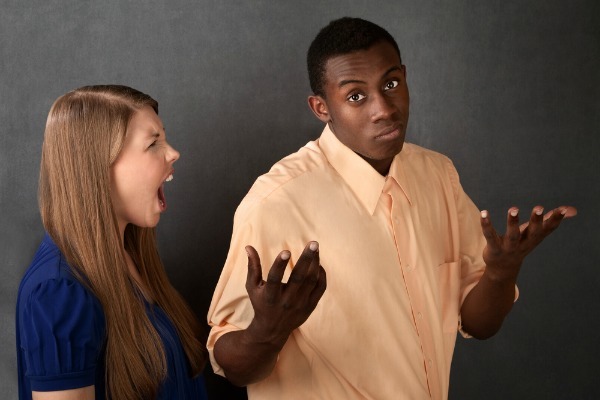 Men hate emotional confrontations. I cannot stress this enough. HATE IT! When confronted with emotion, a number of men will shut down. If they have the option, they’ll avoid it all together. This mentality is bread in us at a young age.

The other day, for instance, I was playing with a three-year-old girl. Somewhere along the way we had a misunderstanding. I don’t know when’s the last time you argued with a child, but it’s definitely not an activity I would recommend for the faint of heart. The political correct barriers enforced on adults don’t hamper children. If a child has something on his or her mind, they’re going to let you know. They think you’re ugly, they tell you. They wonder what that fat roll feels like, they poke it. If they don’t like you, they tell you in no unconditional terms, “I don’t like you.” WIM love the kids, but I’d be doing you all a disservice to pretend like they don’t come from a different planet. If men are from Mars and women are from Venus, then children are from Pluto.

See Also:  Yikes, My Crush and Ex Flame Are Friends

I say all this to say, at one point said child-woman and I disagreed about the outcome of a playtime activity. I started to plead my case, like an adult. She didn’t bother with all that logical, adult-like nonsense. She started whining, and then she hinted as if she might cry. I emphasize the word might because she didn’t even get to the second-gear of crying. She was still in neutral and I caved to her whims – like a punk. As I was reflecting on this event many hours later, I realized that I undoubtedly set the wheels in motion in her little three-year-old child-like-woman-mind. In Seinfeld terms, “she had hand.”

The worst part is that she didn’t even play her cards! For all I know, she was bluffing, but instead of calling her on it, I folded! Unbeknownst to me at that time, like the butterfly in Africa, my actions likely set in motion a trillion microscopic, undetectable events in the universe. This will lead to an inevitable apex in the form of a hurricane-like torrential downpour of emotion upon the wide-eyed, clueless head of her future husband. I feel like I owe this anonymous future-man a heartfelt apology! By simply balking at the IDEA of her crying, I became the accomplice to a long string of men that she will surely manipulate to her will, using only the THREAT of emotion. Heaven forbid she actually got emotional!

Flipping the script, had this been a small boy, I would have definitely called his bluff. If he started crying, I’d have pushed him in the center of his still-developing-fragile-boned chest and told him to “MAN UP!” in an emphatic and equally masculine baritone voice. For him, setting in motion a butterfly-effect that climaxes in gale force winds filled with sarcasm, suppressed emotions, and passive aggressiveness upon the furrowed eyebrows of his future wife!

I’ve written about women, men, and the un-comfortableness of follow-up questions. In all seriousness, if I had to, I could probably answer all remaining questions for the rest of my life with some combination of: Yes, No, I don’t know, I don’t care, and a series of hand gestures and facial expressions. That’s really all I need. There’s only two reasons why I haven’t implemented this strategy full-time:  1) women and 2) work. If it wasn’t for those two, I’d spend most of my day all the way STFU – and I’d be happy as a lark, too!

(Most) women aren’t like this. In writing, in order to sufficiently address a question they recommend you explain the who, what, when, where, how, and why? These are the fundamentals of story development. Unfortunately, these are also the fundamental elements women want addressed when they ask a question (and they ask a lot) of the men of importance in their lives. Conversely, as a man, all I want to know is what happened and why it matters? If you don’t believe me, just observe the fluid discussions of a room full of women versus the fluid silences of a room full of men.

A real life example of this happened to me the other day. I had a good friend in high school and college. He got married soon after and we fell off, but we have a mutual friend in common whom I still hang out with. One day, our mutual friend informed me that my x-college buddy has a son…a two year old son. That means for two whole years, my x-college buddy and close friend didn’t think to let me know that he had a son. Did I panic? Did I question the status of our friendship? I ever wondered if he was upset with me? Did I send a passive aggressive text message to my x-college buddy demanding he explain himself? Did I see this omission as a reflection of me, the world, and an attempt to destroy my dynasty and I on a personal level? No. I did none of those things. I said, “cool.” I got his phone number, text him for a little bit, caught up, and I moved on with my day.

But, when a man loves…

Here’s the thing, nothing changes, but things improve. When a man isn’t emotionally invested, he will go out of his way to avoid anything that resembles emotion. As I touched on in the 5 Ways Men Break Up With Women, this partially explains why a number of men would rather opt out of having a difficult discussion at all than have an open and honest discussion with a woman they like/love.

However, when a man truly loves a woman he must make a change. A lot of men won’t admit this because, as the pattern today suggests, some think it makes them look weak, but looking weak for the woman you love (or placing yourself in a position you are uncomfortable with for her benefit) is one of the strongest acts of devotion a man will ever make. Since making acts of devotion and expressing themselves – in areas they are comfortable – occurs naturally to women, many don’t see the big deal. Being emotionally honest for women is socially accepted, if not expected. On the other hand, a man spends his whole life taught that emotion equates to weakness, yet when he’s in a relationship, a woman expects him to suddenly shed decades of conditioning and open up to her in all areas – especially emotionally. While this doesn’t make sense, willingly doing so is what separates the boys from the men and hopefully, the x-boyfriends from the soon-to-be or current husbands.

See Also:  How to Be a Great Girlfriend

For many men, it’s not the physical displays of love that will prove difficult. It’s the act of opening himself up emotionally – even to the woman he loves – that will be one of the most difficult acts he has to overcome. Even more intimidating, this raw exposure is insufficient if performed only once. Instead, showing your love and devotion is a constant, and often uncomfortable, act of reassurance and emotional testimony the woman in his life will want and need. As I said in the beginning – and will say again in the end – this is why men are afraid of women. Men recognize the transfer of power truly opening themselves up to a woman entails, which is why many seek to avoid rather than embrace it. When the going gets tough, the boys get going. Men stand up to all the challenges that stand before them if it’ll benefit the ones they love.

Fellas, did you ever have to actively practice opening up emotionally to the woman you love? Did it occur naturally or did she inspire the change? Do men avoid tough conversations or blatantly lie to cover themselves or because they genuinely believe women can’t handle the truth? Are men really afraid of women?

Ladies, what are some frustrations you have with men and their fear of open and honest conversations? Given the opportunity, do you think you could handle the truth if more men volunteered it? Do women have to overcome a similar emotional struggle when falling for a man?

tags: a few good men fear honestly love maturity Men truth you can't handle the truth
previous ﻿Can Men Really Be Alone?
next The State of Black Marriage: Whose fault is it?