Home Featured I Don’t Know No Kionna: When You Run Into Your Ex with Your Current
Featured
Rules of Engagement
Single Black Mail
December 13, 2012 Jeff J. 10

I Don’t Know No Kionna: When You Run Into Your Ex with Your Current

You’re out with your current beau/gal at a lounge and spot someone you used to kick it with. Dang, they saw you too! :-/ From that point forth, you avoid eye contact, but you can feel them looking at you every 1.5 minutes which you are enjoying laughs and giggles with your main squeeze. You make it through the night without any interactions with the “old thang” but you feel bad about not speaking since really there is no bad blood between you two (and if you were alone you would have been cordial and polite). Oh well, you just hope he or she understands. Seriously, what is the protocol when you are out with your new boo and run into an ex-fling? Should you point the person out to your new boo and dish the dirt or sweep the chicken bones into the closet? Is it okay to avoid speaking to your old him/her in order to avoid a million and one questions from whoever you are currently with or is that seen as being shady?

This situation happens more often than we would like to admit. If you live in the same city as a former lover/significant other, and you’re dating a new person in that same city, chances are a run-in is inevitable. Take it from a dude who lives in NYC, a city of 8-9 million people: close encounters of the awkward kind can and WILL happen. Mathematically speaking, the law of averages, coupled with the law of attraction divided by your Kevin Bacon number usually yields a high probability that you can see someone you used to date while you’re on a current date.

Before we get into the proper rules of engagement, let’s go over what the desired circumstances are for each person in this situation. 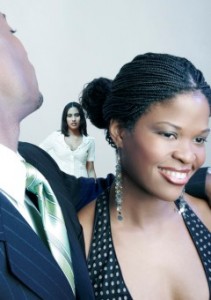 Women will tell you that they hope that they look extra cute and sexy, so no trace of wackness can be detected in their aura. They want to put you on your heels visually, and inherently want to impress whoever this “new b*tch” is, as we all know women live to show off for one another.

Men are similar in that they don’t want to look like a clown in front of their ex flame. It isn’t so much to impress as it is to give off an air of status. Usually you want to look like you are having a ball. You want your life to depict a continuous music video, with Lil Wayne’s “No Worries” blasting at the highest of octaves, and women smiling happliy as you pour up. DRANK. head shot. DRANK. sit down. DRANK. stand up… You want to let whatever dude she’s with wonder why you’re so happy after her. It’s petty, but accurate.

For the person with the current boo who sees the former

You mainly want no crazy confrontations. Depending on how the relationship ended (or if it’s really over?), you don’t want any problems. You also don’t want them to see you with a subpar “replacement.” Admit it or not, we all have egos, and we like the prevalent perception to be that we upgraded. Yes, you can upgrade partners in areas other than looks, but we don’t see personality from first glance.

What is the protocol when you are out with your new boo and run into an ex-fling?

To make this decision, you have to know who you are with and you have to know your ex. If this is a first date situation, it’s a little different, but the core principles remain the same. Either way, I think you should acknowledge that you see the ex, and suggest a plan of action. You don’t know if the person you’re with will feel awkward about you chatting up your ex while they are with you. At the same time, to disavow knowledge of your ex can lead to mistrust down the line, especially if you see them again. Men, you KNOW women have crazy memories, so don’t think they won’t notice the same woman twice, even if it’s YEARS apart!

There’s nothing wrong with saying what’s up. If you two truly don’t speak anymore because it ended badly, than so be it. I would briefly put that out there too, so that you don’t feel forced to be fake cordial for the sake of being an “adult”. On the other hand, not saying ANYTHING at all makes you look like you have something to hide, and depending on what you want to build with your current flame, it can be detrimental for your relationship.

See Also:  The Strain of Being Mr. Nice Guy

SBM Readers, what would you do? Would you take the DMX “I don’t know no f*ckin Kionna” route, or would you speak up, and why? Are there situations where it’s better to say nothing at all?

tags: ex-boyfriend ex-girlfriend
previous A Few Relationship Truths You Need to Know
next Could You Wait Until Marriage for Sex with a Non-Virgin?