Home Featured Groups of Women: Are They Too Big to Succeed?
Featured
Rules of Engagement
December 17, 2012 WisdomIsMisery 76

Groups of Women: Are They Too Big to Succeed? 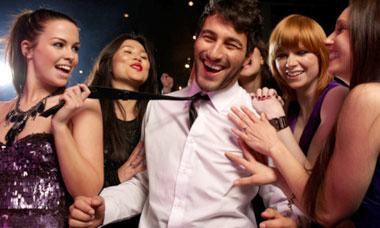 I don’t go out as often as I used to in my younger days, but there is one phenomenon that has baffled me since I was young: large groups of single women “looking” to meet a man. To be clear, most large groups of women aren’t looking to meet men.  Most women (claim they) go out to enjoy the company of their friends, drink, and have a good time. The last thing they (claim they) want to do is meet a man! This is despite the fact that they spent hours shaving, plucking, and dressing in an sexually appealing manner, yet will simultaneously argue that they didn’t shave, pluck, and dress up for other women. So who are they dressed up and looking good for? I have no idea; themselves, I guess.

On the other hand, most men go out to meet women.  Men shave and dress up for women – and they admit it. Some people report that you can’t find your wife/husband in the club – or apparently, anywhere on Earth that men and women might consistently frequent – which is strange, since the people who say this are the same people who frequent these places the most often. But, back to the issue at hand. Why do women bring so many other women with them to places they claim they want to meet a man, and why are they so hesitant to go to those places by themselves?

First, let’s identify the problem. It’s strange that men are allegedly the more competitive of the sexes, and yet it is women who are more likely to place themselves in competitive positions when it comes to dating, usually with their own friends. Sure, you might know you’re the most awesome woman on Earth, but from a random man’s perspective, unless you’re the best looking woman in your group, he might not reach the same conclusion as you. This isn’t a reflection of you. It’s just that he can’t see your extremely awesome personality from across the room, so chances are he’s simply going to go for the woman  who looks the most approachable.

Next on the list of issues with your cheer leading squad-sized group of friends is the fact that a cheer leading squad of women surrounds you. Let’s say we are attracted to you despite your friend  standing beside you. We still have to figure out how to navigate through this team of women. Mind you, this is a team that might be filled with haters, ugaboos, married friends, [Rooster] blockers, and other assorted road blocks to success. Who has time for all that? Even if I have a wingman or a group of wingmen, the success of our brief interaction is often dictated by the success or failure of everyone’s interaction. A group of wingmen is only as strong as the weakest link. If one of my friends doesn’t have game – and we all have that one friend in the group who should have stopped shootin in the gym years ago – we all fail simply because he can’t keep your equally un-interesting homegirl interested in him long enough for us to get to know one another.

A far larger issue is the fact that men are far more willing to accept their role in the group than women. THIS IS NOT UP FOR DEBATE. The main reason large groups of men are far more likely to succeed than large groups of women, aside from the annoying women’s mantra of “we came together, WE LEAVE TOGETHER” – coincidentally uttered by the single, most unattractive woman in the group – is that men know their role. In order for any given group of men to succeed, the actors must know their role and most importantly, stick to the script. In other words, know thy place in the group’s hierarchy. Women, on the other hand, have no sense of kinship. If there’s a corresponding “women’s law,” I assure you I’ve never heard of it.

For example, a group of men might see a group of women and one of two things will happen: 1) long before they approach the group of women, they self-select or verbally select which woman they’re going to approach; 2) a well-oiled wingman team will take a number of sacrificial slaughters, by jumping on a “grenade” if they have to, if it increases the overall likelihood of success for the team. Taking the same scenario with women, since women are generally against approaching men, they see a group of men approaching them and ALL THE WOMEN WANT THE BEST MAN IN THE GROUP AND THEY CONSIDER ANY OTHER MAN IN THE GROUP AN ABJECT FAILURE AND DIRECT ATTESTATION TO THEIR STANDING AS A WOMAN. The day a woman-friend told me that she judged herself based on the type of men that approached her my head almost exploded.

I’m not advocating that women become loners. In fact, if you’re like the zebras of the African Serengeti, then your herd size might act as a deterrent to predators. If that’s what you want or if you’re satisfied with the type of men that currently approach you when you’re with your friends, then I suggest you change absolutely nothing. I bid you adieu and a thousand years of success. However, if you frequently hang out with groups of women ranging from 5 – 55 and wonder why men don’t approach you, perhaps you should consider the scenarios I described above and the affect they are having on your dating life. You might also want to heed the advice from this post, To Grab A Man’s Attention & Combat the Loneliness: Date Yourself. An excerpt:

Last night the Twitter talk became really, really heated! It was based on Nita Gamble’s recent post,  Celibacy? No Problem, Loneliness Now That’s an Issue. There was a question posed by @bruiser_hamwhich basically asked, what are women doing to proactively find a mate and combat loneliness? His question is one that I hear often from men who are tired of hearing us gripe about being “alone” and “single”. The idea of “waiting on God for a mate” – or anything for that matter – is erronously translated as “sit on your butt and do nothing and wait for it to fall divinely from the sky.

As if he were secretly reading our timeline, Gospel living legend, Fred Hammond posed a question to his followers, “The real question is why are single women who are available and want to be out with male company home on a Saturday?” At first, I thought this was a trick question. What is a saved girl supposed to do on a Saturday night? It’s not like there is a Christian Club Convention going on…

However, I had been sitting on the answer to finding a mate this whole time. So, please allow me drop a jewel real quick. Last month, I’d made a decision that I was NOT going to go on dates with what Heather Lindsey defines as “RANDOMS” just to combat boredom and loneliness.

So, what did that mean exactly? For most women, it means that they just sit at home catching up on Reality TV, entertainment gossip, planning “Girl’s nights” that never seem to happen or reading devotionals and talking hair. What did it mean for me? I resolved to go on dates…SOLO…read more.

As usual, as fully-grown, free-thinking adults, you are free to do what you want. As a general rule of thumb, I don’t bother approaching women in groups larger than three (by myself). I’ve found the headache is generally not worth the payoff. Some women think a “strong man” should fight through heaven, Earth, mountains, oceans, rivers and all their  women-friends to engage them in a conversation. A “real woman” shouldn’t have to make any changes or minimal efforts to meet a man, even if these efforts simply meant hanging around less women who have the exact same goals as her, meeting a decent man; thereby reducing her direct competition and improving her overall odds of success at achieving what she claims she wants. After all, if you and 5+ of your equally attractive, awesome-personality equipped friends are standing in a room together, how is a man supposed to differentiate? I suppose he should know that you and you alone are more worthy of attention than the friends standing to the respective right and left of you who believe the exact same thing.

See Also:  How to keep your sanity dealing with frustrating (but irresistible) men

Fellas, does the size of a group of women have any effect on whether you will approach or not? How big is too big (pause)? When approaching a group of women, do you focus on entertaining the group or the individual of interest (e.g. buying everyone drinks versus only the woman you want to talk to)?

Ladies, has the size of your group of women-friends ever had a detrimental effect on your dating life? When you’re looking to be single and mingle do you downsize the group’s size or does it matter? Should a real man approach the group, regardless of size, and take you away or is he responsible for entertaining all women in the group, even if he’s only interested in you? Is it ever a positive or negative if he focuses on the group rather than the individual?

tags: approaching women groups of women
previous Her Words: Confessions of a Crazy Chick
next How One Man Became Jaded: Part 4