Home Around the Web Barack Obama Selected as the 2012 Time Magazine Person of the Year
Around the Web
Other Stuff We Like
World News
December 19, 2012 Jeff J. 2 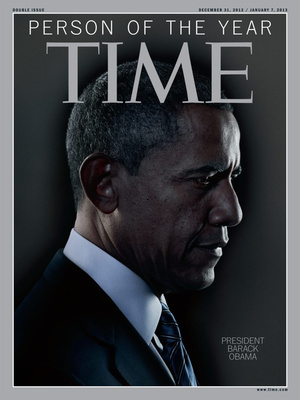 For the second time (2008), Time Magazine has selected Barack Obama to be their “Person of the Year”. He beat out a short list that included Bill and Hillary Clinton, Pakistani activist Malala Yousafzai, Apple CEO Tim Cook, Egyptian President Mohammed Morsi, and Italian physicist Fabiola Giannati, who searching for Higgs boson aka the “God Particle”

“He is the first president to embrace gay marriage and to offer work permits to many young undocumented immigrants,” the introduction said. “There has been much talk of the coalition of the ascendant — young people, minorities, Hispanics, college-educated women — and in winning re-election, Obama showed that these fast-growing groups are not only the future but also the present.”
Source: UPI

tags: obama person of the year
previous Instagram's New Terms Of Use: 3 Reasons Why I'll Probably Quit IG
next Something's Missing: How to Cure Your Emptiness