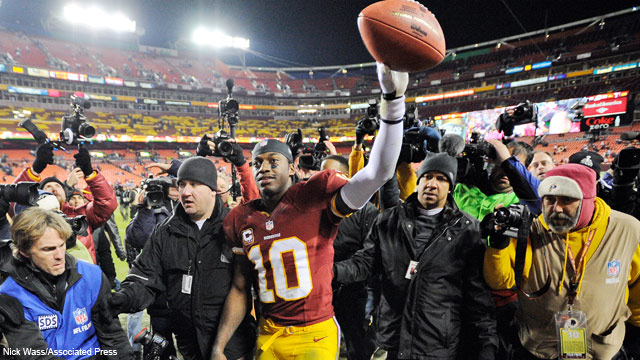 After an exciting Week 17 in the NFL, it’s time to recap a wild regular season and start thinking about the playoffs. Here’s what held my attention the past few months:

Adrian Peterson is better at life than all of us –

It’s true. After tearing almost everything important in his knee in Week 15 last season, AD started this year like nothing happened. He wasn’t even wearing a 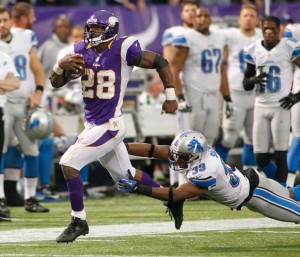 knee brace! I wore a knee brace for a while because pick up basketball was making me feel old. A brace-less Peterson beat every reasonable expectation for his return and immediately dominated the league. Ultimately, Peterson finished 9 yards short of the record for the most rushing yards for a season in history. Adrian Peterson is Black Robocop. There is no other explanation.

Peyton Manning was ridiculous this year as well –

To my surprise, Peyton Manning not only played all 16 games this season, but looked like his old self for much of the season. He made many in Denver forget about Tim Tebow and led the Broncos to a number one seed in the AFC. Neither of these scenarios seemed possible, given that Manning had missed an entire season after coming off of four neck surgeries.

This opens an interesting debate:

See Also:  Everything Is Not Ok in Black America, But What's Next?

Who is the MVP this season? –

My fictional vote goes to Adrian Peterson. He played in a tougher division than Peyton Manning (despite the presence of my awful Detroit Lions), led a 3-win team in 2011 to the playoffs this season (albeit as a six-seed), and routinely faced teams geared to stop him every week. Despite all this, Peterson DOMINATED this year, rushing for 2100 yards – the second most of all time by just eight yards. This is an MVP season by almost any measure. 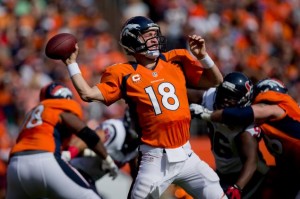 Manning is considered an MVP candidate because of his own improbable comeback and success this season. While Manning’s candidacy isn’t ridiculous, it is a stretch when you look at his supporting cast and schedule. The Broncos only beat two playoff teams this season (Cincinnati and Baltimore), losing to the othergood teams they faced (Atlanta, Houston, and New England). Add to this the guaranteed six wins that come from facing the other AFC West teams and you have enough reasons to give Peterson the award. Plus, I hate Manning. So there’s that.

A Eulogy for Tony Romo as a viable QB –

It was a good run. I actually rooted for Romo to “figure it out” similar to LeBron James before he won his championship. This Sunday, Romo’s Cowboys played the Washington Redskins with “win and you’re in” stakes. The funny thing is, I never had an inkling the Cowboys would win. I’m not a Cowboys Hater by any means, yet I knew Romo would make a fatal mistake to cost his team the game. Sure enough he threw a backbreaking interception that virtually ended the game in the fourth quarter.

Let this be the animated gif on the digital tombstone above the grave holding Romo’s championship aspirations for eternity.

“Here lies Tony Romo’s hopes and dreams. He was killed by his own ineptitude and a variety of internet memes. May he rest in peace.”

Russell Wilson and his rapid ascension in the second half of this season. If only he were more interesting. I cannot wait for his showdown with Robert Griffin III and the Redskins this weekend.

The Atlanta Falcons regaining their title as the Number One Seed That No One Fears. Matt Ryan has yet another chance to make us believe in him before he is laid to rest next to Romo.

Alfred Morris and the fact that he won people more Fantasy Football money than he made this year. I feel like I owe him $5.

The New York Giants actually being dead instead of playing possum until December. Many of us thought they would “turn it on at the right time” when “their backs were against the wall” and other clichés. Turns out they just weren’t that good this year.

So who will win the Super Bowl this year? Here are my playoff predictions:

Super Bowl – Patriots – Brady wins his fourth ring and gets etched into the Mount Rushmore of All-Time NFL Quarterbacks.

That what grabbed my attention this season, what did you find most interesting? Do you have Peterson or Manning for the MVP? Any other choices? Is Tony Romo dead?

Hit the comments section and let me know!

previous SBM Reflects on 2012
next Leave Them Behind: 10 Things to Avoid on Social Media in 2013