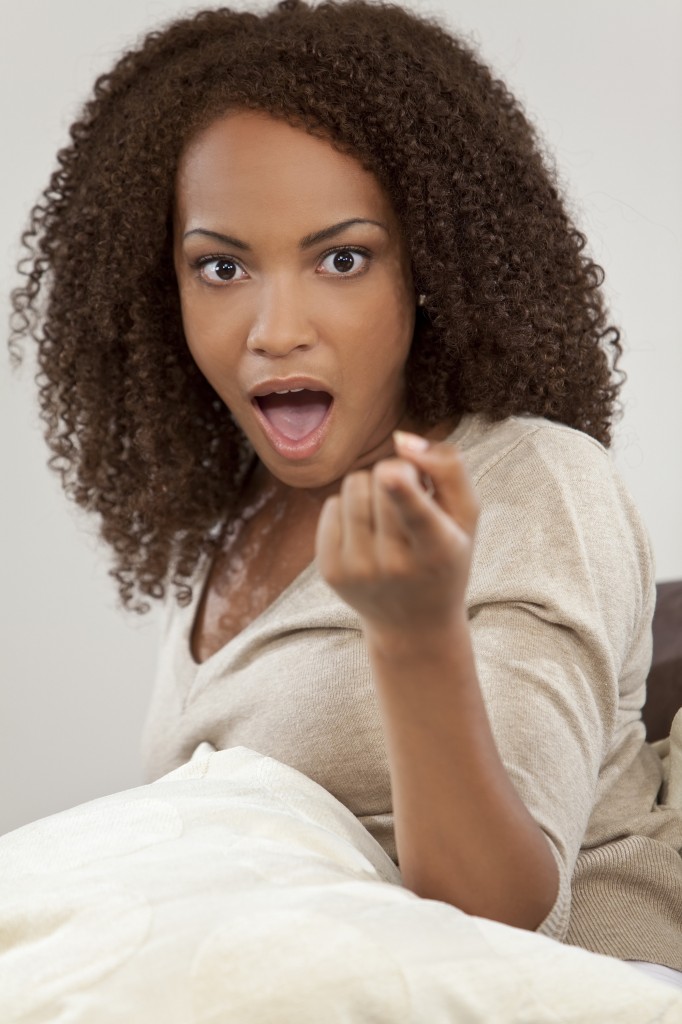 I was laying in bed one time with my girl, well she wasn’t my girl, she was a girl and I asked her, “How was it?” She looked back at me and said, “It was good, I came.” Being a shorty at the time, I asked a stupid question. I asked her, “Hey, do you ever fake orgasms?” She paused for a second and then she sighed and said, “I mean… yeah sometimes.” I got out of that bed so fast, jumped up, spun around and asked her, no I told her, “Look, don’t ever do that with me! If you don’t get there, then let me know.” I thought that was the end of that until one day I found myself in the same position. I don’t like to brag about this, but one night I found myself too engulfed in the grapes of the gods and trying to sign a deed. I tried everything in the Kama Sutra that night and I got nothing but John Henry. I thought to myself, “You’re going to kill this poor girl.” That’s when I decided to just end it, but you and I both know that you can’t mess with a girl’s self-esteem like that. I clinched up, pushed in as far as I could and I let off a shiver. After I did that, I rolled over and laid on my back staring at the ceiling; I wondered if she bought or not. She did. That’s when I knew, sometimes you just got to fake the funk and come back in the AM.

Anyway, LOL… Here’s a recent article from GQ that examines the question, Do Men Fake Orgasms? Trust me it happens more than you think.

Hi, I’ m a man, and I’ve faked orgasms. I’ve put my scrunched-up, communing-with-the-universe, pleasure-stoked little O-face on when in fact I was feeling nothing. I have closed my eyes and groaned like a wildebeest. I’ve even thrown in a few twitchy little shakes at the end like there’s a loose live wire ﬂopping around inside me. I’m not much of an actor, but it’s not a tough thing to pull off. How, exactly? you may be wondering. Is there not, well, proof? Let me put it this way: Orgasms aren’t hard to fake; ejaculations are. Just use a condom, which I and nine out of ten dentists recommend, and you can easily obscure the lack of evidence. (“Excuse me, miss, let me just run to the bathroom and get rid of this unsightly rubber that may or may not contain my semen.”)

The real question here is: Why would any man do this? Don’t we spend most of our busy hours—and all of our bored ones—plotting to get women into bed with us, just to have the opportunity to orgasm? How could I be so ungrateful? So careless with my good fortune?

Point taken. But the problem with that attitude is that it doesn’t account for system malfunctions. Totally natural system malfunctions. Picture this: Woman beneath me. We’ve had sex a handful of times before. The thrill of new sex has maybe given way to the part where I’ve found a comfortable, familiar rhythm and started to scan the spines on her bookshelf. It’s very late. I’m very drunk. Numb. Psyching myself out here now. Plus, I need sleep. In fact, I must sleep. As I rapidly approach 40, if you offered me the choice between the hottest sex of my life or the greatest nap of all time, well, I would have a lot of trouble making that choice. So I decide: This must end.

Perfect sex is pretty much a myth. And men shouldn’t be ashamed of that. When a pitcher has a bad night, it doesn’t mean he’s a bad pitcher. Shit happens. How often does a pitcher even throw a complete game? The manager just comes out, takes the ball, pats you on the ass, and gets some- one else to ﬁnish the job. “Now completing the sex act with your girlfriend, number 42, Mariano Rivera!”

And just to affirm: I conducted a scientiﬁc poll to back up my theory. Nate Silver would no doubt be proud of me. Bars are historically the best environment to get truthful answers, so I asked my pals one Friday night after two beers downed. My friends all had stories; we’re just terrible. Reasons faked were all generally in the same vein, evoking the old sexually frustrated lines of the great Robert Frost poem “Stopping by Woods on a Snowy Evening”: The woods may be lovely, dark and deep / But get the hell off me because I want to sleep. Though one of my friends—let’s call him Tim—offered up the following reason: “Well, she looked at me and said, ‘Are you gonna come?’ because she wanted us to climax together. And I said, ‘Yeah,’ even though I wasn’t close. It’s not as if I acted it out like Meg Ryan in When Harry Met Sally or anything. I just…you know…didn’t.” Ah, the simultaneous orgasm, one of the most despicable lies of Contemporary Love and Sex, rears its ugly head. Can’t we just accept that if a train leaves Boston at 8 p.m. and another train leaves Philadelphia at 8:15, they might not pass each other at the exact same second every night? Well, we should. Sometimes there’s a cow on the tracks at Trenton.

I have this theory that it’s a language problem. We simply don’t have an unloaded way (excuse the pun) of ceasing our Sisyphean thrusting and saying, “It ain’t going to happen.” Or maybe I’m just cowardly. But I don’t want to plant seeds of concern and self-doubt in some lady awesome enough to take her clothes off with me. Which is why there should be a word that means “Okay, please get off—I think this is over now” but contains no malice. Perhaps “Ziffer!” Ziffer, vb: I’m polite and tired, and I have to stop now, but you’re great, okay?

See Also:  A Rational Fan's View of the Dwight Howard Trade to the Lakers