Sometimes it’s hard to find inspiration among all the bad news that dominates the headlines, and unfortunately, many of those bad-news headlines are indirectly or directly about the Black Community. Fortunately, we found a welcomed exception to the rule last week when an SBM reader shared a story with us about a ‘brother’ of his who was inspired to walk from New York to California to raise money for diabetes research, the disease that took his grandmother’s life. Many of us have family, friends, or know someone personally that is or has been affected by this disease. The 30-year-old Sterling Cleveland decided to do something about it. A brief excerpt on his story: 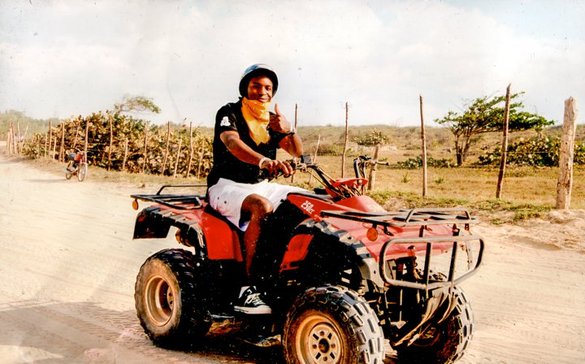 Sterling Cleveland is walking from New York to Los Angeles to raise money for diabetes research regardless of the temperature.

On Wednesday, he was walking near the underpass on Park Avenue East when a photographer took his photo as he used his ski poles to keep his balance.

Cleveland, 30, has worked as a concierge at Cipriani’s at 55 Wall St. for the past seven years.

He began his walk 42 days ago in Manhattan. He plans to end up in L.A. this summer.

“I took time off work,” he said from a downtown eatery before heading toward U.S. 42 in Lexington and down toward Columbus.

After three months of planning, Cleveland said he decided to embark on the journey. His grandmother died of diabetes.

His only mode of travel is his feet. He is sleeping in state parks, public wooded areas, hotels and motels and using the web site, Couch Surfing too.

“I’ve met a lot of great people along the way,” he said, wearing a bright green jacket.

Equipped with a stove, tent, books, an iPhone and iPod, he doesn’t mind the heavy backpack. It helps he is a runner, too. He keeps in contact with family and his 10-year-old son.

“I just ordered a new pair of boots,” he said. He walks about 25 miles a day, sometimes 35 miles.

His goal is to raise $10,000. Working on Wall Street, he said he is confident he can raise the money…read full story.