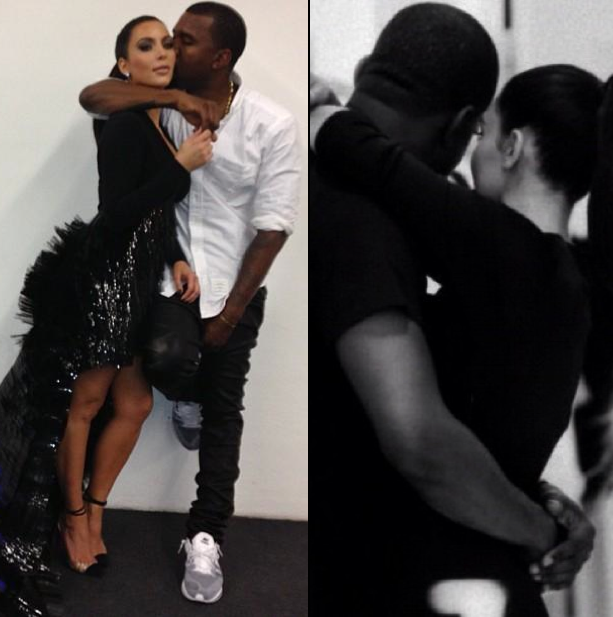 I received several text messages and tweets about a week ago when it was announced that Kanye West got Kim Kardashian pregnant. Everybody thought I was distraught, in tears, or somewhere reenacting the way I felt when the Niners lost last year’s NFC Championship game. I was actually celebrating. I was happy for them and excited to say the least. I immediately thought of the best name for the baby: Pineapple Express. You see, there’s a quote from the movie, Pineapple Express, that I always remember. It comes from the scene where Saul is trying to explain what Pineapple Express is to Dale:

“This is like if that Blue Oyster sh*t met that Afghan Kush I had – and they had a baby. And then, meanwhile, that crazy Northern Light stuff I had and the Super Red Espresso Snowflake met and had a baby. And by some miracle, those two babies met and f***ed – this would be the sh*t that they birthed.”

How else could the child of two of my favorite people be described? I’ve always been a big Kanye West fan — second only to Lil’ Wayne, who I think is the best rapper in the game right now. It’s also no secret around these parts that I absolutely adore Kim Kardashian. Even though I think she’s the antichrist or at least an alien. I mean, there’s just no other way to explain it. Most people talk about how she’s famous because of a home movie. I can tell you at least ten other celebrities who have a sextape, but don’t have $60 million. Everything that woman touches turns to gold. It’s like she couldn’t make a bad decision if she tried.

Whether you care or do not care for Kimmy and Kanye,  there are a few things to note about this wonderful love child:

People flipped out because he called Kimmy Cakes his “Baby Mama.” I read an article about how that was somehow contributing to the demise of Black Love in America. All I could think was, “Baa daaa daa daa aa, that’s how the f*** you sound…” Listen, Kanye is like an E! True Hollyhood Story. He had a hustle that would get him some chicks, he got with a bunch of chicks, found the baddest one on the block and he got her pregnant. Tell me that isn’t what hood stories are made of? I know I’d watch that DVD in the barbershop. By the way, because Kris Humphries wanted to be a [negro], Kanye gets to be an ultra-[negro] because unless Kris signs divorce papers, that baby ain’t Ye’s.

2. The baby is probably going to be the flyest dressed baby on the planet.

Blue Ivy still ain’t got a pair of shoes and she’s almost a year old now, damn shame they do that baby like that. KimYe’s Pineapple Express is going to revolutionize the term, Custom Sneakers. You might have thought Burberry Air Force Ones was the bomb but you aint ready for this. I’m expecting no less than Louis Vuitton booties and a Birkin diaper bag.

Do we know two people who do more crying, whining and throwing temper tantrums than Kanye and Kim? Nope, not anyone. What’s it called when a baby won’t stop crying? Colic? Something like that. I don’t have kids, that I’m aware of, so I wouldn’t know.

That baby is going to cry like it’s got all the Wolfgang Puck custom-made Gerbers stuck in its tummy. Just you wait until that baby gets in a room with Blue Ivy. It’s going to reach down into the depths of its soul to make sure that the spotlight is ALWAYS on him or her. “I’m real happy for you Blue and I’m going to let you finish, but I’m the cutest baby of all time.” #shrug

4. Are the Kardashians not the poster children for interracial dating?

I’ve always said that the reason that more Black women don’t like the Kardashians or watch the show is because all they do is steal Black men away. Khloe got Lamar, Kim has Kanye, Kourtney has Scotty… (oh don’t front, you know that Scotty is nothing short of a negro 24-7) and Kris has Bruce. If Michael was Black and then white, then Bruce was white and then Black. That dude needs to leave the tanning salon alone.

5. For the fifth point, I’d like to present a blend of potential outcomes that would make us fall out like the Fat Boys.

See Also:  Should You Worry If Your Man’s Friends Hate You?

That’s all I got. At the end of the day, if this situation doesn’t work out, they could always just say the kid was Shawty Lo’s and walk away from the situation. In all seriousness, I don’t wish any ill will on KimYe. I am really excited about this and even more excited about the fact that we’re already three months in. Take that down, you know how celebrities have a tendency to carry a child for 10-12 months. Lastly, I’m really excited to see Kimmy and her preggo pictures. I just spent the better part of the last six months in love with Amber and her baby bump. If there’s anyone who can outdo that in my book, it’s Kim.

Take it easy, y’all. I’m going back to the search for Amber Rose. I’ll holler.